by Diane Walls
in Guns
0

0
SHARES
83
VIEWS
Share on FacebookShare on Twitter
Though fitted with various Picatinny rails, the iron sights on the FNH USA SCAR 16S proved effective inside 100 yards.

When I signed up for a 3-gun class to be given by Massad Ayoob at the Firearms Academy of Seattle in September of 2009, I petitioned FNH USA for a SCAR 16S to try out for this class. They let me have one for the two weeks around the scheduled Lethal Force Institute, Level 3 training.

With this short window to do my evaluation, I decided to focus on how this gun handled in close quarters situations that might be encountered in a defensive use of this carbine by civilians. What I wanted to know was how this compared to my AR-15 in ease of use and maneuverability. How was it to field strip and clean? Was it reliable? How were the ergonomics compared to the AR-15?

Gun Details
FNH USA designed this carbine to be familiar to the military operators of the M16. The controls are set up in the same positions with the exception of the charging handle. They moved the charging handle from the rearward position to the left side of the upper frame. Here, it can be easily accessed with the non-dominant hand without moving the firing grip on the gun. It was also designed to be switched from left side to right to customize to the shooter’s preference.

The FNH USA SCAR 16S .223 is the semi-auto-only version of the US Special Operations Command rifles.

As this handle reciprocates during fire, the shooter must be conscious of grip on the gun to be sure not to wrap a thumb over its path and be injured. Whether this positioning of the charging handle would be problematic when carrying the gun on a sling by hanging up on clothing or other gear, I didn’t have an opportunity to discover.

Keeping the shooter’s thumb safely out of the way could be ensured by the addition of a foregrip, should this be a concern. I didn’t find it to be an issue. The safety/select fire switch and magazine release are in the familiar position for the AR-15 or M16 user. These controls are ambidextrous and easily accessed by the dominant hand in either a right or left hand grip. As we were asked to work both right and left side mounts around barricades and during one-handed shooting drills, I found this ambidexterity to be very convenient.

The SCAR 16S is a sexy-looking gun with its stout, polymer stock and grip assembly in desert tan and it’s upper in light earth brown. It bristles with rails along the
top, sides and bottom of the integral receiver/forend, ready to mount any accessories (the military version has a grenade launcher available to mount forward of the magazine well). 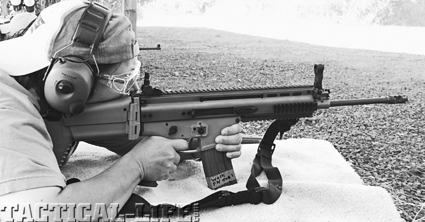 Although designed with the military in mind, it is an excellent choice as a home defense carbine.

The stock is 6-way adjustable for length of pull. I found the action on my specimen to be a little balky to slide in and out. Polymer sliding against polymer takes a bit of time to break in. It has a 2-position cheekpiece to elevate the head for use of optics or lower it to the iron sights. It folds and latches against the right side of the gun for compact storage or handling in confined spaces, such as the interior of a vehicle. The gun is fully functional with the stock folded. The curved buttplate fits naturally into the shoulder and is rather aggressively textured so it won’t slip around once in position. I found it to be one of the most comfortable stocks I’ve used on a long gun.

The well-machined SCAR 16S .223 is simple to field strip and reassemble.

We field-stripped and lubed the SCAR before we took it out to the range to sight in. First out is the trigger module. The stock then slides off. The moving parts assembly separates from the barrel. The bolt and firing pin come out and the gun is ready to clean and lube. The parts are more robust than the corresponding pieces of an AR-15 and we found them to be well-machined. There were fewer tiny bits to worry about losing than with the AR-15, too. Personally, I find simplicity to be a great asset in any tool that will be subjected to vigorous use in a dirty environment. The SCAR had it over my AR-15 in this category. We put it back together and took it out to get a zero before LFI-3.

I chose to run the SCAR with the iron sights only for my training since most of our work would be inside 100 yards. I wanted to get a feel for how this gun would work right out of the box. As we weren’t sure just what would be required for our carbine segment, we did rig a sling for it as the only addition. As it turned out, the sling wasn’t needed for the drills we did.

The iron sights are robust. The front post is contained within a fixed ring. The rear sight apertures were on a stiff toggle, making the shift from small to large apertures difficult. This might loosen up with some wear or a judicious, thin film of lube at the joint. Both sights are easily adjusted with standard tools. I found the index lines, especially on the front sight, to be rather faint and difficult to clearly see. Consequently, it took some doing to set up my zero for the iron sights. Looking through two apertures at the target took a bit of getting used to but I found it aided my eye in focusing better than the post-and-wing front sights of the AR-15. Both front and rear iron sights fold down out of the way for the use of optics, which most people want on a carbine anyway. I found that the iron sights were perfectly adequate for close-quarters work. 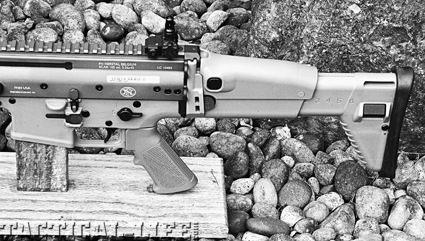 The front sight ring made it especially easy to use a stress-point index at 10 yards or closer. In this technique, the sights don’t come up to the eye for a quick, close shot and the shooter is focused on the target, seeing the front sight riding atop the rear aperture over the point of aim in the lower part of the eye’s field of vision. Simply make a figure eight with the sights and the SCAR put rounds right where I wanted them to go.

The weight and balance of the SCAR made for very easy handling. The basic model I tested weighs in at 7.3 pounds empty. It was easy to use in a one-handed, wounded defender hold, even with my non-dominant arm. A ten-shot string didn’t need to be rushed because it felt nose-heavy and I had no worry that I might drop it (though for safety, we each had a spotter ready to catch the gun should this happen). The buttplate of the stock nestled solidly into my shoulder and braced the gun in position. The entry-style stock on my AR-15, and it’s weight at a full pound more sans optics, makes this drill with it much more challenging for me.

Even with a lighter overall weight, the short piston action of the SCAR dealt less recoil than an AR-15. The push was directed straight along the axis of the bore and lacked the reverberating “twang” I’ve always noticed with any of the AR-15 style rifles. I felt I could shoot this gun from any position and still maintain control for good hits. And it was very easy shooting from braced barricade positions, kneeling or standing, freestanding, dominant or off-hand.

With a folding, collapsible stock, adjustable cheekpiece and ambi mag release, this rifle is designed to be comfortable in any shooter’s hands.

The feel of the trigger was, regrettably, not as clean as that on my AR-15 though it was far from unpleasant. There was a very slight take-up, a firm break and a distinct re-set. The trigger reach from the pistol grip allowed for a perfect power crease positioning, even with my short fingers.

My sample came with only one FN 30-round metal magazine. While the literature recommended use of only FN magazines, I found the SCAR to be very receptive to any high-quality .223 magazines. All fed reliably and both loaded and dropped easily. As I had none of the new polymer .223 magazines to test, I can’t say whether these might be problematic for the SCAR.

I had only 2 failures to fire throughout the class and these occurred one after the other. One of the failed rounds had a backwards primer in it and the other had a light primer strike. Both could have been the ammunition’s fault (at least one certainly was). We were shooting factory 55-grain jacketed practice ammo that had been mixed from several sources into a bulk can for training purposes. I had no trouble clea-ring these malfunctions from the chamber with a quick racking of the charging handle. The gun ran fine after that.

Final Notes
I regret that I didn’t get to do more with the SCAR while I had it. A two-week window with a class going on that isn’t exclusively for carbines only gave me a little taste of what this rifle was capable of doing. What I experienced, however, was impressive. FNH USA has designed a carbine that is going to be a winner not only for military and law enforcement applications, but for civilian defense as well. It’s well-made, reliable and easy to use and maintain. The abundance of accessory rails and it’s modular design makes customization to the shooter very easy. I’d say that fits the definition of a good sporting or defensive carbine for anyone. I sadly boxed it up to send home for the next writer before I could put nearly enough rounds through it for my satisfaction.