0
SHARES
133
VIEWS
Share on FacebookShare on Twitter
The SCAR 17S from FNH USA offers law enforcement officers an opportunity to own their own variant of this 7.62x51mm SOCOM powerhouse. It is shown equipped with a U.S. Optics SN6 1.5-6X scope backed up with an offset Insight Tech-Gear MRDS red dot and a GG&G bipod.

VERY EARLY on in my police marksman career the usefulness of a designated marksman type rifle for police work was strongly evident. Although not for the same reasons used in the military world, the need is still there. Not so much as a standalone weapon for a part of that team, but a gun that would be deployed in concert with a precision tactical rifle. Generally you would deploy with this rifle in your hands and your precision rifle in a drag bag or pack. There are simply places and events where an accurate semi-auto .308 rifle is just perfect for the task at hand.

It needs to be lightweight, portable, and accurate. Not necessarily precision rifle accurate, but accurate enough to engage a 3- to 4-inch target that may be moving. This would need to be done under stress and repeat shots might be necessary. Even more critical than accuracy is reliability — not only reliability, but also combat reliability. That means that it must shoot any ammunition the job calls for and do so without fail every time the trigger is pressed. I have never been one of those police marksman that believed preparation was needed for the hordes of bad guys coming “over the wall.” On the other hand there is nothing like an accurate semi-auto when the need for rapid multiple shots arises. 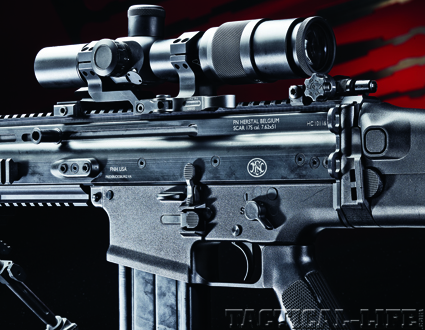 The 7.62mm SCAR features an ambidextrous control set up, made up of an ambi safety and mag release and reversible charging handle.

It was during training at a sister agency’s event center this became abundantly clear. Used as a cover team moving from hallway-to-hallway, the full-sized bolt gun was unwieldy and slow. Although some of the disadvantages could be mitigated with optics changes, often that change hindered the more common job of holding on a house or building for hours on end. The ideal would be a semi-automatic rifle with a low power optic as the primary sighting device. The secondary sighting system would be a red dot of some sort allowing for very fast engagement at ranges of 50 yards and in, especially if all that was needed was center of mass hits.

There certainly are several other systems out there that are fine weapons. Most of them just simply did not provide the accuracy necessary. Many that have the accuracy did not have the ergonomics, armorers support from the factory, or were heavy and not completely reliable. So although many a rifle has passed through these hands, so far the ideal had yet to reach them. That is, until the first time I made it to the range media day sponsored by FNH USA. 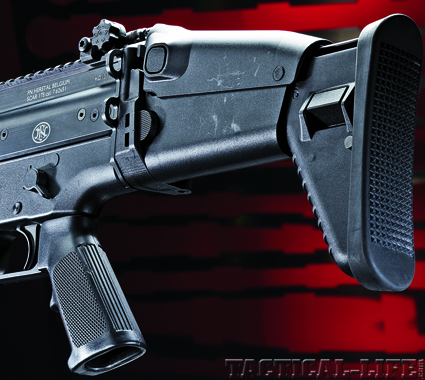 The SCAR 17S sports a fully side-folding modular buttstock that is also adjustable for length of pull.

Observations
Although many a rumor had been heard about the SCAR 17S rifle and they had been seen, the opportunity to shoot them was rare. So when one was made available to shoot at a FNH sponsored shoot, it was time to make some observations. A friend of mine that had spent a great deal of time on a MK 17 Mod O Heavy while in the Army told me it was one of the most reliable 7.62mm rifles in this platform he had used. He also told he was making consistent hits with iron sights at 800 yards making it just plain accurate. Although certainly not an AR-type rifle, the ergonomics are almost identical. Lastly, it was probably the most reliable of them he had used. Having tested the SCAR 16S, if it was at all similar there was little doubt it would meet my needs.

While at the show one of the first observations was how reliable the weapon was. Spending much of my time watching it run, it never malfunctioned. There were a ton of writers there, maybe as many as a hundred and almost all of them took a 10-round turn on the rifle. Many, in fact, took several turns yielding a round count for the day that must have approached over 1,000 rounds. Most true AR rifles would be lucky to get through a third of that or less without a cleaning. In this case there were three or four variants of the system all doing the same thing. That is reliable, and a level of reliability most others simply do not meet. Given what had been observed a request was put in for a test rifle. One finally arrived this week and after two days of trigger time it is pretty impressive.

Gun Details
The rifle that arrived was a SCAR 17S, a semi-automatic variant of the USSOCOM MK17 Mod O. You get a rifle and magazine as well as the paperwork and the ever-important locking device. This particular rifle is black. Handling it out of the box it quickly reminded me of the SCAR 16S. All of the controls are in the same place and the gun is pretty much identical. It is a bit longer in the receiver, but as a whole it feels just about the same. It utilizes the same high-quality sights both front and back.

The stock folds nicely and accommodates just about anyone with its adjustment for length of pull. It also has that very nifty pop up cheek weld adjustment. It is something that will come in very handy for this test. A monolithic 12 o’clock rail runs across the receiver, as well as 6, 3, and 9 o’clock rails. It uses a 16.25-inch chrome-lined barrel that is topped off with a high-quality muzzle brake/flash hider. It also includes an ambidextrous safety and magazine release. The pistol grip is a typical A2 grip but any similar AR style grip will work. It came with one 20-round magazine. When you pick it up the weight, or lack of weight in this case, becomes evident. At eight pounds, it is lighter than some of my regular AR-15 rifles in smaller calibers. It was looking like this may just fit the bill.

In order to wring this rifle out a few things were added. In keeping with my specifications, a lower power optic was added. In this case it was a U.S. Optics SN6. This is a 1.5 to 6 power scope with a lighted reticle. It is the perfect magnification range for most police marksman rifles, especially those used as a DMR. For a fast backup sight, an Insight Tech-Gear MRDS red dot was added at the one o’clock position. This set up has proven to be incredibly fast and very accurate for up close work where you may not want to use the scope. Using the lower rail a GG&G bipod was added for stability. Even with the addition of these items the rifle was still very light, nimble, and easy to carry. It was time to take it to the range and see if it worked as well as it looked.

Range Time
After some break in time, I decided to test it for accuracy both with the scope and iron sights. All of the accuracy testing was done at 100 yards from prone position. The surface was a drag bag on top of dirt. Using the iron sights first the accuracy was surprising to me; it seems my Army buddy was correct. The best group managed was with Federals’ Gold Medal Match and measured about 1.5 inches. Most of the rest were between that and 1.75 inches or so. Since much of group shooting is the shooter and it had been awhile since shooting groups with iron sights, the truth is the gun is probably more accurate. After shooting groups it was time to heat it up. Given one magazine, it was not as rigorous as one would prefer, but about 200 rounds were fired through it from various positions and ranges. Tagging steel at 100, 200, 300, and 400 yards was a cinch. Designed to be a battle rifle in .308 it probably serves that mission well. It would make a great 3-gun rifle in the heavy caliber divisions.

The weather interfered with the rest of the session so the next day it was time to see if the best accuracy could be wrung out of it. Once zeroed, several groups were fired with different types of ammunition. The best group measured at right about 0.50 of an inch. The same 168-grain Gold Medal Match ammunition yielded this group. Most of the rest of the groups were around an inch.
As expected the rifle experienced zero malfunctions. As a last test, a magazine was filled with a smattering of all the ammunition. This included from 150-grain polymer tipped bullets to 180-grain FMJ. It was fired at 100 yards using the scope as fast as the target could be re-acquired after recoil. There were zero malfunctions and the group measured 6 inches, roughly the size of my fist. Honesty most of the other rifles I have tested this way don’t make it through the magazine, especially with the 165-grain tactical loads, let alone doing so with that kind of accuracy. All in all, this rifle is truly impressive. 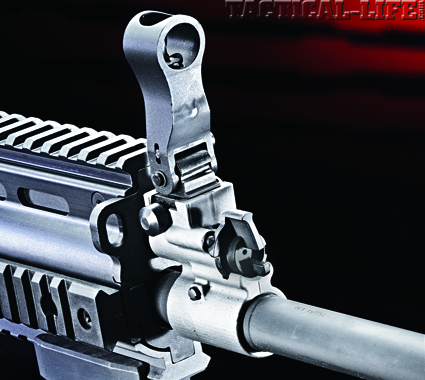 Final Notes
This is the first such rifle that has truly met all of my requirements. Only extended use would tell if it would do so over time, but for the limited time it was in my hands, it proved flawless. It ate up everything thrown at it yet produced excellent accuracy with the correct ammunition. It is light and has all the ergonomic features of the typical AR-style rifle. Although some nice glass was added for this test, truth is you could go to work with this gun right out of the box. Just add your favorite sling and buy a couple extra magazines. If I have an issue that is it, there is just one magazine. But, barring that the SCAR 17S is really just about perfect as a DMR or even a patrol rifle. If you can find one and can afford it you may want to grab it, you will not be disappointed.