MOST precision tactical rifles are in .308 caliber, but at the ranges typical of law enforcement SWAT engagements, a .308 is almost overkill, considering that the marksman is typically striving for a “head shot” at a distance that generally doesn’t exceed 100 yards and FBI statistics show that the average SWAT marksman engagement takes place at 51 yards. Thus, a .223 caliber rifle should be more than adequate given the relatively short engagement ranges. The argument can be made that the .223 isn’t as effective at longer ranges, but with the right ammunition, a rifleman with a .223 can accurately engage targets at surprisingly long distances using the right ammo. 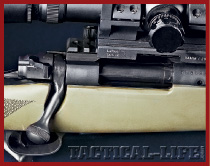 Gun Details
There are a number of precision tactical rifles available in .223 and FNH USA’s latest offering is one of the best. The rifle is designated “Tactical Sport Rifle XP.” We should note that TSR XP rifles are available not only in .223, but in .308, .300 WSM and 7.62x39mm.

Whatever it is called, FNH-USA’s latest offering is basically the tried and true Winchester Model 70, which has

Ejection is accomplished via a fixed blade ejector that allows the shooter to vary the ejection force, an important feature for precision tactical marksmen. Pulling the bolt vigorously to the rear tosses the spent case well clear of the rifle, while gently pulling it back allows the spent casing to either stay in the receiver or fall into the shooters hand, an important capability when conducting operations where leaving spent brass behind is not desirable.

The TSR XP USA in .223 came with what appears to be a Hogue OD green polymer stock, pillar bedded with the fluted barrel fully-free floated along its entire length. Pillar bedding is a method of stock bedding where steel or aluminum “pillars” of the precise length to ensure an exact fit are molded or inserted into the stock. The metal “pillars” ensure an exact fit between the receiver and floorplate, and the action is bedded to the pillars, not the stock, enhancing accuracy. The TSR XP’s steel floorplate is hinged to facilitate an immediate “ammo dump” should the need arise. The TSR XP can also be fed single rounds by just dropping the cartridge into the receiver and closing the bolt, an important feature for precision tactical marksmen. The selector has three positions; forward is “fire,” middle blocks the striker while allowing the bolt to be manipulated, and rear is “safe,” that locks up everything.

The forend is the classic semi-beavertail pattern that facilitates control with a thick rubber buttpad to absorb felt recoil. With the .223 cartridge’s light recoil, this isn’t really necessary, although the recoil pad has a “tacky” feel that enhances control by keeping the butt in place against the shooter’s shoulder. Also included was a Mil-Std-1913 rail for mounting a scope on the receiver. There are three sling swivel studs, with the forward one clearly intended for use with a bipod, although we opted to test fire our rifle off a bench rest.

The barrel is fluted along approximately half its length, which adds stiffness and helps dissipate heat under sustained fire conditions, although when barrels get hot, accuracy suffers. Free floating the barrel accomplishes a number of benefits. First, any time a bullet is fired, harmonic vibrations occur in the barrel. Free floating the barrel ensures that those vibrations do not affect accuracy because the barrel doesn’t touch the stock. Another benefit of free floating has to do with that old devil, heat. If the barrel isn’t free floated, as it is heated the barrel will expand, pressing against the stock, which affects zero, thus changing the point of aim. This is less critical in law enforcement situations where a single-shot to defeat a threat is the norm, but in the military, multiple shots are not only possible but more then likely. The bottom line is that any precision tactical rifle has to be built so that the components are as consistent in their relationship to each other as possible, regardless of the tactical situation.

The TSR XP trigger has zero creep or overtravel and breaks like the proverbial “glass rod” at exactly four pounds on our test rifle. FNH USA’s claims that the TSR’s trigger has out of the box performance on a par with many custom triggers initially aroused our skepticism, but after testing the TSR our skepticism evaporated. TSR XP specs state that triggers are set to a nominal pull weight of 3.5 to five pounds.  “Out of the box” production triggers like that of the TSR XP are possible for a number of reasons. Most significant is improved manufacturing processes. Components can now be manufactured to much closer tolerances using computer numerical controlled (CNC) machinery. Because of this, the internal components of the TSR XP trigger have surface finishes that approach mirror smoothness and tolerances on a par with many custom triggers.

Optics
We used a LaRue Tactical Mil-Std-1913 scope base to mount our Leupold Mark 4 6.5-20x50mm scope. The TSR XP’s standard Mil-Std-1913 rail mount is too short to accept all of the modern accessories such as the AN/PVS-22 Universal Night Sight that mounts ahead of the day scope, so we also obtained one of LaRue Tactical’s Sniper Total Optical Mounting Package (STOMP) scope mounts that clamps to any Mil-Std-1913 rail and encloses the scope in a metal cage, protecting it from physical damage while allowing full access to the windage and elevation knobs. The LaRue mount also has a detachable cantilever arm on to that allows the shooter to mount an AN/PVS-22 night vision optic ahead of his day optic. There is a section of Mil-Std-1913 rail on top of the cantilever arm to allow other accessories, such as lasers to be mounted. For the precision marksman whose rifle does not have a “long” Mil-Std-1913 rail to allow mounting an AN/PVS-22, the LaRue STOMP mount is essential, allowing the night vision sight to be mounted with no gunsmithing.

The scope and night vision capabilities are essential components of the overall system, but there are several other elements that are necessary. Although most precision tactical marksmen are trained to use Mil-Std-Dots, several active duty Army individuals have told us that in operational conditions, they use laser rangefinders because they are just more accurate and faster on target. The latest laser rangefinders are more accurate and dependable than earlier versions. Moreover, laser rangefinders like Leupold’s RXB-IV, 1500-yard rangefinder do much more than just indicate range. They integrate the rangefinding capabilities of 9x32mm binoculars, eliminating the need for separate binocs and rangefinder.

The proof of any precision tactical rifle is in its shooting, and the FNH TSR XP is one of the most accurate “out of the box” rifles we have ever tested. Our TSR XP USA .223 was “box stock” and delivered sub half MOA groups right from the box. We can only imagine how this rifle’s accuracy will improve once it gets broken in. If all TSR XP .223 USA rifles are as accurate as ours, it is an absolute steal.