by Robert A. Sadowski
in Guns, Handguns
0

The .40-caliber FNS-40 has excellent ergonomics, with a grip angle that makes it a natural pointer and plenty of grip texturing to provide an extra level of control.

FN of Herstal, Belgium, has been in the business of building military and law enforcement weaponry since the late 19th century. The relationship it had with John Moses Browning is a testament to the quality of the company’s products as well as its commitment to building dependable, innovative weapons.

Through the 1920s, FN and John Browning designed and manufactured what were at the time unique and innovative pistols, machine guns and shotguns. The last pistol design the two worked on was the Browning Hi-Power, which to this day is regarded as a benchmark in pistol design. Many contemporary pistol manufacturers use a similar operating system and employ the same high-capacity magazine feature of the Hi-Power. Those of you who served under Uncle Sam may be familiar with the M249 Squad Automatic Weapon (SAW) and the M240 General Purpose Machine Gun, two weapons Uncle Sam purchased from FN. In the early 1980s, FN opened a factory in Columbia, South Carolina. This puts the FNS-40 in good company, but it also raises the expectations for its performance, especially for a striker-fired, polymer-framed pistol.

FN introduced the new FNS pistol—the FNS-9 in 9mm and the FNS-40 in .40—to law enforcement in 2011. One of the first agencies to adopt the new FNS pistol was the Baltimore County Police Department. This agency chose the FNS-40 Longslide model as its duty firearm to be carried by on-duty officers. FNH USA delivered some 1,900 FNS pistols that were built in Columbia, South Carolina. 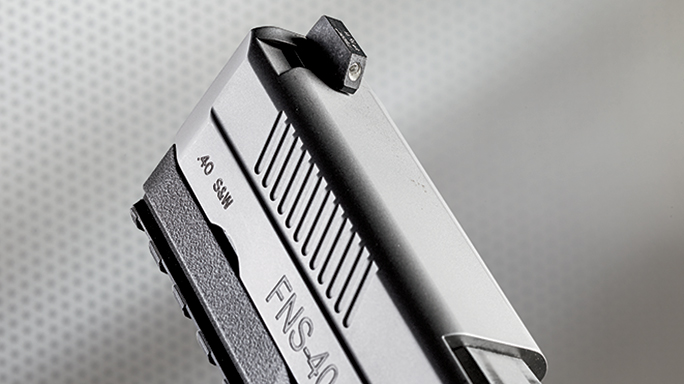 No matter how jaded I am about striker-fired, polymer-framed pistols, when I held the FNS-40 in hand it felt good. The grip was perfect for my average-sized hand. The toothy texture on the side panels and interchangeable backstrap felt right, with just enough gripping texture without feeling abrasive. The front grip strap has fine ridges that also help with grip. It comes with one flat and one arched backstrap, and either is easy to swap out depending on your hand size or shooting preference.

The FNS-40 pointed naturally and the three-dot tritium night sights aligned when I raised my arm to aim the piece. Fixed three-dot or fixed three-dot night sights are the pistol’s sighting options. The sights are dovetailed into the slide, which I like since either sight can be tapped left or right a bit to fine-tune them. Out of the box the FNS-40 shot to the left, which was caused by me pushing the trigger to the left while I pressed rearward on it. I like to spend more trigger time with pistols to see if it is me or the gun; usually it is me.

The slide and the barrel are both constructed from stainless steel. The barrel is hammer forged. The recoil system uses a solid steel recoil rod. The surface area of the slide sides are serrated both front and rear, providing good traction to rack the slide rearward. The external extractor also acts as a loaded-chamber indicator by slightly protruding and showing a red mark that shows the user that a round is in chamber. It can be felt and seen. The ejection port is large to cough out those .40-caliber cases. The rear of the slide is sloped and smooth.

The polymer frame has a small beavertail that worked well for my hand size. I’ll bet even meaty-fisted users will not have any issues with the slide as it recoils. The sides of the grips were flat with just a little sculpted relief near the back edge of the magazine release. Again, here’s where the ergonomics come into play. The manual safety levers, slide stop levers and magazine-release buttons are all fully ambidextrous. They are also subtle, meaning compact and small, yet very useable. The slide stop has a ridge on either side of it, making it snag-free. It fell right under the pad of my thumb for either hand. I could operate the thumb safety, which is shaped like a tiny, ridged wedge, with a swipe from the side of my thumb with either hand. Swipe the safety up to lock the trigger (but not the slide), or swipe down to reveal a red dot indicating the weapon is ready to fire. The thumb safety seemed to provide the right amount of resistance.

The magazine release is large and shaped like a teardrop. I had no issues releasing the magazine using the thumb of either shooting hand. The magazine release is large, almost like a magazine release on a competition gun. I like this since the size of the release button works well with gloved hands. As mentioned, the backstraps are interchangeable. I used the arched one for testing. Both backstraps include a lanyard loop that is not intrusive. To swap out backstraps insert a 1/16-inch punch, or the end of a small paper clip, into the hole in the backstrap and gently push inward to release the backstrap retainer. While maintaining pressure with the tool, slide the backstrap down toward the butt and mag well and off the grip. Install the backstrap by sliding in the rails until it snaps into place.  The magazine well is a black, open-mouth design that easily disgorged a full or empty magazine. It is flared and funnels a magazine home. Ramp up time for reloads was nil. I could keep my eyes on the cardboard target and reload without looking down at the pistol.

The dust cover has a real Mil-Std-1913 accessory rail for attaching a tactical light or laser. Embedded in the dust cover are the serial number and a scanable QR-style code.

The triggerguard was large. I fired the pistol with gloves and found no hang-ups. It is rounded at the front with a textured finish for those shooters who grab on to it. The surface of the trigger is wide and smooth and slightly arched in the center. With the pad of my trigger finger on the trigger, I could control groups downrange. The articulated trigger requires that the bottom portion of the trigger be pulled/pressed to fire the pistol. On average, the trigger pull was 5.75 pounds. The trigger was as consistent as it can be on a striker-fired weapon, meaning I like it. Trigger reset was short and acceptable; I could hear the distinct trigger reset sound after each shot.

The 10- or 14-round magazines sport a basepad that creates a slight shelf to keep your small finger steady on the frontstrap. Magazine bodies are metal and use a polymer follower. I found the magazine easy to load, even to capacity. There are no sharp magazine lips to cut or abrade your thumbs.

The FNS-40 was simple to field strip into five main components: magazine, frame, barrel, recoil spring and slide. Unload and remove the magazine, lock the slide in its rearward position with the slide stop and then rotate the takedown lever downward to the six o’clock position. While controlling the slide, release the slide stop and squeeze the trigger to release the striker. You can then pull the slide off the frame. Gently compress the recoil spring along the guide rod to release it from the barrel, then the barrel tips out of the slide. Once disassembled, the interior of the pistol was well machined, stamped and molded. That’s what I expected from FN. Those of us accustomed to polymer-framed, striker-fired pistols will find the guts of the FNS-40 familiar. The takedown lever is embedded into the side of the pistol’s frame and is also snag-free.

My test FNS-40 had a distinct preference for certain brands, namely Winchester White Box and Winchester PDX1. The FN tolerated the Federal Hydra-Shok ammo, but I needed to make sure I did good work with the trigger press and grip. This is not to say all FNS-40s will react the same way with the same ammo. I am splitting hairs since the difference between the groups with the Winchester ammo and the Federal ammo was about 1 inch. The FNS-40 is not a target pistol; it is designed for military and law enforcement applications, and it provided superb accuracy for a duty pistol.

At the other end of the spectrum are handloads. I tried some handloads that I have used for Glock Sport Shooting Foundation (GSSF) competition. I was amazed at the accuracy. At 25 yards and using my shooting bag as a rest, I was able to cluster 10 rounds into one ragged hole. I had to look twice at the target. Like I said, this pistol is a great example of why numerous types of factory ammo need to be run through a new gun, as well as how handloading can really optimize a weapon’s accuracy potential. There were no mishaps at all. The FNS-40 worked like a champ.

The FNS-40 should find appeal among law enforcement agencies and the concealed carry defense community. With this polymer-framed, striker-fired pistol’s balance, looks and performance, FN provides a quality product that’s rugged and reliable enough to get the job done.