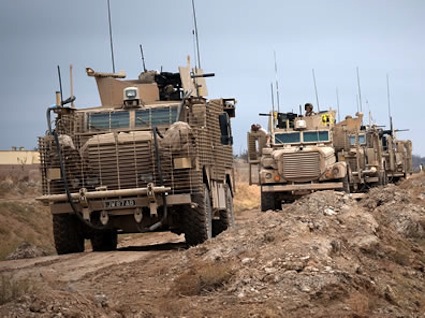 The Cougar is currently operated by the U.S. marine Corps, as well as the British Army. Both servcies are using several variants of the 4×4 and 6×6 vehicles. Photo: MOD

Force Protection Industries is strengthening the international industry team it is leading in bidding for the Canadian TAPV program. The company announced today the addition of Lockheed Martin Canada as the provider of integrated C4ISR systems for the program, and Elbit Systems, to provide the Dual Remote Weapon Station (DRWS). CAE was announced recently as Force Protection’s main Canadian partner with responsibility for providing the in-service support solution. Force Protection is offering the Canadian military variants of the Cougar wheeled armored vehicles to meet TAPV requirements. The Canadian Department of National Defence (DND) expects to award a contract to the final selected bidder by early 2012.

Force Protection Industries is one of several competitors shortlisted to compete for the supply of up to 600 wheeled combat vehicles expected to replace patrol and recce vehicles currently serving the Canadian land forces. Both Elbit Systems and Lockheed Martin Canada will rely on local manufacturing, further contributing to the team’s economic proposition. The DRWS, developed by Elbit Systems Land and C4I, will be produced in Nova Scotia Canada, creating high-tech, high-value jobs in that region. Elbit has already competed in the previous round of the TAPV program, as a member of an international team led by L3.

500 Chicago LEOs to be moved to high-crime areas from specialized units (video).

The Cougar is currently operated by the U.S. marine Corps, as well as the…