A combined security force detained a group of suspects in Khowst province, including a Hezb-i-Islami Gulbuddin militant group commander believed to be responsible for managing a homemade-bomb network and working with Haqqani terrorist network elements in the area.

Recent media reports profile the Hezb-i-Islami Gulbuddin as one of the three main militant groups in Afghanistan, officials said. The group keeps a low profile by cooperating with Taliban and Haqqani elements and deferring credit to those factions for attacks it conducts.

The combined force targeted compounds near Paru Kheyl village in the Sabari district, north of Khowst City, after intelligence indicated militant activity there. The force searched the compounds without incident and detained the suspects. One of the men surrendered and identified himself as the Hezb-i-Islami Gulbuddin commander. No shots were fired, and no one was injured.

Elsewhere, a combined force detained several militants in Kandahar province while pursuing a Taliban commander associated with homemade-bomb attacks in the province.

Acting on intelligence that indicated the Taliban commander’s presence, the force targeted a vehicle outside Mokhanjak village in the Meyan Nashin district and found about 1,300 pounds of urea nitrate, several cans of fuel and assorted documents.

Urea nitrate is a primary ingredient for homemade explosives and becomes a powerful explosive when mixed with fuel. The force destroyed the urea nitrate and fuel in place. No shots were fired, and no one was injured or killed.

In a separate operation, a combined force killed multiple militants and detained several suspected militants in Logar province while pursuing a Taliban commander responsible for numerous attacks in the area.

The force targeted a compound near Shah Mazar village in the Baraki Barak district after intelligence indicated militant activity there. The force received hostile fire and returned fire, killing the militants, then searched the compound, recovered pistols, hand grenades and ammunition, and detained several suspected militants. All recovered items were destroyed at a safe distance from buildings and other structures. No civilians were harmed during this operation.

Meanwhile, a combined force killed several militants in Nangarhar province while pursuing an al-Qaida operative known for a range of duties, including militant training. He also is believed to be responsible for several attacks in the area.

The force targeted a compound near Baghdarreh village, south of Jalalabad City, after intelligence indicated militant activity there. The force received hostile fire and returned fire, killing the militants. The force recovered a machine gun and assault rifles. All weapons were destroyed at a safe distance from the compound.

In a separate operation, a combined force killed a militant and detained a suspected militant while pursuing a Taliban commander responsible for supplying foreign fighters and homemade bombs to other militant elements in the area. He is known to be in charge of as many as 40 Taliban fighters.

The force targeted the building near Stazkhan village in Achin district after intelligence indicated militant activity there. The joint force received hostile fire and returned fire, killing the militant. The force then searched the building, detained a suspected militant and recovered bomb materials, rocket-propelled grenades, hand grenades and chest racks fully loaded with ammunition. No civilians were harmed during this operation. 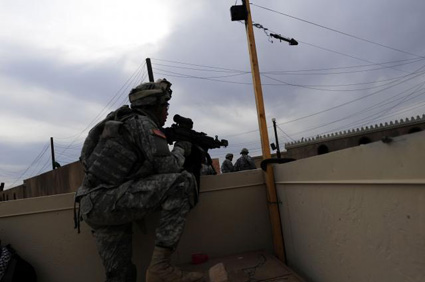