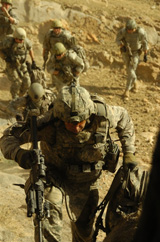 Two Black Hawk helicopters from 82nd Combat Aviation Brigade inserted and extracted troops along the harsh terrain. The force used two-wheel landings, which allowed the troops to dismount and execute their mission.

“Insertion of troops [by helicopter] allows ground forces freedom of maneuver in locations where harsh terrain is a factor,” said Army Capt. Joe Daigle, commander of Company C, 2nd Aviation Regiment, 82nd Combat Aviation Brigade, who served as a pilot during the operation. “We take these teams to their mission site and pull them out safely, minimizing their time on the ground.”

Army Capt. Matthew Bebo, the battalion’s liaison officer, said the operation made an impact. “The disruption caused by this operation will have a great effect in Kandahar province,” he said.

One insurgent fled the scene. The resident apprehended another insurgent and delivered the suspect to the Alingar police, who transferred him to the province’s Afghan National Police headquarters for questioning.

The incident marked the third time in five days that villagers in Nuristan and Laghman provinces have prevented insurgents from attacking their villages, officials said.