0
SHARES
1
VIEWS
Share on FacebookShare on Twitter
FORT BENNING, Ga. — The Patton Round House sits on Hook Range some 20 years ago. The rapidly deteriorating building was restored to its design and will be rededicated Friday.

A relic of an historic era on post is set to be revived after persistent determination by a proud unit and generous
contributions from those who understand the nostalgia of the old building.

The U.S. Army Marksmanship Unit will rededicate the USAMU Round House, commonly called the “Patton Round House” in association with Gen.

George Patton’s time at Ft. Benning, at a ceremony Friday.

Originally built in 1938 on the unit’s Hook Range, its purposewas to serve as a hunting lodge but soon became the Officers Club annex.The building of the Round House coincided with the designation of Hook
Range as the post’s skeet range. 2nd. Lt. Paul Tibbets attracted attention for his innovative method of using skeet training to teach aerial gunners to lead their targets at the range. Tibbets later attained the rank of brigadier general and piloted the Enola Gay on Aug. 6, 1945, dropping the first atomic bomb on the Japanese city of Hiroshima.

It is known that Generals Patton, Tibbets, Omar Bradley and Courtney Hodges all spent a significant amount of time on the rangeduring the World War II era, and it is presumed that they often visited the adjacent Round House. It has been said that the generals would place small wagers on shooting matches and then find refuge in the Round House afterwards. John Wayne used the building as a retreat while filming “The Green Berets” on post in 1967 and one scene of the film was shot on location at Hook Range. 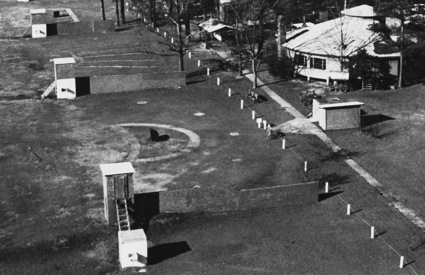 FORT BENNING, Ga. — An overhead view of the skeet fields on Hook Range from the 1970s with the Patton Round House off to the side. The range has hosted numerous national matches and those in attendance would frequent the Round House for a game of pool or to sit by a fire and relax in between shooting.

In 1956 President Dwight D. Eisenhower formed the USAMU to raise the overall marksmanship proficiency of the Army. By 1960, Hook Range and the Round House were home to the USAMU Shotgun team and it hosted
the Olympic trials for marksmanship. Since that time, seven Olympic medalists, several World Champions and a slew of national champions have walked through the door of the Round House to shoot a game of pool or
sit by the fireplace to relax after a match.

The wooden landmark has been beset by age and erosion the last several years and word got around that it was slated for demolition.

Several former and current members of the USAMU made it their mission to ensure that the World War II artifact would survive and be better than before.

In a letter dated 1999, Tibbetts wrote a letter describing the Round House as not just an old World War II building, but as “an icon to be preserved” because it “projects a strong nostalgic memory and image”
for those who spent time there during the World War II era.

The building survived the chopping block thanks to the charity of a friend of the USAMU family. Prosser Mellon and the Mellon Foundation stepped in and made a significant monetary contribution to the Army with the intent of restoring the Round House.

Mellon is friends with Staff Sgt. Josh Richmond, a shotgun shooter for the USAMU. The two were introduced by a mutual friend, John Hamilton, Mellon’s son-in-law, and they immediately struck up a rapport. Mellon was an invited guest of the unit one day a few years ago and after touring the custom firearms shop and the pistol range, he descended upon Hook Range to do some skeet shooting.

“Walking up to the skeet line he saw this building, unmaintained, and asked about it since it didn’t really fit into the landscape with everything else so clean and in-shape,” Richmond recalled. “He asked me the story behind this building, so I briefly told its history, about all of the famous and influential generals who used it, and went back to shooting.

“Prior to him leaving for the day, his wife Sandy Mellon came over and said that she needed to get some information on who to get in touch with-Prosser wants to re-do that house. Basically it started there
over night and we are where we are today.”

After several months of construction, a few words, a ribbon cutting and “first shot” ceremony will reopen the building Friday morning. From that point on, the Patton Round House will once again be ready to host social gatherings, shotgun matches, and maybe even a few more of those “unofficial” officers meetings.