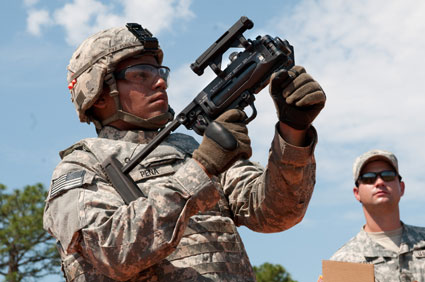 FORT BRAGG, N.C.– The barrels were hot in the Army’s charter fielding of the new M-320 grenade launcher at Range 23 here, as paratroopers of the 82nd Airborne Division fired the weapons for the first time.

Staff Sgt. Robert Eaton, a squad leader with A Company, 2nd Battalion, 504th Parachute Infantry Regiment, participated in the 2003 invasion of Iraq and was involved with clearing virtually every village and town from the Kuwaiti Border to Baghdad. He used the Vietnam-era M-203 grenade launcher in combat and said he was impressed with its successor.

“I wanted to find out how quickly I could fire the M-320, get behind cover, reload, re-acquire a target at a different distance, and then engage,” said Eaton. “I fired three shots in just under 30 seconds,” he said, well pleased.

“In Iraq, I found the M-203 to be pretty accurate, but it was more of a weapon of intimidation,” said Eaton. “If you are getting shot at from a building, you put a round through two windows to the left. It might not kill him, but it’s definitely going to get him to put his head down. Now with the 320, you’d probably put the round within killing range, and a lot quicker,” he said.

“The principles are still the same as with the M-203. It’s just more accurate and faster to get your rounds on the target,” said Eaton.

For Bob Phung, Army civilian and project engineer for Product Management Individual Weapons in Picatinny, N.J., the training was the fruition of a journey that began in 2006 when his office received the product requirements from combat development at Fort Benning, Ga.

The result was a weapon that is more accurate at night than day, thanks to a laser rangefinder and infrared laser pointer; a weapon that is more versatile, with its ability to mount on an assault rifle or be fired as a standalone; and a weapon that is safer, due to its double-action trigger. A side-opening breach also allows quicker reloading and the use of larger rounds, said Phung.

“Even though the barrel is over three inches shorter, the shot group is tighter than on the M-203,” said Phung.

A trainer from Fort Benning’s 2nd Battalion, 29th Infantry Regiment, he and fellow trainer, Staff Sgt. Raymond Miller stressed to paratroopers that they use the weapon in the manner in which it was designed to be used.

“Many times, guys get new equipment, and they second-guess it,” said Foti. “But the engineers who developed this weapon have already removed the guesswork,” he said.

The day-and-night sight is a new take on an old piece of equipment that many Soldiers have found problematic in the past, said Miller. The original sight was bulky and prone to mechanical issues, he said.

“The new sight has been through full-fledged operational tests,” said Miller. “Its issues have been identified and resolved, and now it’s a good piece of kit.”

Both trainers have used the M-320’s predecessor in combat and see practical advantages to the new grenade launcher’s modularity.

“A Soldier doing cordon-and-search is going to be doing a lot of room clearing,” said Miller. “He can remove the M-320 so that he can lift his primary weapon quickly without all that weight.”

“And at the end of the day,” said Foti, “he can marry the weapons back up and use it in a defensive posture, taking really-good range sketches. That way, the squad leader, platoon sergeant and company commander understand that, if they have dead space out there, they have an M-320 that will fill that dead space with a guy that is accurate and proficient with it.” 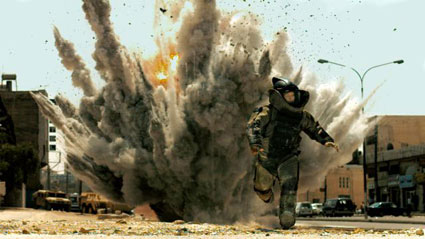 FORT BRAGG, N.C.-- The barrels were hot in the Army's charter fielding of the…