0
SHARES
532
VIEWS
Share on FacebookShare on Twitter
France’s Groupe d’Intervention de la Gendarmereie Nationale (GIGN) has been active since 1974, carrying out a wide variety of missions while utilizing an array of weaponry, such as the HK 5.56 rifle and Remington 870 shotgun.

France’s Groupe d’Intervention de la Gendarmerie Nationale (GIGN) is one of the oldest and best of the world’s anti-terrorist units. Activated in 1974 in response to the Munich Olympic massacre and a bloody prison siege in France, GIGN has achieved a reputation for excellence among the world’s anti-terrorist elite. France’s Gendarmerie Nationale is a militarized police force with various duties including providing MPs (Military Police), guards for nuclear installations, and other specialized tasks including the anti-terrorist missions. Unlike many military anti-terrorist units, members of GIGN have the powers of arrest. As a result, they may be deployed with military special operations units on missions such as rescuing hostages from pirates to arrest any pirates, and who are captured. Of course, since GIGN operators are fully trained, they can also assist in the rescue.

Unlike many anti-terrorist units, GIGN is not only used for anti-terrorist operations but also in arrest of dangerous criminals, countering barricaded suspects, quelling prison riots, VIP protection, and other high-risk police operations within France or former colonies. During the 35 years of GIGN’s existence it has taken part in over 1,000 operations and rescued more than five-hundred hostages.

For many years, the strength of GIGN was around 100, but over the last few years, their strength has been increased incrementally and by 2010 it is expected to reach 420. At least one reason for the increase in personnel is to grant the capability of deploying up to 200 operators in the event of a massive hostage incident similar to that at Beslan in Russia. 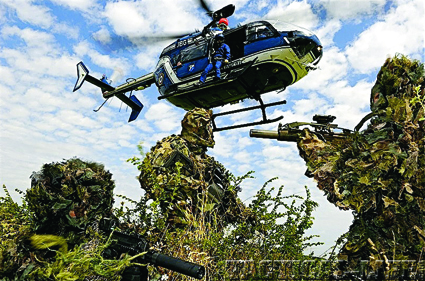 With far-reaching capabilities, GIGN operators can be rapidly deployed for virtually any tactical scenario.

France’s Groupe d’Intervention de la Gendarmereie Nationale (GIGN) has been active since 1974, carrying out a wide variety of missions while utilizing an array of
weaponry, such as the HK 5.56 rifle and Remington 870 shotgun.

At all times, one troop is ready for immediate deployment within 30 minutes to an incident site while a second troop is ready to follow up within hours. For a major incident, operators from the Protection Unit or Observation Unit can augment the Intervention Units. Note also that most of the support personnel are drawn from trained operators and could be deployed if needed.

Training
Selection for GIGN is quite rigorous including preliminary physical, shooting, swimming, intelligence, and psychological tests. All candidates have already served in the Gendarmerie Nationale and many have served in EPIGN (Escadron Parachutiste d’Intervention de la Gendarmerie Nationale), an elite parachute qualified reaction unit.  The maximum age for attempting selection is 32. Selection includes various “sickeners” to determine if candidates have a fear or heights, tight spaces, water, etc. — a bungee jump from a bridge is often included. Part of the swimming test is the ability to swim with hands and feet bound. Candidates must also compete against each other of comparable size and martial arts training in a hand-to-hand combat trial. The selection committee is most interested in determining whether the candidate will continue to fight and not give up. Mixed with the physical tests are tests of reasoning, observation, and memorization. As with many selection courses, a run with a loaded pack is incorporated.  Generally, about 10% make it through the selection phase.

Once they have made it through selection, new operators will receive two months of general training and then six months of more specific training to join one of GIGN’s units. Once an operator joins his unit, he completes his probationary period and becomes a full-fledged member of GIGN.

Among the training given to GIGN operators is intensive practical shooting. All GIGN operators qualify with the pistol, submachinegun, shotgun, and rifle. A very large percentage also qualify as snipers, though some specialist snipers are trained for long range shooting with .338 Lapua or .50 BMG rifles. Operators qualify as parachutists with some specializing in HALO (High Altitude Low Opening) and HAHO (High Altitude High Opening) as well as helicopter insertions and extractions.

GIGN operators also receive substantial scuba training. Some GIGN operators specialize in maritime operations and receive more intensive scuba and boat training, but all are basic scuba qualified. Years ago, to teach operators to remain calm under water, GIGN swimmers would lie on the bed of the Seine while large barges passed only a few feet over their heads. They also learned to shoot and eliminate targets on board a ship or dock as soon as they broke water.

They also receive intensive close combat training, which has recently included krav maga among other disciplines. GIGN personnel receive basic demolition training including the use of explosive entry as well as recognition of booby traps. Specialists receive more intensive explosives training. Operators are trained in rappelling, free climbing, mountaineering, skiing, desert operations, and high speed driving, the latter at LaMans. An array of infiltration and exfiltration skills are taught to GIGN operators that allow them to reach a target site, carry out surveillance, and launch a rescue or raid.

More intellectual training includes psychological profiling of terrorists and interrogation techniques as well as investigative techniques. All members of the unit learn basic negotiating skills, though there are specialist negotiators who receive more advanced training. Operators also learn languages and foreign cultures to allow them to work anywhere they are likely to be needed, especially in the former French colonies.

Members of GIGN’s Intervention Unit train extensively in aircraft assault, ship assault, and building assault. They also train extensively at French prisons to prepare for operations during prison riots or when hostages are taken. GIGN dog handlers work closely with other operators and the dogs are trained to aid in tubular assaults (i.e. aircraft) by being inserted to take down anyone with a gun just before the assault teams enter. GIGN dogs are trained to parachute or rappel with their handlers. GIGN personnel are considered so good on aircraft assaults that the International Civil Aviation Organization uses them to teach units in various countries how to take down an aircraft.

Missions
Among the many operations successfully carried out by GIGN are a few that are especially noteworthy. In 1976, GIGN snipers took out all but one of the terrorists who had seized a school bus carrying 30 French children in Djibouti. An assault team eliminated the final terrorist and rescued all but one of the children.

In 1979, members of GIGN aided the Saudis in retaking the Grand Mosque in Mecca, which had been seized by terrorists. And in 1994, GIGN operators assaulted an Air France plane at Marseilles rescuing 229 passengers and preventing the plane being used as a flying bomb against Paris.

Most recently, in 2008, members of GIGN helped the Commando Marine free French hostages from Somali pirates. GIGN has been deployed on numerous other missions inside and outside of France, some of which remain classified to this day.

Weapons & Gear
Traditionally, GIGN has offered its operators some leeway in weapons choice and, as a result, they have a number of weapons in their arsenal. Unlike most anti-terrorist units, GIGN has used a revolver as the primary handgun for much of its existence. Operators were issued two MR73 revolvers — a 3-inch and a 5.25-inch barreled. This French revolver is arguably one of the best revolvers ever made, being both accurate and durable. It is not at all unheard of for MR73s to stand up to 250,000 rounds or more of full-power .357 Mag loads. By the way, 250,000 rounds is five or six year’s worth for a typical GIGN operator. Other MR73s have been used by GIGN, including ones with 8-inch barrels, a scope, and a bipod to serve as urban sniping weapons. Smith & Wesson revolvers have been used by GIGN also, including Model 29s and Performance Center Model 586s.

Among automatic pistols used by GIGN are the Glock 17, 19, and 26, the latter for undercover or close protection assignments. Others include the FN Five-seveN and Sig Sauer P226 with an Insight Tech-Gear illuminator, the SIG P2022 and GIAT (French Beretta 92).

The standard SMGs for GIGN are the HK MP5A5, MP5SD3, MP5SD6, and MP5K-PDW. The FN P90 is used for its ability to punch through body armor. The Heckler & Koch UMP, which is the standard weapon for the Gendarmerie, is available for the unit as well.

The primary assault rifles used by GIGN are the SIG 550, 551, and 552. The 550 and 551 are equipped with Hensoldt 6×42 BL optical sights. The standard French military rifle, the FAMAS, is available, too. GIGN also uses an array of shotguns. The Remington 870 has been widely used, but the Franchi SPAS-12 and Benelli Super 90 M3T are currently used as well. The French FR-F1 and FR-F2 sniping rifles have been used by GIGN, but other sniping rifles see their share of use. Among those in the arsenal are the Tikka T3 Tactical, Accuracy International AW, AWS, and AWSM; Barrett M82 and M95, and PGM Ultima Ratio Hecate II.

Now in its fourth decade, France’s GIGN has established itself as one of the world’s premier anti-terrorist units. Throughout its history, GIGN has seen more action than most other units and has a notable record of success in rescuing hostages. Other units around the world value GIGN’s expertise and train with the French whenever possible. The French word “élan” means to perform with style. GIGN combines utter professionalism and rigorous training with élan to create a truly elite unit.