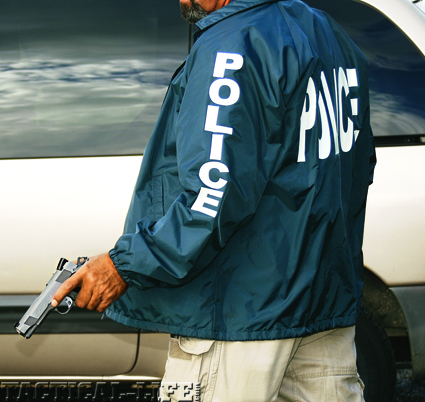 This raid jacket is clearly identifiable from most angles, but may not be part of an officer’s attire in every situation.

Three actual cases show the dangers of mistaken identity shooting when unidentifiable officers draw guns in public. Here are some ways to mitigate the danger.

Case One: NYPD Sergeant  Christopher Newsom leads a plainclothes squad that interdicts street scam artists. One such suspect flees from arrest on foot with the sergeant in pursuit. Outside a hotel in crowded Times Square, the suspect suddenly turns on the officer and opens fire on him with a .45 caliber MAC-10-style weapon. The sergeant instantly returns fire one-handed with his duty sidearm, firing four shots and attaining four hits, and it’s over. The violent criminal is down and dying, the danger he presented to the public has been shortstopped, and the brave plainclothesman has performed his duty in an exemplary fashion. Unfortunately, plainclothes encounters don’t always end that well.

In Case Two a few years ago in the same city, a plainclothes officer working a Transit detail disarmed a criminal in a subway station and was mistaken for an armed and dangerous suspect by an off-duty city cop riding the subway. The latter opened fire, seriously wounding the on-duty plainclothesman. Brother officers returned fire on the unidentifiable off-duty cop, in turn. It was a double “friendly fire” tragedy.

Case Three occurred in May of 2009, when off-duty NYPD officer Omar Edwards was shot and killed by on-duty officer Andrew Dunton. Dunton was cleared by a grand jury because evidence indicated the slain officer had his S&W out while chasing a suspect, did not identify himself when ordered by the on-duty cops to drop the weapon, and instead turned toward them with the gun in his hand just before he was shot.

Responsibility On Unidentified
This sort of mistaken identity tragedy has occurred all over the country over the years, and standard protocols have evolved to prevent it. It has long been understood that the unidentifiable officer is expected to submit to the commands of the identifiable officer and drop his weapon when ordered to do so. 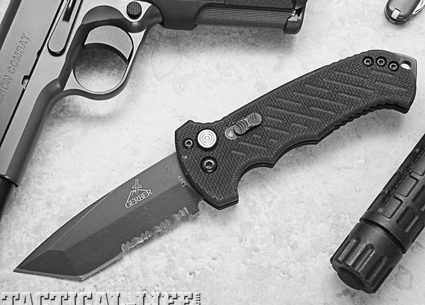 Gerber raises its own bar by lightening the load of its top-selling, clip-folding automatic...