0
SHARES
15
VIEWS
Share on FacebookShare on Twitter
Combat troops face many dangers on the battlefield, but few are more frightening than a well-aimed shot, fired without warning, seemingly out of nowhere, that takes out a comrade. In the past 25 years, fear of snipers has increased exponentially with the development of reliable .50-caliber rifles. The standard .50 BMG round has been in military service since the mid-1920s, fired primarily in machine guns. With more than 12,000 foot-pounds of muzzle energy, about five times the power of a 7.62 NATO cartridge, the .50 is not only a lethal anti-personnel round but also fully capable of penetrating and destroying lightly armored structures, vehicles and equipment. A military ball projectile weighs in at about 665 grains, nearly seven times heavier than a 7.62 bullet, and flies faster (2,900 fps vs. 2,500 fps for the 7.62) and farther (2,000 yd. vs. the 7.62’s 1,500 yd. listed max effective range). In fact, the record for a successful .50-caliber aimed shot is 2,657 yards (1.51 miles), fired by the aptly named Canadian Master Corporal Rob Furlong, who used a McMillan TAC-50 bolt-action rifle during Operation Anaconda in Afghanistan in 2002.

Today, more than a dozen nations produce more than 30 highly accurate, extreme range rifles using .50-caliber or even larger special anti-materiel rounds. Space constraints prevent covering all of them, so this article will highlight some of the most widely used rifles as well as several interesting designs. 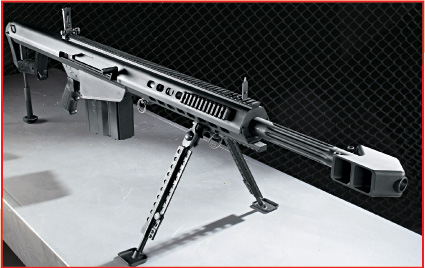 Barrett MODEL 82A1/M107
Barrett produces some of the most widely used .50-caliber firearms in the world. The design is also groundbreaking. Ronnie Barrett, a professional photographer with no technical background, created a relatively portable and compact semi-automatic rifle capable of handling the BMG round’s formidable recoil. Most designers believed only a large, heavy bolt-action could manage .50-cal power, but Barrett proved them wrong, producing a very accurate, reliable semi-auto receiver with a floating barrel and large muzzle brake to absorb the round’s massive kick. Magazine capacity is 10 rounds. Barrett and his team have steadily added capabilities to the rifle, as well as other models for law enforcement and civilian use. The model M82, named for the year it was developed, and later variants, quickly became standard issue for the armed forces of the United States and more than 20 other nations. The U.S. Army designated the weapon as its Long Range Sniper Rifle, Caliber .50, M107. The Marines currently use the M82A3, almost identical to the M107. The Navy, Air Force and Coast Guard also use Barretts, and several law-enforcement agencies also have adopted the rifle for special operations.

McMillan TAC-50
Phoenix-based McMillan holds the distinction for producing the .50-caliber rifle with the longest-range kill ever recorded—2,430 meters. For the aforementioned shot,  Rob Furlong used a C15, Canada’s designation for the TAC-50. The McMillan is a bolt-action rifle fed from a five-round detachable box magazine with a free-floating, heavy barrel fitted with a muzzle brake for recoil reduction. The stock is fiberglass with a pistol grip and an integral bipod. The saddle cheek-piece is fully adjustable, and the stock can accommodate up to four extensions that add 1.5 inches in length. The single-stage trigger is adjustable, with a recommended pull of 3.5 pounds. The rifle contains no sights and uses either a Nightforce NXS 8-32 x 56 mm Mil Dot or a Leupold 16 Mil Dot scope. McMillan offers several camouflage finishes, including black, olive, gray, tan and dark earth. In addition to Canada, prominent McMillan users include armed forces in France and Turkey, and U.S. Navy SEALs. 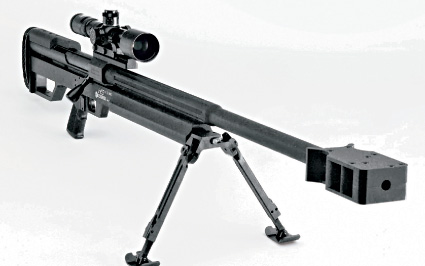 Steyr HS .50
Manufactured by Austria’s Steyr-Mannlicher, the HS .50 is a bolt-action, single-shot rifle introduced in 2004. It weighs in at 28.5 pounds with a length overall of 54 inches. The trigger is two-stage, factory adjusted to 4 pounds. Barrel length is 33 inches with a large muzzle brake. An integral bipod folds under the barrel. A Mil Std. 1913 Picatinny rail accommodates a variety of scopes. The stock’s length is adjustable, as is the cheek piece. Steyr intends the rifle for commercial sales and has produced a version in .460 Steyr caliber for sale in states that have banned the sale of .50-caliber firearms to civilians. Of interest, Steyr also manufactures the IWS 2000, derived from a mid-1980s design that fires a 15.2 mm (.60-caliber) armor-piercing projectile with an eye-watering 4,750 fps muzzle velocity.

DSR 50
Germany’s DSR Precision recently developed the DSR 50 by enlarging the design for its DSR-1 sniper rifle in 7.62 mm NATO and other rifle calibers, introduced in 2000. The DSR 50 is a bolt-action rifle but departs from routine by incorporating a bullpup configuration, placing the receiver and three-round detachable box magazine behind the trigger group. This enables the rifle to use a relatively long 31-inch free-floating barrel in a smaller envelope. The DSR 50 is just over 53 inches in length overall. The barrel can be detached from the receiver with three screws. In addition, its bullpup design balances the weapon, enabling installation of a large “blast compensator,” a device combining the functions of a silencer and a muzzle brake.

The rifle is among the lightest .50-caliber firearms, with an empty weight of less than 23 pounds. The fully adjustable stock includes a hydraulic recoil absorption system and a monopod for added stability. A top-mounted integral bipod is mounted at the end of the vented aluminum hand guard surrounding the fluted barrel. Another odd aspect of the DSR is a storage compartment for a spare magazine forward of the pistol grip and trigger guard like a conventional mag well. 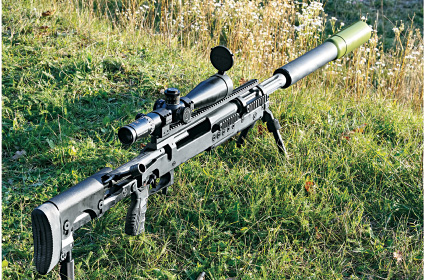 KBP OSV-96
Russia has a long heritage of sniper rifle production and has developed and tested several .50-caliber weapons. The most representative and widely used recent model is the OSV-96, a product of the Tula Instrument Design Bureau (KBP) that improves on the earlier V-94. OSV-96 is a semi-auto rifle with a five-round magazine. Its bolt locks into the barrel extension, a feature that permits installation of a folding hinge between the barrel and receiver. This is useful because of the rifle’s unusual length overall, nearly 69 inches. The barrel, more than 39 inches long, is free-floating and incorporates a muzzle brake and flash suppressor. The rifle is available for export and has been adopted by several Russian law enforcement agencies. Of interest, the Russian .50 x 108mm round is 9 mm longer than the BMG .50-caliber cartridge and not interchangeable.  Also, the OSV-96’s accuracy and performance may be somewhat less than other .50-caliber rifles because match-grade Russian ammunition is not generally available.

AMSD OM 50 Nemesis
Switzerland’s AMSD (Advanced Military Systems Design) produced the Nemesis in 2001, using a design by retired U.S. Marine Lt. Col. James B. Owens and company founder Chris L. Movigliatti, the “O” and “M” in the weapon’s designation. The original rifle, the Mk I, is a bolt-action single-shot version. The later Marks II and III are repeaters with five-round mags. The Nemesis uses a unique modular design, with interchangeable components fastened with screws. The rifle contains a recoil lug between the pistol grip and receiver sections that absorbs recoil forces and offloads any stress from fasteners. The OM 50 also features a system of six interchangeable barrels, switched in about two minutes, with lengths ranging from 15 to 33 inches. Longer barrels incorporate high-performance muzzle brakes as well as sound suppressors. The stock is fully adjustable and folds on the Mk II and Mk III versions. An integral Picatinny rails hold a scope sight, and a shooter can fire the short-barrel versions offhand although a front-mounted bipod and stock monopod stabilize the long-barrel models.

Zastava M93 Black Arrow
The M93 Black Arrow (Crna Strela) is a product of Zastava Arms of Kragujevac, Serbia. The rifle entered service in 1998 and immediately saw extensive use in Kosovo and later in the Macedonian insurgency. Aside from its use at home, the Black Arrow has been a popular regional export and limited numbers have been distributed to other countries, including the U.S. Production of variants that fire Russian 12.7 x 108mm and NATO BMG rounds clearly enhances global exportability. Unlike most large-caliber sniper rifles, the Black Arrow includes an 8 x 32 scope and can accommodate other optical sights. In addition, back-up iron sights with a folding front blade are included. The large rifle carries a 39.4-inch, free-floating fluted barrel with a muzzle brake that reduces felt recoil by 62 percent, a folding carrying handle and an adjustable bipod. The polymer adjustable stock contains two spring buffers. Effective range is comparable to many similar designs, and its price is less than other heavy rifles, making the rifle competitive, especially in the Third World.

Accuracy International AW50 and AS50
The British Arctic Warfare (AW) .50, manufactured by Accuracy International, Ltd., is another beefed-up derivative of a widely used sniper rifle design. Based on the AW, produced in several large rifle calibers, the AW50 is a bolt-action repeater with a five-round magazine. The stock contains a fully articulated cheek piece, an integral recoil dampener and a monopod. One model also incorporates a folding stock to facilitate portability and reduce length by nearly 10 inches. An under-barrel bipod is integral as well. In addition to the British Army, several other military forces use AW50s, including the Royal Australian Navy and the Australian Army, which adopted the folding stock version, German special forces, frogmen and scout units, the Irish Army Rangers, the Royal Thai Navy SEALs and the Portuguese Marine Corps. AI introduced the AS50, a semi-automatic .50-caliber sniper rifle, in 2005. The semi-auto rifle also contains a five-round detachable magazine.