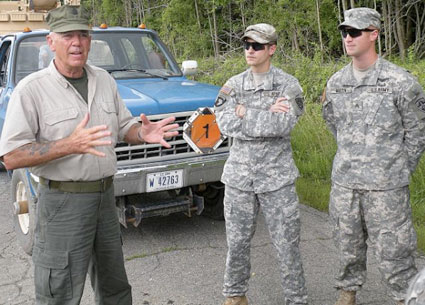 Ermey’s new show will follow a similar format to his previous History Channel show “Mail Call.” On that program, he reprised his gunnery sergeant role, answered viewer’s questions about military topics and exploded watermelons during his demonstrations.

“Lock ‘N Load” will focus on modern weapons. The show will feature the weapons Emery fired at the ATC including the Bradley and Stryker Mobile Gun System and the Mine Resistant Ambush Protected vehicle he drove around the road courses.

Taking breaks from production, Ermey passed out personalized coins to ATC staff, signed autographs and posed for pictures alongside anyone who asked him. He also swapped stories with several noncommissioned officers assigned to ATC and repeatedly expressed his gratitude for the work they perform on behalf of America’s men and women in uniform.

“Lock ‘N Load’s” first show will feature the rifle and airs July 31 at 9 p.m. Eastern Time. It has yet to be determined when the segments filmed at APG will be broadcasted on the show.