Fulton Armory has long been noted as a producer of high quality rifles, including every type of semi-auto rifle used by  the United States military in the 20th Century—M1 Garand, M1 Carbine, M14 (M1A) and AR-15 type—all have been produced by Fulton Armory. Fulton Amory has been producing its Titan series of .308 AR-type rifles for several years, but the most recent version redefines the series. The latest Fulton Armory Titan, like its predecessor and all other Fulton Armory products, is a true custom rifle built in the Fulton Armory facility in Savage, Maryland using only the best components available. There is an extensive list of options so the potential Titan buyer can tailor their rifle to their individual taste or mission profile. The Titan is available as an upper conversion in addition to being available as a complete rifle. Thus, any .308 owner with a compatible lower receiver such as DPMS, Remington, Bushmaster and others can add a Fulton Armory Titan match grade upper. 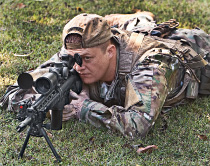 Probably the first question any potential FAR-308 Titan buyer will ask is, “What makes the Titan any different from any other .308 AR?” Good question and hopefully by the time we are finished, the answer will be abundantly clear.

Gun Details
First and foremost, Fulton Armory uses only the best components available, beginning with Fulton Armory’s own receivers. Barrels are Krieger’s Criterion with four grooves, 1-in-10-inch rifling and are available in 16-, 18.5-, 20- and 22-inch lengths. Our test rifle had the 18.5-inch chrome-lined chrome-moly variation. Barrels are also available in plain stainless or target grey. The matte finish reduces glint under tactical conditions and at the same time provides a finish that is aesthetically pleasing. The muzzle end of the barrel is fitted with a Smith Enterprises Vortex flash suppressor as standard with a JP Enterprises Bennie Cooley model tactical muzzle brake as an option. The compression fit steel gas block is a Fulton Armory design that includes the flip-up front sight.  The gas block is essentially part of the barrel; It cannot work loose like pinned gas blocks.