The US military is the best-equipped force in the world, bar none. Outfitted with the latest in military hardware and technology, a single soldier is far more lethal than his 20th century counterpart. The one problem remains, while fighting equipment has become deadlier and in some cases even more miniaturized, the 21st century combatant still has to deal with transporting all of their mission essential gear. Add their weapon, body armor and other personal gear and this millennium warrior is often transformed from a fine tuned operator to a pack mule.

While the elusive enemy sports a simple chest harness carrying a few magazines of AK-47 ammunition, our professional warriors are weighed down with heavy rucksacks, MOLLE (Modular Lightweight Load-carrying Equipment) pouches, armor plates, hydration systems and other forms of load bearing gear. It is not uncommon for the average soldier in combat to be carrying a load in excess of 80 pounds. The soldier must bear this load in a variety of climates, all the while attempting to negotiate terrain that would even stress out a mountain goat.

During World War II the US Army utilized mules to move heavy equipment and weapons in both the European and Pacific theaters. Nearly 60 years later, the FCS (Future Combat Systems), the Army’s primary organization for the modernization of the service, is re-introducing the mule back on to the 21st century battlefield. 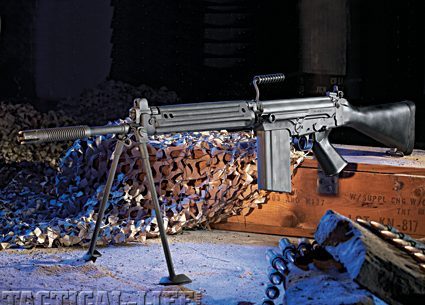 The US military is the best-equipped force in the world, bar none. Outfitted with…