by Anthony Gimmellie
in Guns, Rifles
0

Military and Law Enforcement snipers are constantly searching for increased performance and ballistics for their tactical rifles in order to gain the tactical advantage they need to solve today’s complex problems. 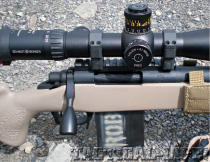 The majority of the tactical rifles in service today are chambered for the highly popular .308. If popularity was the ultimate key in deciding who wins or losses in a gun fight, then the .308 would be a hands down winner. Unfortunately, the ability to effectively hit your intended target fast, the furthest, and with the most accuracy is what will allow you to fight another day.

With the growing popularity of 6mm and 6.5mm bullets with high ballistic coefficients, today’s shooters are taking advantage of what ammunition companies are producing to enhance their shooting. Hornady’s new 6.5 Creedmoor Match round has proven to be an effective tactical cartridge with superior ballistic qualities that easily surpasses the .308.