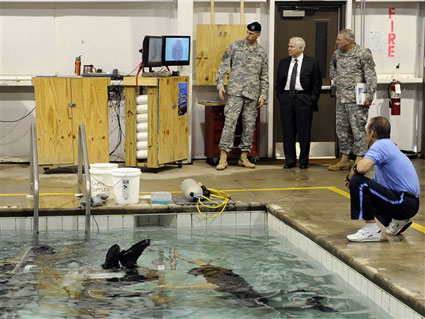 His visit came on the heels of  his announcement that the proposed fiscal 2010 defense budget would earmark $500 million to speed the delivery of helicopter pilots and crews to the battlefield.

Speaking to press traveling with him, Gates said the primary limitation to delivering much needed helicopter capability to the wars in Iraq and Afghanistan is not the number of helicopters in the Army’s inventory, but more so the ability to train and deliver pilot and crews.

“How do we quickly accelerate the throughput of trained pilots and crews? That’s the simple question and that’s where most of the $500 million is for,” Gates said.

Fort Rucker now trains about 1,200 helicopter pilots a year, about 300 less than the Army has asked for, according to Army Gen. Martin E. Dempsey, commander of U.S. Army Training and Doctrine Command, who met with Gates at Fort Rucker during the visit.

Most of that deficit is training National Guard and reserve pilots, Dempsey said.

It is that 300-pilot annual deficit that Army leaders hope to reduce by using the $500 million to hire more instructor pilots, pay for additional simulation time and more maintenance.

All will allow them to speed the delivery of pilots and crews, Dempsey said. He hopes that, with the additional funding, to be able to close the gap in about two years.

“It’s about moving people through the pipeline,” Dempsey said.

Since the wars began, Fort Rucker had expanded its training, to include more time in high-tech simulators and more time in tactical training. Dempsey said that before the wars, pilots spent less training time here, and more at their assigned units.

They would learn the basics of flying here, but would train on tactical and environmental maneuvers at their home base, he said. But, because of deployment demands, the units did not have enough time to train them.

Pilots used to spend about 150 hours in flight training here, Dempsey said, and that has been increased to between 189 and 277 hours, depending complexity of the aircraft they are training to fly.

Simulation training has doubled here, from about 20 percent to nearly 40 percent of the pilot’s total training, Dempsey said. He hopes, with the additional funds, to bump that up to about 45 percent.

Gates toured a $1 billion helicopter simulation complex while here, got a first-hand look at water survival training and took time out his tour to award a Distinguished Flying Cross to an aviation officer here in a private ceremony.

In keeping with Gate’s tradition of talking with troops face-to-face, the secretary met for about 45 minutes with 11 instructor pilots.

Gates typically will talk privately with troops during his visits, often ushering senior leadership out of the room.

“I hear a ground truth when I get out to the people doing the work that I don’t sometimes hear inside that five-sided building,” Gates said earlier.

At a press availability later, Gates said the pilots told him they needed improvements to infrastructure here, that some classrooms were crowded need technology improvements. They also echoed the need for more instructor pilots and updated maintenance facilities.

If the budget is approved by the Congress, Gates said he plans to use the time between now and when it goes into effect, to survey what changes can be made to see fast results. Gates said he hopes that could translate to more pilots and crews on the battlefield within a few months of the start of the 2010 fiscal year.

Gates fit in his stop at Fort Rucker on his way to Maxwell Air Force Base, Ala., where he plans to discuss his proposed fiscal year 2010 budget with students at the Air War College tomorrow. Gates is visiting each of service’s war colleges this week to discuss his budget stratedy at the service-specific level.