The plus-up of active duty troops will take the Army from 547,000 to 569,000 forces in what Gates characterized as a temporary increase of the Army’s “end strength” for three fiscal years.

“This is an important and necessary step to ensure that we continue to properly support the needs of our commanders in the field while providing relief for our current force and their families,” the secretary told reporters during a Pentagon news conference.

Gates pointed to escalating violence in Afghanistan and an added U.S. presence there, political turmoil in Pakistan and elimination of the so-called “stop-loss” policy of involuntarily extending a soldier’s length of service as reasons behind the decision.

“The cumulative effect of these factors is that the Army faces a period where its ability to continue to deploy combat units at acceptable ‘fill rates’ is at risk,” he said. “Based on current deployment estimates, this is a temporary challenge which will peak in the coming year and abate over the course of the next three years.”

Some 130,000 American forces are in Iraq and 58,000 are in Afghanistan, where an influx of deploying troops will bring the number to 68,000 by the end of this year, defense officials said.

“These additional forces will be used to ensure that our deploying units are properly manned, and not to create new combat formations,” the defense secretary said, adding that the decision was made after consulting with the Army’s top military and civilian leadership and with the backing of President Barack Obama.

Gates, who has described the defense budget as “zero sum,” said the cost of the Army increase would be absorbed in funding already allocated in the budget for the next two fiscal years.

“We will take that money from someplace that isn’t as high a priority as [adding] more soldiers and taking some additional steps to relieve the stress on the force,” he said. “This is a very high priority.”

Navy Adm. Mike Mullen, chairman of the Joint Chiefs of Staff, appeared alongside Gates today, and also weighed in on the decision.

“I’ve grown increasingly concerned over the last year and a half about stress on the force and our ability to meet the demands out there,” he said. “This temporary increase helps us address that concern. It will also help us get a better handle on [time at home between deployments] and boost the number of people we can deploy with the capabilities our commanders most need. 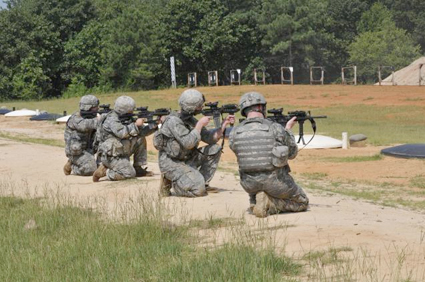