FORWARD OPERATING BASE AIRBORNE, Afghanistan, May 8, 2009 – Defense Secretary Robert M. Gates wrapped up a two-day visit to Afghanistan today, telling reporters he’s optimistic about efforts under way and the initiatives he pushed to support them – and that he’s ready to go back to Washington with a “to do” list to continue the momentum. Gates hop-scotched around Afghanistan, visiting with troops at remote outposts to get a sense of what they need to get the job done.

He held troop talks at Forward Operating Base Ramrod in Kandahar province, the new Camp Leatherneck in Helmand province and this Wardak province base, and also met privately with mid-level commissioned and noncommissioned officers to pick their brains about their unmet requirements.

Gates told reporters today he could not have received the same direct assessment in Washington about whether the programs he has championed have made a difference. “The Pentagon is so huge, you never know whether you have had an impact,” he said.

But one walk through the forward surgical facilities at the predominantly British Camp Bastion in Helmand province — the recipient of some of the additional medical assets Gates directed to Afghanistan – gave him one of the answers he was seeking.

Gates shared the gratification of visiting the hospital yesterday morning and hearing the surgeons as well as helicopter pilots describe “the difference the increased medevac assets just since January have made in terms of their ability to save lives of our soldiers and Marines, airmen and sailors that are out there, and how it has cut the time involved in getting them to first-rate medical care.”

Gates ordered an additional 10 medevac helicopters and three field hospitals to Afghanistan after being informed that many troops were unlikely to get to advanced-level treatment facilities within 60 minutes of being wounded.

Seeing the improvements now “really had an impact on me,” Gates said. “This is something that I felt strongly about, that we have the same ‘golden hour,’ as they call it, in Afghanistan as in Iraq.”

Gates said he also was impressed to hear firsthand “the real impact” that mine-resistant, ambush-protected vehicles are having in Afghanistan.

“It really was brought home to me when they showed me an MRAP that had been attacked,” Gates told reporters. “Two of the soldiers that had been inside of it were standing beside the MRAP, completely unscathed,” he said. The other two soldiers had non-life-threatening injuries.

Gates was the power behind the effort to move more MRAPs into Iraq to protect troops against underbelly explosions. Then, as security conditions began heating up in Afghanistan, he ordered more there, too. About 2,500 all-terrain models designed specifically for Afghanistan are in the theater now, with at least 2,000 coming soon, Gates told Marines yesterday during a troop talk at Camp Leatherneck.

Visiting Kandahar, Gates checked out the intelligence, surveillance and reconnaissance capabilities – which he has pushed to increase in both Afghanistan and Iraq, at a classified intelligence fusion center and sensitive-site exploitation lab. He emphasized the importance of this effort to operations under way here, with the “fusion of intelligence and operations in a way that has never been done before in warfare.”

As he returns to Washington, Gates said, he has some new issues to look into to ensure equipment hits the ground at the same time as the newly arriving troops who rely on it.

Gates said he was “struck by the comments made by some of the captains and first sergeants at lunch about the lag between some of the equipment and the troops that are coming in.”

“So that is something that I need to pursue when I get back, to see if there is some way we can make some adjustments and correct that,” he said.

Overall, Gates dubbed the trip “a very positive visit.” A highlight, he said, was interacting with deployed troops.

“One of the things … I have enjoyed the most is the opportunity to meet a lot of really great young men and women,” he said. 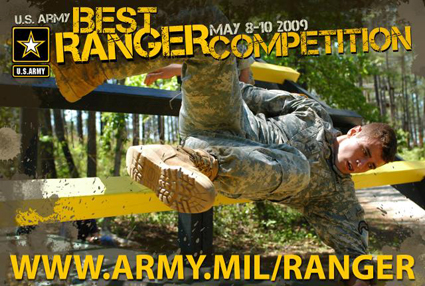 Best Ranger competition kicks off; 4 Soldiers compete while on mid-tour leave from Iraq