Gates also said he’s close to making his own decision about the best way forward. “I am moving into my personal decision phase,” he said, borrowing a phrase from White House Press Secretary Robert Gibbs.

The secretary spoke during a joint news conference with South Korean Defense Minister Kim Tae Young, after which he boarded a plane for a NATO defense ministers meeting in the Slovak capital of Bratislava.

The discussions in Bratislava will focus on far more than just troop numbers, Gates said, noting that the assessment provided recently by Army Gen. Stanley A. McChrystal, commander of NATO and U.S. forces in Afghanistan, dealt with other issues as well.

“General McChrystal has identified a number of needs in his assessment on which there is agreement,” Gates said. These range from civilian development to governance to training support for the Afghan National Army and Afghan National Police.

“So I think there is ample for us to discuss, going forward, that is completely independent of how many additional troops the president — and frankly, other members of the alliance — may decide to send,” he said.

Gates called the upcoming NATO meeting part of the “process of intense consultation” the United States is undergoing with its allies and partners as it evaluates the way forward in Afghanistan. He noted that Navy Adm. Mike Mullen, chairman of the Joint Chiefs of Staff, just met with the military chiefs of 42 coalition partners in Afghanistan, and the North Atlantic Council met twice in the lead-up to the NATO session.

With a runoff election in Afghanistan slated for Nov. 7, Gates said, there’s intense interest in making sure it’s conducted fairly and runs smoothly.

“Everybody has an interest in making sure there are as few problems with this runoff election as possible in terms of providing legitimacy for the winning candidate,” he said.

Most of the additional forces the United States and its coalition partners sent to provide security for the August elections are still in Afghanistan. This, he said, positions them to work alongside the Afghan army and police to provide the security critical for the runoff. 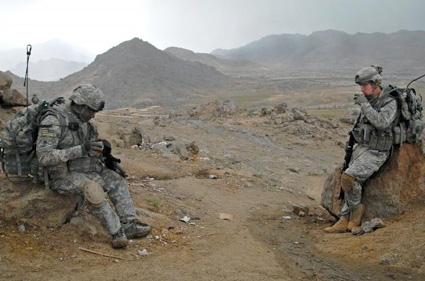 Army looks to lighten load for Soldiers in Afghanistan