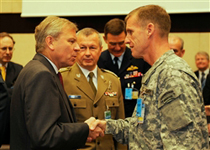 Army Lt. Gen. Stanley McChrystal stopped here on his way to his new command in Afghanistan. The general, who also has been confirmed to receive a fourth star, will take command in Kabul tomorrow.

McChrystal attended the meeting of ISAF contributing nations. NATO Secretary General Jaap de Hoop Scheffer spoke for all of the ministers in welcoming the general and wishing him luck.

“Our heads of government have declared NATO’s effort in Afghanistan to be the alliance’s highest operational priority,” Gates said as he introduced the general. “Because General McChrystal will command your young men and women in Afghanistan, the secretary general and I thought it an appropriate courtesy to you to introduce him to you in person and have him present to hear your thoughts in this meeting.”

NATO’s defense ministers are in their second day of a conference here, and Afghanistan has been the primary subject of discussion.

“I am honored to be selected to command the brave men and women who make up the ISAF, and I assure you I take the responsibility very, very seriously,” McChrystal told the alliance’s defense ministers. “I am also privileged to be here today to listen to your deliberations and to take those thoughts and guidance [with me] as I go forward.”

The discussions today will cover the gamut of issues that will confront the general as he takes command. Today, 56,000 Americans and 33,000 NATO and allied-nation servicemembers are in Afghanistan. By the end of the year, those numbers will grow to 68,000 and 35,000, respectively.

Progress in the country has not been as fast or as complete as the NATO leaders wanted, de Hoop Scheffer acknowledged. Still, he said, progress in security and governance is evident in some areas.

Security for the Afghan elections in August is the most immediate goal for the NATO forces, the secretary general said. The fact that the elections are the first proposed and conducted by the Afghan government is a sign of progress, he said, and he noted that the Afghan army now leads more than half of the operations conducted in the country.

Training for the Afghan military and police is a priority for NATO, the secretary general said, because the alliance cannot leave the country until Afghans take responsibility for the security of their own country. 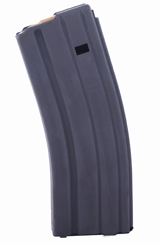 Brownells Begins Delivering On 30-Round Magazine Contract for Military