WASHINGTON, Dec. 3, 2009 – The United States will not turn its back on Afghanistan and Pakistan as it did when the Soviet occupation of Afghanistan ended in 1989, Defense Secretary Robert M. Gates said here yesterday.

“We’re not just going to throw these guys into the swimming pool and walk away,” Gates told the Senate Armed Services Committee during a hearing on President Barack Obama’s new strategy for the region.

On Dec. 24, 1979, the Soviet Union invaded and occupied Afghanistan. The United States protested the invasion. In the years that followed, America supported and armed Afghan and foreign fighters opposed to the Soviets. Pakistan was a key ally in this struggle, allowing the United States to stage the effort out of their country. The strategy paid off, and in 1989, the last Soviet tank left Afghanistan.

Then the United States left. Pakistan still had millions of Afghan refugees on its territory, Afghanistan itself had perhaps millions of dead from the struggle against the Soviets, and Afghan warlords began fighting among themselves – killing more people and devastating more areas in an already prostrate nation.

Rebuilding trust between the United States and Pakistan – both front-line states allied against terrorism – is one leg of Obama’s new strategy in the region.

Gates told the Senate panel he recognizes the Pakistani reading of the U.S.-Pakistan alliance.

“With respect to Pakistan: Because of American withdrawal from the region in the early 1990s, followed by a severing of military-to-military relations, many Pakistanis are skeptical that the United States is a reliable, long-term strategic partner,” he said. “We must change that perception.”

Leaders in Pakistan have been shocked in the last year by the inroads the Taliban have made in Pakistan, and the Pakistani army has launched offensives in the Swat Valley and in South Waziristan.

“One of the significant political developments in Pakistan over the last seven or eight months has been a strong shift in public opinion in support of the actions that the Pakistani army is taking, first in Swat and now in South Waziristan,” Gates said in his testimony before the House Foreign Affairs Committee yesterday.

The threat to both Afghanistan and Pakistan is a nexus among al-Qaida, the Pakistani Taliban and the Taliban in Afghanistan. “And they are mutually reinforcing, both in their narrative and in their operations,” the secretary said.

Many Pakistanis are Pashtu, which also is the largest ethnic group in Afghanistan. The Pakistani military and intelligence service developed relationships with Afghan extremist groups when those groups were battling the Soviets.

“They have maintained some of those contacts and those relationships, frankly, as a hedge because of their uncertainty whether the United States would be a reliable partner and ally for them going forward and whether we would remain in Afghanistan until we were assured of success in taking care of the extremists,” Gates said.

Making progress against al-Qaida and the Taliban in Afghanistan will encourage Pakistani leaders that the United States intends to stand by its allies, Gates said. “As we make progress and as they make progress, their incentive to change this approach, to opt strategically to partner with the United States, becomes significantly more powerful,” he said.

“We will not be leaving or paying less attention to South Asia,” Jones said. “We have strategic interests in the welfare of Pakistan and its neighbors. And we have an intention to stay engaged for a long period of time, because of the importance of the region.”

Gates emphasized this on Capitol Hill yesterday. “Let me just say … what is essential for our national security is that we have two long-term partners in Afghanistan and Pakistan,” Gates said.

The president, Gates and other leaders have reassured Afghan and Pakistani leaders that Obama’s announcement that U.S. troops in Afghanistan will start to come home in July 2011 does not mean America will walk away from the region.

“Quite frankly, I detest the phrase ‘exit strategy,’” Gates said during testimony at the Senate. “What we are looking at over time is a transition in our relationship with the Afghans,” he said.

The military relationship is prominent now, “as we try to secure the country and put it in a position where they can accept responsibility for their own security and, frankly, to prevent al-Qaida from coming back,” the secretary said.

“But over time, as we are successful in that, the civilian component and the development component of our relationship with Afghanistan will become predominant,” he continued. “We may have a small, residual military training and equipping role with Afghanistan in the future, but this goes to the point I made in my testimony: We must not repeat the mistake of 1989 and turn our backs on these folks. And when we’ve got the security situation with them under control, then the civilian and the development part must be the preponderant part of our relationship far into the future.” 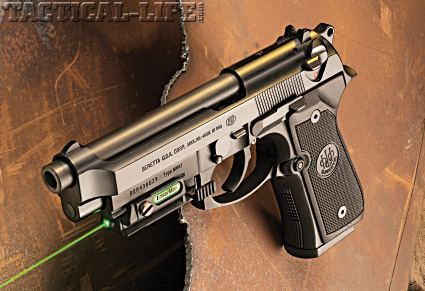 The Beretta’s Military Classic M92 9mm handgun has been the US Forces’ combat sidearm...