Gates, here for a NATO ministerial, emphasized that he is in a “listening mode” and not pressing for specific contributions.“This was not the forum for anyone to express a view of any commitment,” he said.

McChrystal’s resource requests, including troop recommendations, are working their way through the NATO chain of command and will be addressed at a force generation meeting next month, he said.

However, Gates said several allies have indicated that they will, or are leaning toward, increasing their military or civilian contributions, or both. “I find that very heartening,” he said.

He also said he received “mounting endorsements of McChrystal’s approach” during his sessions here.

Gates said his goal is to take what he hears here back to President Barack Obama to consider as part of his strategy review for Afghanistan. The national security team is expected to provide the president several options within the next two or three weeks, he said.

The “analytical phase [of the review] is beginning to come to an end, he said, and the U.S. national security team is likely to provide different options for Obama within the next two to three weeks.

Multiple issues will be factored into that decision, he explained. “The question is: Do we have the strategy right in light of the situation we face? Does it need refinement in some way? And if it does need some adjustment — in light of the events that have taken place over the last number of months, including the elections and so on — what are the implications … in terms of General McChrystal’s resource request?”

Gates, Navy Adm. James Stavridis, supreme allied commander Europe, and McChrystal all are participating in the ministerial. McChrystal was slated to brief NATO and non-NATO countries supporting the International Security Assistance Force mission about conditions on the ground during a working lunch.

Today’s talks also highlighted the need for a common NATO and ISAF counterinsurgency doctrine and a more common approach to training for out carrying out counterinsurgency There’s “not enough shared experience about what works and what doesn’t,” Gates said.

The defense ministers also discussed the need to speed up training of Afghan security forces, and the importance of improving governance in Afghanistan, dealing with corruption and establishing legitimacy of the Afghan government.

Gates said he assured the NATO allies that the United States “has no intention of pulling out of Afghanistan or abandoning our core mission there.”

“It is a mission we deem critical to our national security and vital national interests,” he said.

Ensuring that Afghanistan becomes solid enough to stand up to the insurgency is critical not only to its future, but global security, he said. “This is the only way to fight against terrorism.”

Toward this end, Rasmussen said there should be “no doubt about our determination” to fulfill the mission in Afghanistan. “We should remain as long as possible” to ensure it succeeds, he said. 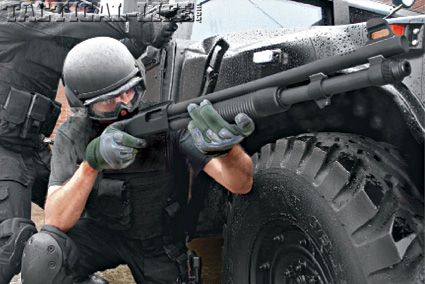 A Special Purpose Xtreme, the Mossberg 590A1 SPX is the next step is the...