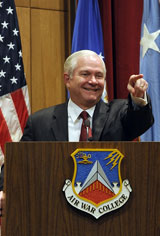 MAXWELL AIR FORCE BASE, Ala., April 15, 2009 – Defense Secretary Robert M. Gates today made his second stop this week at a service war college, spelling out his thinking behind shifting $13 billion in warfighter programs away from traditional supplemental funding and into his base fiscal 2010 budget proposal.

This is the first time Gates has traveled to speak to each of the services after releasing a budget proposal, and the trip speaks to the significance of his shift in focus to transform the Defense Department bureaucracy and balance the need to plan for future conflicts while providing for today’s troops and families.

“How do we establish within the … Department of Defense bureaucracy the ability to walk and chew gum at the same time?” Gates asked while speaking to Air Force leaders attending the Air War College here. “[How do we gain] the ability to plan for future war and at the same time have people come to work every single day saying, ‘What can I do to help the warfighter today?”

The secretary said his budget recommendations are a reflection of his past two years in office, during which he has struggled against an unwieldy bureaucracy to get equipment quickly to troops in combat and proper care for them when they return home.

“I kept running into the fact that the Department of Defense as an institution … was itself not on war footing, even as young Americans were fighting and dying every day,” he said.

The secretary offered a frank assessment of the department’s struggle to balance its ability to plan for the future and fund the current war requirements, saying that so far it has not yet met that challenge. He put the onus for finding that balance squarely on the shoulders of top leaders within the Pentagon and the individual services.

“It is the willingness of service heads … to say … ‘You’re going to find room in your base budget to take care of these problems,’ and then seeing to it that it happens. I don’t know any other way to make it happen,” Gates said.

Gates said his budget recommendations were more about ideas than dollars. He would have made the same recommendations regardless of the bottom line on the budget, he said.

His trips to the war colleges signal that Gates would like to see this shift propelled past his tenure in office, as he reaches out to the up-and-coming leaders in each of the services and taps into their vast network of military colleagues.

“It’s these broad set of ideas that I want to talk to these men and women about as opposed to … budget numbers, and get them thinking about these issues,” Gates said.

Today Gates emphasized that the Defense Department must prioritize taking care of troops and families, rethink its notions of future conflicts, and fix its problems with acquisitions.

Shifting family programs from supplemental appropriations to the base budget ensures those programs will be sheltered, he said.

“I was worried that, as budgets are constrained in years to come, the more we added supplementals that had to do with people, the more vulnerable that money would become to be taken for something else,” Gates said earlier.

The secretary’s recommendations distribute funds in alignment with what he characterized as the type of “complex hybrid” warfare he expects will become increasingly more common. Gone are the days of the black-and-white distinction between irregular and conventional warfare, he said, calling the model “outdated.”

“We must understand that we face a more complex future than that — a future where all conflict will range along a broad spectrum of operations and lethality,” Gates said.

This is largely why the services need to look harder at joint acquisitions with joint capabilities and steer away from service-specific purchases, Gates said.

The military needs to shift away from service-centric combat platforms that are costly, complex and require lengthy and limited production, he said. The pace of technological and geopolitical change and the range of possible contingencies force the department to look harder at multi-service solutions that can be produced on time, on budget and in significant numbers, Gates said.

This is illustrated in Gates’ recommendation to halt production of the F-22 Raptor at 187. He called the fighter jet a “niche, silver-bullet solution,” and opted instead to accelerate the production of the fifth-generation F-35 Joint Strike Fighter.

“Focusing exclusively, or obsessively, on a single weapons system designed to do a specific job or confront a single adversary ignores what a truly joint force can and must do in the 21st century,” Gates said. 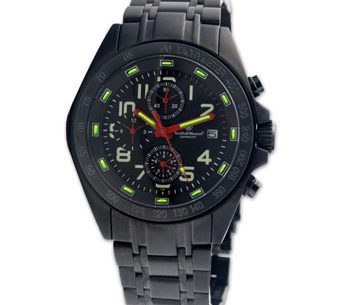