Gates told the National Guard Bureau Senior Leadership Conference he wasn’t initially a fan of the so-called “contiguous mobilization” plan he approved earlier this month at the Army and National Guard leadership’s request.

The plan authorizes reserve-component members to conduct pre-deployment training – frequently by amassing scheduled annual training and weekend drill periods into a block period – without counting it as part of their official mobilization cycles.

The exception to policy will last for one year as the Defense Department studies its impact and effectiveness, Gates said today.

Gates emphasized that he remains committed to the 12-month mobilization policy he instituted for reserve-component members, and thought long and hard before approving the contiguous mobilization plan.

“I really wrestled with this, worried our soldiers would see it as breaking faith with my decision in January 2007 to limit mobilization to 12 months,” he said. “But I was persuaded that contiguous training may lead to improved combat preparation for our reserve-component servicemembers.”

He said he also realized that contiguous mobilizations would support another goal: giving Guardsmen and reservists more predictability about deployments.

“I was told that, by grouping training [periods] together immediately before federal mobilization, the reservists, their families and their employers may realize more stability and predictability within the deployment cycle,” he said, prompting the audience to jump to its feet in broad applause.

“Thank you for that,” he told the group. “It truly was a difficult decision for me.”

Navy Adm. Mike Mullen, chairman of the Joint Chiefs of Staff, told the group the new policy is designed to reduce the “churn” within reserve-component members’ lives as they balance their military and civilian obligations.

“I worry about Sergeant Jones sitting at the table in his civilian capacity with his family looking at their future, having some predictability, along with the employer,” Mullen said.

Gates thanked the leaders who brought the issue to his attention, and said he was gratified by the deliberate process, with well-considered solutions, that led to his decision.

The Defense Department will gather information during the next six months or so to support an analysis Gates said he hopes charts a “clear way ahead” about whether to continue contiguous training.

Gates and Mullen both emphasized the need to build more predictability about deployments and “dwell time” at home between deployments for the Guard and reserve.

Expanding the active Army’s end strength will translate into less demand – and stress – on the National Guard, Gates said.

The secretary emphasized the long-term need for support networks established for reserve-component members during their deployments and after they return home.

“You have made great strides in all of these areas to reduce stress and improve quality of life for the force, but don’t let up,” he said. “Our current engagements will keep forces on foreign soil at some level for years to come.”

Both Gates and the chairman praised the multiple roles the National Guard has played, both in Iraq and Afghanistan, as well as at home in responding to natural disasters and security threats.

“We could not have done it without you,” Mullen said.

“Please convey to your Guardsmen my thanks for their significant contributions to our national security,” Gates said. “The service Guardsmen render to the nation and the cause of freedom around the world represents the best America has to offer.” 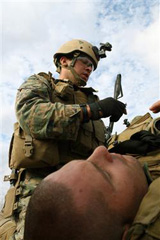