Gates met with President Barack Obama before Christmas and committed to another year on the job, Morrell said.

Then-President George W. Bush nominated Gates for the job in December 2006, and Obama asked the secretary to remain as defense secretary when his administration began in January 2009. Gates is the only Cabinet member to span both administrations.

Gates has worked to remake the way the Defense Department does business, and another year in office will give him another opportunity to shape the department’s budget. In the fiscal 2010 budget, for example, the secretary recommended ending the F-22 Raptor program and concentrating on the F-35 Lightning II joint strike fighter. He also ended the Army’s Future Combat System and pledged the money to other Army programs.

He drove the effort to buy and rapidly deploy mine-resistant, ambush-protected vehicles to protect servicemembers in Iraq from roadside bombs and to provide all-terrain versions of the vehicles for troops in Afghanistan.

Gates took over at a tough time for the department. The troop surge in Iraq was just getting under way, and casualties in the fighting were mounting. Gates also was in charge when revelations about substandard conditions at Walter Reed Army Medical Center came out. He fired the Army secretary, the service’s surgeon general and the commander at the facility. He has concentrated attention on care for wounded warriors and putting in place systems so the Defense Department and the Department of Veterans Affairs can work together.

Amid concerns over the Air Force’s handling of its nuclear weapons, Gates asked for and received the resignations of the service’s secretary and chief of staff in June 2008.

More recently, Gates has been instrumental in developing the new Afghanistan-Pakistan strategy.

As with any appointed official, Morrell noted, Gates serves at the pleasure of the president.

“[The president and Gates] agreed to revisit this issue again later this year, but for all intents and purposes, their original agreement still stands: he serves at the pleasure of the president indefinitely, and he is honored to do so, though he certainly looks forward to one day retiring to his family home in the Pacific Northwest,” Morrell said. 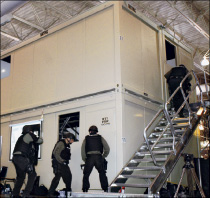