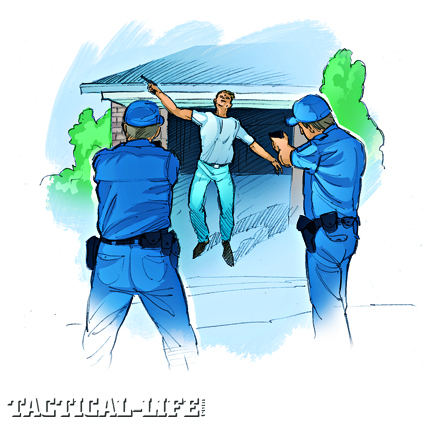 Duluth, Georgia P.D. recently faced down a barricaded suspect after he emptied his revolver in the police department’s parking lot while dissuading his wife from filing a complaint against him. Said wife drove to the police department from her home approximately one block away to file a complaint against her husband. Her husband walked to the police station from the same house and, as the wife parked the car and prepared to exit the vehicle, emptied the revolver into the passenger compartment. All six shots fired missed the wife.

Simultaneously, the wife ran into the police station, the police ran out of the station and the husband ran back to his house. The police observed his flight across the street and into his home. Two officers followed the suspect back to his home and, when they knocked on the front door, gunfire erupted from both within and without the house. One officer was wounded in the leg as several more officers appeared on the scene.
The barricaded suspect fired on the officers outside his home by moving from upstairs window to upstairs window, breaking the glass with the muzzle of his pistol. At each window he would empty the revolver, then reload as he moved to the next one.

The shootout ended when the suspect came down to the garage and hit the garage door opener, opening the door and exposing his armed self to officers in the driveway. The officers responded with a smallarms volley; one round struck the suspect between the running lights, bringing an  end to his rampage. 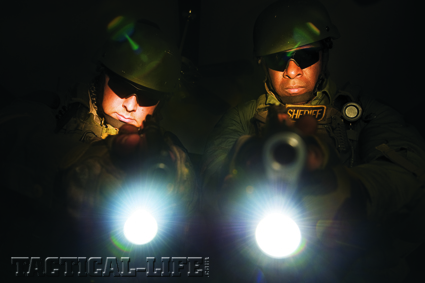 Duluth, Georgia P.D. recently faced down a barricaded suspect after he emptied his revolver…