by Jay Collins
in Guns, Rifles
0

"...GSG and American Tactical did an excellent job of providing American shooters a very impressive historical rifle that is both accurate and easy to shoot. The “rebel/zombie” element gives it extra cachet as a rifle that could have come from the cold, dead hands of a Somali pirate or a survivor of the zombie hordes."

Think of a soldier or rebel holding an AK-47. No other firearm better symbolizes the sterilized term “conflict zone.” The AK and its variants have been produced off and on continuously in two-dozen countries and in numbers of over 100 million. It is the most ubiquitous firearm ever produced.

The creation of the AK-47 brought fame and distinction to a young veteran tank mechanic/driver named Mikhail Timofeyevich Kalashnikov. Lying in a hospital bed recuperating from a combat wound in WWII, Kalashnikov began to design a new weapon system, a submachine gun
that never gained popularity but earned him recognition as a designer. In this new role, he focused on delivering a rifle for the next Great Patriotic War—the most recognized rifle in world history.

Introduced in 1947 and manufactured in Izhevsk, Russia, the AK-47 is his legacy. Kalashnikov worked for Izhmash for 60 years, until his retirement, developing additional weapon systems, including the AKM, which uses a stamped sheet-metal receiver, the RPK, which is a beefed-up AK that serves as a squad automatic weapon, and the PK belt-fed machine gun, which uses the 7.62x54R cartridge. Outside the factory there stands a statue of a young Kalashnikov in recognition of his long and dedicated service to his nation.

Of course, the Soviets were not exactly known for their adherence to intellectual property rights, and licensed and unlicensed copies of the AK proliferated. The Soviets were also more than happy to distribute these to friendly nations during the Cold War. The simplicity of the design, the low cost of manufacture, the ease of use with limited training, and the rifle’s incomparable reliability only added to its popularity around the world.

The AKs frequently encountered in faraway places are often decades old and extremely well used. The lack of suitable armories, supply chains, logistics or qualified armorers has resulted in a hodgepodge of field-expedient repairs using whatever materials are at hand. Repairs can include taping together loose or broken stocks or handguards, or wrapping broken or missing stocks in rags. Broken magazines may also be taped in order to work, or taped together for faster reloads. And still, AKs found in this miserable state will continue to function.

It is this reputation and character that German Sport Guns (GSG) wanted to capture with its Rebel AK-47, which was distributed in the U.S. by American Tactical a few years ago. And though the company no longer offers this specific model, you can find some on the secondary market. The Rebel AK-47 is a semi-automatic, blowback-operated replica chambered in .22 LR that is intentionally designed to look like it’s endured years of hard use.

GSG has been making .22 LR replicas of famous and popular full-sized combat rifles for over a decade, including MP40s and StG 44s. The company also makes airsoft versions of popular guns. These offerings are very popular because of the less-restrictive ownership laws in Europe concerning rimfire firearms and the significantly lower cost of .22 LR ammunition.

As with all of its offerings, German engineering and a commitment to authentic detail are evident throughout the Rebel AK. The outward appearance of the rifle is a mix of AK-47 and AKM, with the addition an optics rail on the left side of the receiver. GSG does offer an optional scope mount that fits this rail. The GSG rifle uses a receiver made from zinc alloy; in fact, most of the rifle is either wood, polymer or zinc alloy. Only the springs, bolt, screws, barrel, barrel sleeve, receiver cover and cleaning rod are made of steel.

The metal parts have been Parkerized and then hand-weathered for a worn look. The wooden stock appears in good condition; however, GSG has added medical tape around the handguard and at the bottom of the two 24-round magazines provided. In addition, the stock has a red bandana “tied” onto it. The bandana is actually just wrapped around the stock and secured with staples. It is not uncommon for unconventional troops to personalize their weapons in this manner.

Interestingly, this rifle was marketed as a “Zombie AK.” When you think about it, why not? The conditions that will accompany the zombie apocalypse are not dissimilar from those found in random Third World combat zones, and firearms used to dispatch the zombie hordes will likely face tough field conditions, lots of use and infrequent cleaning or maintenance. They will be relied on for survival and expected to work under any condition. Come to think of it, the AK may be your best bet for zombies.

The 16.5-inch, six-groove-rifled steel barrel sits inside a barrel sleeve that closely matches the contours of the original. Of course, the gas tube and gas block are just for looks. The front of the barrel has a removable nut that can be replaced with a flash suppressor or sound suppressor adapter.

The sights are fairly standard AK, with both the front and rear being elevation-adjustable but not adjustable for windage. The controls are also standard AK, including the reciprocating changing handle, paddle-style magazine release and right-side-mounted safety, with up for “safe” and down for “fire.” This lever is actually longer than that on an actual AK and includes a bolt-hold-open device. The operation of the Rebel AK is also very straightforward, with magazines rocking into place like on the original.

The magazines are made of heavy polymer and match the contours of the original steel magazines down to the rear strengthening rib. On the last shot, the bolt locks open, but to engage the safety it must be pulled farther to the rear. When you load a fresh magazine, simply press the safety down to the “fire” position and the bolt will release to chamber a round. The rifle is ready to fire, but the safety can be put back in the “on” position if desired. There is also a magazine disconnect safety that will prevent the rifle from firing if no magazine is inserted.

While the Rebel AK certainly looks like an AK on the outside, the similarities are only skin deep, and inside it is an altogether different animal. The original AK has a very simple system for disassembly and cleaning—the GSG version, not so much. You first have to make sure the gun is empty and decocked. Next, remove the stock by removing the two top and bottom stock screws. Remove the dust cover, which is done exactly like on a real AK. Then you unscrew and remove the rear trunnion and stock adapter, and then the whole pistol grip firing mechanism assembly drops out. Finally, the bolt carrier and bolt can be removed to provide access to cleaning the barrel.

Overall, the disassembly is not complicated, but it does involve a lot of small parts and screws you do not want to lose. The handguards can also be removed with the original AK-style handguard latch at the rear sight block. You do have to loosen a retaining screw at the front of the mock gas block. Also, the handguard band can be loosened and the lower handguard removed. Keep in mind that on the Rebel AK the handguards are taped together, so you will have to cut or remove the tape to do this.

One thing I did like is that the cleaning rod is fully functional and not just for looks, plus it is screwed into the receiver, not snapped on like the original, which provides a much firmer and more secure hold. There is no bayonet lug, however. 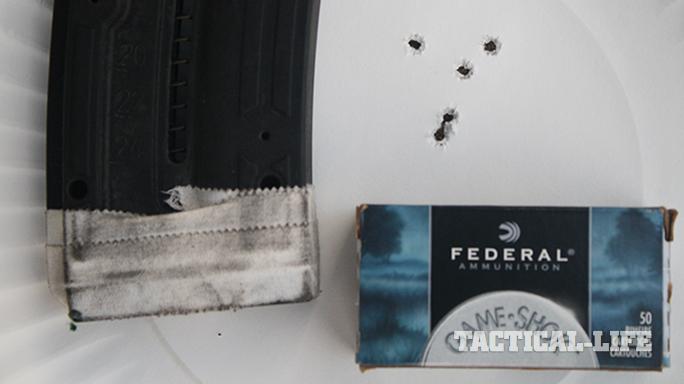 On the range, the Rebel AK performed very well and handled easily. Given its weight, which closely matches that of a real AK, the .22 LR cartridge kicked even less than normal and there was no muzzle rise, making it very easy to stay on target during fast shooting off-hand. In true AK fashion, I did not experience any malfunctions, but I did stick with high-velocity ammunition as the manual suggested. As a scope mount was not included, I could not mount an optic, so all of the accuracy results were completed using iron sights from a benchrest at 50 yards.

The lack of adjustment did necessitate about 3 inches of Kentucky windage towards the left, but once I got my hold right, the accuracy results were fairly good, with averages across three different types of ammunition remaining under 2 inches and my best five-shot group at just 1 inch. The long and mushy trigger, while certainly AK-like, was heavy at over 10 pounds and not conducive to good accuracy. I imagine with a good optic and a better trigger this rifle would be capable of significantly better results. My only other complaint is that there is a real AK-type sling attachment point at the front but no provision for a sling at the rear.

When all was said and done, GSG and American Tactical did an excellent job of providing American shooters a very impressive historical rifle that is both accurate and easy to shoot. The “rebel/zombie” element gives it extra cachet as a rifle that could have come from the cold, dead hands of a Somali pirate or a survivor of the zombie hordes. Check around for a copy of the GSG Rebel AK-47—it’s well worth your time.