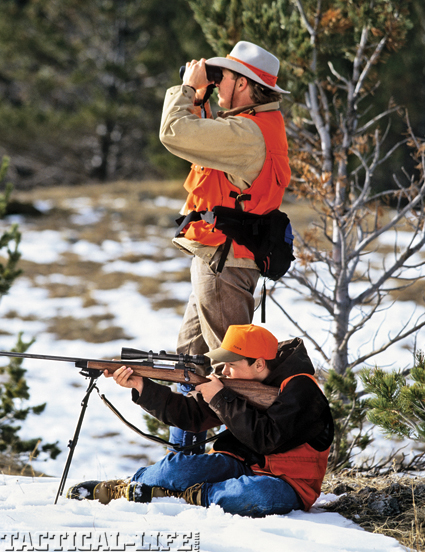 Dads don’t want their kids thinking about recoil when a trophy is in the scope!

For every action, there is always an equal and opposite reaction. Or, the forces of two bodies on each other are always equal and directed in opposite directions. For those of you who have forgotten your physics, that’s Newton’s Third Law. It directly applies to recoil in the sense that the force on the bullet moving forward equals the force on the rifle moving backwards. The main difference in these two forces is the weight of the bullet compared to the rifle. But, in hillbilly terms, the harder a rifle shoots, the harder it will recoil.

Did you ever trade 6-inch punches with your buddies in junior high school? Sure you did. And it hurt. You did it anyway because you wanted to show the other boys—and girls—how tough you were. On the bus ride home, you rubbed your shoulder and secretly wished you wouldn’t have to do that again for a long time. Nobody likes pain, and that’s what recoil is. Adult men, like young boys, often take pride in their ability to withstand or experience pain. During a visit to the Norma ammunition factory a few months back, two Germans took turns shooting a .500 Nitro and giggling. That evening at dinner they bragged about their experience but were admittedly shaken by the event. 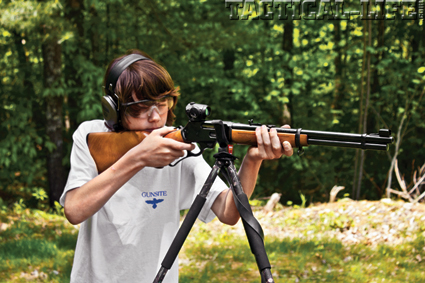 The .30-30 cartridge does not deliver a lot of recoil, but many kids will still find it objectionable without a soft recoil pad.

Physics Lesson
It’s always been common fun to coerce a young man into shooting a 12 gauge with magnum loads and then laughing at the look on his face. This did nothing to help the adolescent’s shooting skills. Two things—recoil and noise—are directly responsible for flinching or jerking when you pull the trigger. This is precisely why it’s easier for kids to shoot a .22 rifle well: low noise and minimal recoil.

There are two physical factors when it comes to recoil: energy and velocity. Another factor that’s more subjective is felt recoil. Felt recoil varies from shooter to shooter and is based on how the rifle they are shooting fits their body, their physical makeup and their tolerance to pain. It’s critical when working with kids to choose a rifle with appropriate recoil energy and velocity, but it’s also important to make sure the interface between the youngster and the rifle limits felt recoil.

Recoil energy and velocity can be calculated. There are various online tools to help you with this math problem. I use the Sierra Infinity ballistic software program for recoil calculations. You’ll need to know the rifle weight, bullet weight, muzzle velocity and charge weight (how much powder is inside the cartridge case). Powder charge weights are not listed on ammunition boxes, but you can go to the Hodgdon website and look in the handloading section and make a good estimate. Being off a few grains in powder charge will have minimal affect on the calculation.

How much recoil can a kid withstand? That depends on the kid and the rifle. Let’s use my 11-year-old son, Bat, as an example. Bat can shoot any .223 Remington rifle comfortably. Using a 7-pound rifle (weight with scope) as a fixture of the equation, a .223 Remington will generate about 4 foot-pounds of recoil at a velocity of about 6 FPS. It’s been my experience that any kid large enough to handle a 7-pound rifle is comfortable with a .223.

Recently, Bat and I tested Browning’s new X-Bolt Micro Midas bolt-action rifle. This rifle has a 12.5-inch length of pull and weighs 7 pounds with the scope. But, it was chambered for the 7mm-08. Recoil calculations will tell you this rifle will shove back at about 12 FPS with 16 foot-pounds of energy (FPE)—twice as fast and four times as hard as a .223 Remington. I expected the recoil would be too much for Bat. I was wrong.
In one sitting, Bat fired a box and a half of ammo through this rifle and never winced. Why? The rifle’s stock fit him well and had a nice, thick Inflex Technology recoil pad. A few days later, we were testing a new youth rifle from Marlin called the 336Y chambered in .30-30 Winchester. A 7-pound .30-30 will have about 10 FPE of recoil energy and move rearward at about 10 FPS when using 150-grain bullets. This is noticeably less than a 7mm-08 Remington. 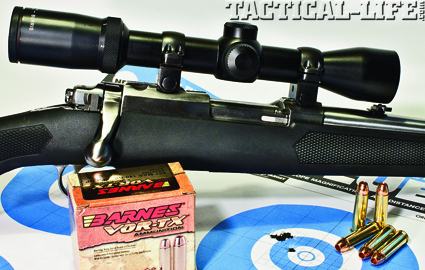 Rifles chambered for revolver cartridges, like this Ruger 77/357 in .357 Magnum, are light-recoiling options for hunting big game.

Bat fired three rounds from the Marlin and said, “I don’t like this rifle.” I asked him why and he simply said, “It kicks too hard.” I was a bit perplexed but shouldn’t have been. The Marlin 336Y does not have a recoil pad, only a hard plastic buttplate. To me, the recoil was less intense than that from the 7mm-08. To Bat, it was painful. For what it’s worth, I talked with Marlin representatives about this and they assured me that ultimately the 336Y will indeed have a buttpad installed from the factory. When this happens, this rifle will be suitable for young hunters.

One thing you can do if you’re working with a rifle that might be generating slightly too much recoil is to step down in bullet weight. Lighter bullets generate less recoil. For example, a .243 Winchester shooting a 100-grain bullet will generate 11 FPE. Step down to 80- or 85-grain bullets and recoil energy will be reduced by about 5 percent. Handloading your own ammo to lower velocities is also an option.
It’s very important that kids are not in pain when they’re shooting. Recoil isn’t just about numbers. Yes, they are important when all things are equal, like when comparing two identical rifles chambered for two different cartridges. However, when comparing different rifles, a critical part of the equation is how these rifles fit the kid that will be shooting them. This is something that you will have to uncover with experience—not a calculator. 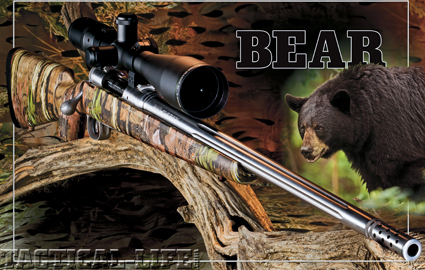