GET PUMPED FOR GIANT BUCKS

0
SHARES
0
VIEWS
Share on FacebookShare on Twitter
A trophy buck can suddenly appear then disappear in a heartbeat, especially during the rut when bucks are seeking hot does 24/7. Whether still-hunting or snow tracking, you need a rifle that can get on target fast.

The fresh tracks in the snow told the story, plain and clear. A buck was in front of me, not too far ahead actually, bird-dogging a doe and fawn. I had caught a flash of white 10 minutes earlier, and was sure it was the buck I was following, but not sure enough to pull the trigger. So I trudged on ever alert to what was ahead of me along the trail.
An hour went by. I jumped the deer twice, as evidenced by the running tracks in the snow, but did not spook them badly enough for them to bolt for any long distances. The trio soon led me down a wooded slope, across an ice-covered creek, then back uphill towards the top of a steep ridge where they stopped to mill around for acorns before dropping down the other side of the hill through a recently logged-over area. 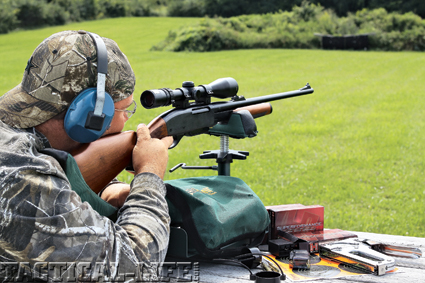 The Remington Model 7600 puts to rest the myth that pump-action rifles are inaccurate and unreliable. These rifles are extremely easy to operate and become second nature.

There were plenty of blowdowns for a buck to hide behind, so I went high and circled around, but soon found where they crossed another creek and headed uphill again through some open hardwoods. That is where I caught up to them. I raised my scope and could see bone atop one of the deer. Not a lot of bone, mind you, but a small and rather unremarkable eight-point rack. 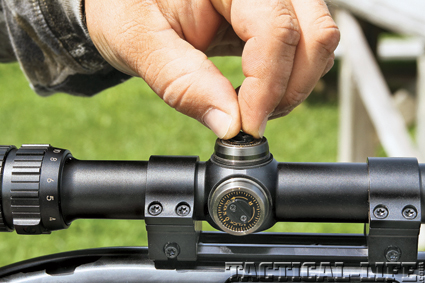 The Elite was easy to adjust for windage and elevation.

He somehow sensed I was behind him, snorted and bolted uphill. I touched off a round, but I could see in the scope where it splintered a standing dead tree. I quickly pumped in a second round and squeezed the trigger again. The buck arched his back and dropped his head at the shot, and then took his death run for 50 yards or so before piling up with a single .30-06 bullet hole through the boiler room.