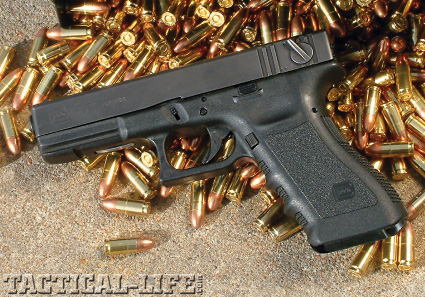 As Glock models go, the “18” has been around for quite some time, since about the mid-80’s. Glock basically numbers its pistol models in chronological sequence. Therefore, as the Glock 17 was Glock’s first pistol project, the 18 followed shortly thereafter, then 19, 20, etc. There are exceptions, such as the long-slide 17L target model. But with few exceptions, the model number indicates caliber and size of each Glock.

When the Glock 18 was created, it was an eminently useful tool to directly combat terrorism, particularly the evil, cowardly and horrendous attacks against innocents in some of Europe’s public places during the 1970’s and 80’s. Basically, a terrorist team in civilian clothing would enter a train station or airport, draw small automatic weapons and explosives from concealment and slaughter innocents. Eventually, the official response was to place military or para-military teams in public spaces with fully automatic weapons typically, that country’s issue sub-machine gun to provide an immediate response to the threat.

As with many things diabolical, the terrorists adapted their tactics by watching the teams and waiting until they were out of the area or otherwise off-line before launching an attack. The response was to form “undercover” teams, and it was deemed necessary for them to have fully automatic capability. The Glock 18 was the ultimate piece of equipment for these warriors.

Historically, European and Chinese military organizations had a “fondness” for what we may call “machine pistols,” i.e., weapons with the configuration of a handgun but having fully automatic fire capability. From the late 19th century on, many pistol manufacturers had a machine pistol in their line-up and most manufacturers at least experimented with the genre. Generally speaking, they were difficult to control, and most makers included a shoulder stock in an attempt to address the controllability problem. Aside from the possible psychological impact, machine pistols were usually most useful for making spent brass that is, until the Glock 18 came along.

As Glock models go, the “18” has been around for quite some time, since…