by Paul Markel
in Guns, Handguns
0

For most seasoned officers, getting dispatched to a “911 hang up” is hardly enough to raise your pulse five additional beats. Experienced cops soon learn that nine out of 10 times these hang ups are either an autodial mistake or, most often, a kid screwing around. This doesn’t mean you should not take every call seriously but human nature is what it is. 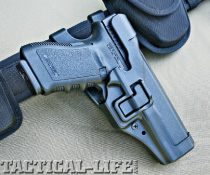 Wanna-Be Cop Killer Down
It was mid-afternoon in Huntington Beach, California when a police officer was sent to investigate a 911 hang up from a local hair salon. Upon entering the business, all seemed calm. A man behind the counter immediately assured the officer that the call was a mistake. Officer Nick Ekovich of HBPD was leery and instructed the man to produce some identification. Instead of an ID he pulled a compact 9mm pistol and opened fire on the policeman. Officer Ekovich drew his department issued Glock 21 pistol.

In the span of only a few seconds, Ekovich was struck six times by rounds from the gunman’s pistol. At the same time, he returned fire with his .45 ACP jacketed hollow point ammunition. The gun battle took place at what some would call “bad breath” range.