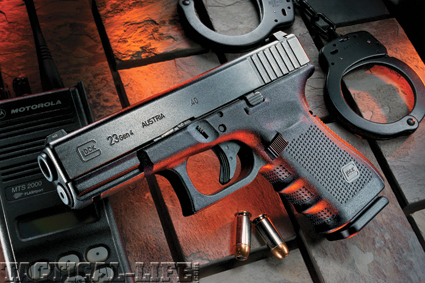 The Glock 23 Gen4 version includes the most significant modifications to date on this polymer pistol, which has become a law enforcement staple over the past 25 years.

I had been out of the police academy for about a year when I received my first Glock 23 as a Christmas gift. My young bride understood that it was the top of my wish list and surprised me with it. At the time there were two pistols that I knew very well, the M1911A1 and the M9—both of which I carried as a United States Marine. The Glock was a novel item to me. 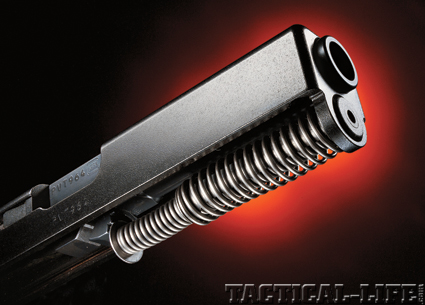 The dual-captivate recoil spring, originally found in the G27, is now standard for all Gen4s.

It may be difficult for some of the younger readers in the audience to imagine, but Glock was not always at the top of the law enforcement gun list. Back in 1993, when I received my G23 it was a brand new model, the six-digit serial number began with an “A.” Back then the Glock pistol was a relative upstart in the police world. When I attended the Academy, a total of one cadet was using a department-issued Glock. 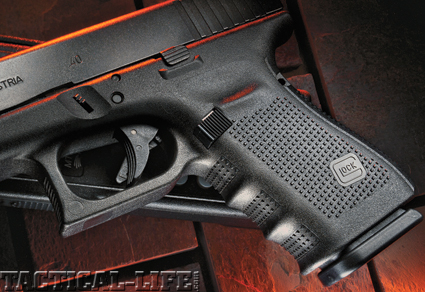 The Rough Textured Frame is perhaps the most noticeable difference from the earlier models.

Today that has all changed, and during the last two decades the Glock series of pistols have undergone numerous changes, most of them cosmetic. In their 25-year history, it is the Glock Generation 4 (Gen4) that has seen the most significant upgrade.

The Glock 23 and its larger sibling, the Glock 22, are by far the most popular of the line with today’s law enforcement agencies. Local, state, and federal agencies all field them. I recall the stir that the FBI caused some years ago when they approved Glocks for carry by special agents. The compact G23 version generally sees the majority of service as a plainclothes or undercover pistol, while the G22 is a uniform duty gun.
Amongst all the other attributes, the Glock is most definitely “armorer friendly.” Back in the old days, a department’s armorer needed to attend a week-long school and purchase a battery of tools to keep an agency’s handguns up and running. That’s not gunsmithing—that’s just for parts changing.

The Glock Armorer’s Kit is a single punch. If you want to get fancy, you can throw in a sight adjustment tool and a set of angled needle-nose pliers to help you get at the magazine release button spring. There isn’t much more to it. As a result of the pistols’ robust design, most Glock armorers are about as busy as the fabled Maytag repairman.

Quite naturally, the Glock 23 Gen4 version shares many attributes and features of the original model. The pistol uses Glock’s “Safe-Action” striker-fired system with three safety mechanisms. A 64 HRC dark coating is applied to the steel slide and the frame is constructed of high-strength polymer.

The .40 caliber G23 is cataloged as a “Compact” version with a 4.02-inch barrel. The overall length of the slide is 6.85 inches and it is 5 inches high. Empty weight for the pistol is a mere 21 ounces. A 13-round magazine feeds the pistol, but higher capacity magazines will work in the gun.

Numerous sight configurations are available. The model featured herein has the factory night sight set up, with tritium inserts in the front and rear. Rampant popularity of the pistol has led to a myriad of aftermarket sights being built for the Glock series, including my personal choice—the XS 24/7 Express Sights.

The new Gen4 version includes three primary enhancements to the G23 pistol. These include the new Multiple Back Strap (MBS) frame, a reversible and enlarged magazine catch, and a new dual-captive recoil spring. On the grip you will also note the Rough Textured Frame (RTF), a unique new surface texturing.
Considering the upgraded MBS frame, Glock includes two additional backstraps — medium and large. The small backstrap is simply the pistol in stock configuration. A special tool is included as is a polymer pin to hold the medium or large backstraps in place. Installing and swapping the backstraps is a simple process that takes only a minute or two.

The dual-captive recoil spring is not a new item for Glock. They’ve been using this spring system in their sub-compact pistols for many years now. However, using this design on a compact or full-sized pistol is new. There is no getting around the fact that the .40 caliber pistol cartridge is a high-pressure, snappy little round. The new spring configuration helps to damp-en some of the recoil from the cartridge.
Regarding a reversible magazine catch, it was simply a matter of time before Glock included this feature. Left-handed folks can work a “right-handed” magazine catch with the proper training, but all of the competing pistols have ambidextrous or reversible magazine catches. The die was cast.

Shooting Impressions
In order to get a serious workout with the new G23 Gen4, I secured several boxes of .40 caliber ammunition from CCI and Speer. The CCI version was their Blazer Brass 165-grain FMJ-FN ammunition. The Speer load came from their Lawman line. This ammunition used a 155-grain TMJ-FN projectile.

Filling the 13-round magazines to capacity, I started out with some simple chronographing chores and then benched the pistol for slow-fire on paper. Results were on par with what I have come to expect from Glock pistols.

The G23 is not a benchrest pistol designed for punching paper, it’s a fighting pistol. For more dynamic practice I broke out the Rotator reactive steel target from Safe Direction. This target incorporates two 8×8-inch paddles offset at 180 degrees from one another.

During my practice session I worked with the G23 with all three backstrap set-ups. In the end I settled on the medium-width version. My hands are large, but I believe only folks with extra-large hands or long digits will truly get the most from the larger (thicker) backstrap. I also installed a new SureFire X300 on the Gen4 pistol and kept it in place for the first 100 rounds. I turned the light on and left it on deliberately to get it hot. I then fired two complete magazines in rapid succession. The pistol cycled and the light continued to burn brightly.

Final Notes
In all I put around 200 rounds of .40 caliber ammunition downrange while working with this new pistol. I did not experience any stoppage or failure issues—the pistol performed as advertised. Always keep in mind when we are discussing fighting pistols that hardware is nice. However, without the skill to employ it a gun is merely a security blanket. Whichever pistol you choose to put in your holster, proper training and mindset should go along with it. 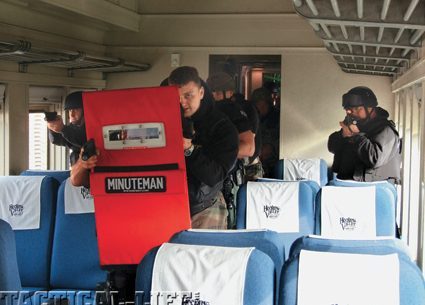