by Brian Jensen
in Uncategorized
0

0
SHARES
460
VIEWS
Share on FacebookShare on Twitter
With its longer barrel and enhanced sight radius, the G35 in .40 S&W is an ideal duty pistol with no compromises.

Everyone and their mother has an opinion on a duty weapon for patrol officers. People will argue over caliber, action type, or some other option they hold near and dear to their heart. But the proof lies in the gun carried most by law enforcement officers, and the Glock in .40 S&W fills more police holsters in the U.S. than any other pistol. It has taken the market like nothing else out there, and with the new Gen4 design it will likely remain dominant for some time to come.

The standard-sized Glock is a favorite of many, but I personally prefer something with a longer barrel and sight radius. It turns out I’m not alone, and while some officers like the 1911 style for this very reason, I wanted to stay with the same Glock platform I have carried for over 14 years. This, combined with the need for something to tame the recoil of the .40, had me looking over my fellow officer’s Glock 35. I must have made him let me look at that thing a hundred times or so before I took the plunge, but I eventually decided and tried to hunt one down.

My local “cop shop” had one handily in stock. Generally, if they don’t have the Glock I want, they can get it in short order. I ran in, put my money down, and out came the familiar black plastic case with the red label. Inside, sat a new G35, duty-ready with three magazines, and standard sights. 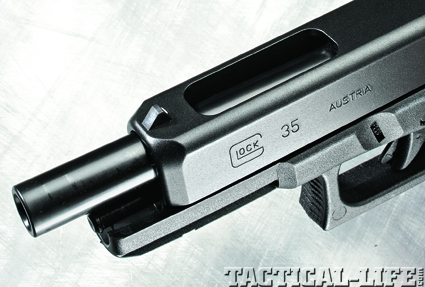 The relatively long 5.32-inch barrel allows for excellent accuracy. To reduce weight, the front of the slide has a portion of the top relieved.

The G35 has the simplicity and reliability we have come to expect from Glock, but in a longer package. With it’s 5.32-inch barrel, it is longer than a 1911 but weighs in at about 24.42 ounces empty, which is considerably less than my 1911 light rail at 39 ounces.

The longer barrel means an added sight radius, which translates into making distance shots easier. It also makes handling and coming up on target much more natural, at least for me. On top of it all, I have 15+1 rounds of .40 S&W at my disposal with the two spare magazines to give me enough firepower for anything I may encounter on the streets. If I need more than that, I’m going to start wondering why I was sent in there instead of the Marines.

Some nice points that come standard on the G35 are the extended slide stop lever and extended magazine catch. I know most range instructors will tell you the best way to send the gun back into battery once locked open is to yank the slide back after the freshly loaded magazine is inserted, but it is nice to have the option to use your thumb on that extended slide release to send the slide home. One example would be if your off-hand is disabled, or perhaps you’re holding something like a radio or flashlight.