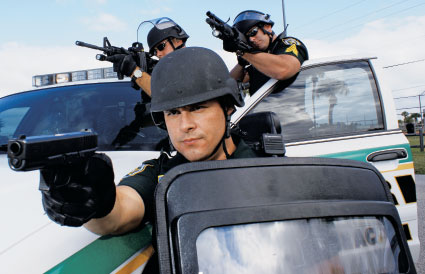 Palm Beach County lies at the top of Florida’s Gold Coast, so called because of a 16th Century Spanish plunder that washed ashore when galleons foundered off of  Florida. Palm Beach is now the home and playground of some of America’s most affluent people. The 2,033 square miles of Florida’s Palm Beach County makes it the largest county east of the Mississippi—actually bigger than Rhode Island or Delaware. Deputies from the Palm Beach County SO (Sheriff’s Office) have jurisdiction from Jupiter to Boca Raton, from the Atlantic Ocean to the center of Lake Okeechobee. As a result, PBSO uniformed personell train to be prepared for all urban, suburban, agricultural, waterborne or Everglades environment possible.

The PBSO has 3,800 employees and 4,300 volunteers who serve 37 cities and towns, the county jail, the courthouse and Palm Beach International Airport. The agency runs the county’s serology and ballistic lab, serves warrants and provides local departments information when registered sexual predators take up residence. Also under their control is the Eagle Academy School that challenges troubled teens with a tough regimen of discipline, education and fitness. PBSO Detectives assist smaller agencies with investigation of homicides, vehicular deaths, internal affairs investigations and other specialty areas.

Targeting Violent Crime
The Violent Crime Task Force that investigates and compiles intelligence on robberies and gang-related activities is based at the Sheriff’s Office. Mounted deputies patrol selected areas and provide a high-profile presence during major events, atop their well trained horses. With 26 dogs, the PBSO has the largest K-9 unit in the state, with one police dog always on duty. PBSO’s helicopters roam the county with high tech surveillance equipment such as FLIR (forward looking infrared). The marine patrol unit uses their solid-hull and rigid-hull-inflatable boats to support special operations and enforce boating regulations on the ocean, the intercostal waterway and Lake Okeechobee.

Becoming Sheriff in 2005, Palm Beach ‘s Ric Bradshaw has recently given his 1500 deputies a community-policing focus. Sgt. Mike Kletzky noted that, “the community policing focus engages the local residents to help identify criminal activity. It gives the officers the ability to resolve neighborhood problems before they be­­come dangerous.” Together with the new equipment, Sgt. Mike Kletzky noted that “Bradshaw really seems to care about the guys.” Kletzky was referring to the full set of tools now issued to every deputy to help them deal with daily tasks including use of force, both lethal and less-lethal. Each deputy no longer has to buy his or her own sidearm but is issued a Glock .40 pistol with a Safariland ALS holster. The potent .40 S&W round was chosen because of its superior performance when compared to the .38 Special and the 9mm.

Professional S.W.A.T.
The PBSO S.W.A.T. team is comprised of patrol officers that respond from all over the county when needed. Each of the 42 members has to successfully complete the tough SWAT School run by the PBSO in order to be in the elite organization. Each team member is issued a Benelli Super 90 12-gauge shotgun and the HK UMP with EOTech red dot sights. The UMP is a closed bolt, blowback-operated, magazine-fed submachine gun designed for larger cartridges and has a cyclic rate of fire of 650 rounds per minute, which is slower than its MP5 predesessor. Like the Glock, the UMP has predominantly polymer construction to reduces its cost and weight but still stands up well to wear and tear in the field while delievering the hard hitting .40 S&W round.

The reason that such firepower is re­­­quired is evident by a recent operation when the S.W.A.T. team attempted to serve a narcotics warrant. The object of the warrant barricaded himself and attempted to engage the S.W.A.T. entry team with a MAC-10 machine pistol. During the brief firefight the S.W.A.T. team used their HK UMP and Benelli Super 90 to defend themselves and others from the criminal’s automatic fire. Given no chance by the gunman to use negotiation or less-lethal alternatives, the situation was resolved by the fatal wounding of the gunman. PBSO S.W.A.T. snipers are also issued the Glock 22, the Bushmaster 5.56 carbine, the Benelli Super 90 and the excellent Accuracy International sniper rifle chambered for both the 7.62x51mm  NATO and .338 Lapua. A typical tour for the PBSO S.W.A.T. occured during a recent takedown of a half dozen houses hydroponically growing Marijuana. The S.W.A.T. teams professionally planned and executed raids on the grow houses all over the county with no shots fired and no deputies hurt. It wasn’t glamorous—but then good police work usually isn’t.

Professionalism Starts With Training
PBSO trains all their deputies at their range facility in Loxahatchee, FL. The current focus is on the transition from to the new weapons and “going back to basics.” Each deputy is issued their new Glock at the beginning of the first day and then engages in repetitive practice with lots of “dry” drills, draws from the holster, transitioning to weak hand and keyhole shooting until the staff verifies that each deputy is ready to shoot for qualification. PBSO is always looking for methods to improve training while making it more useful for patrol officers. Lt. Jeffery Swank noted that, “a FATS (firearms training simulator) will soon be in use that later on will have a driver-simulator integrated into training scenarios. A deputy will now have the ability to simulate driving to a location then being confronted with a challenge requiring a decision to use deadly force.” Brand new deputies coming out of the Palm Beach Police Academy go through an additional four- day auto pistol course just to ensure that they hit the streets with the high standards set by Ric Bradshaw and verified by the trainers at Loxahatchee.

Each deputy has the option to attend a low-light school and attends annual in-service to master the tactical use of hand-held or weapon-mounted lights. The PBSO training stresses the use of weapon-mounted lights for tactical situations only, not for incidental illumination. Weapon-mounted lasers are discouraged by PBSO officials based on the accurate corollary to Murphy’s Law that if it can fail, it will, and always at just the wrong time due to a dead battery or unexpected damage. I personally feel that laser use induces negative training because it prompts a shooter to look over or around the firearm to connect the dots instead of maintaining the same sight picture every time the weapon is presented. With multiple users, you can’t tell which dot dancing around is yours, so shot placement can be confused. Again, just my opinion.

Since 1921, 14 deputies have died in the line of duty protecting Palm Beach County. Honoring those men, Sheriff Ric Bradshaw is determined to provide the best equipment and training for his deputies who proudly wear the silver and gold on their chest as badges of honor—they are the real precious metals of the Gold Coast. 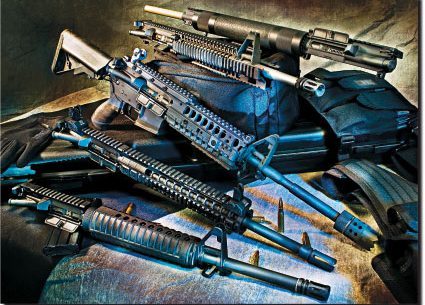 Palm Beach County lies at the top of Florida’s Gold Coast, so called because…