by Ralph Mroz
in Uncategorized
0

Vang-Comp Breaching Front End
Any shotgun used for breaching requires a standoff so as to deliver its breaching payloads effectively and to avoid plugging the barrel with blown-back debris. Most stand-offs attach to the end of the barrel, either permanently via welding, or by a screw-in arrangement. The new Vang-Comp Breaching Front-End is an ingenious device that makes you wonder why someone didn’t think of it before. It screws to the fore end of an extended magazine tube in place of the magazine cap, and provides stand-off distance, venting holes, and teeth to hold the shotgun in place while breaching. This inspired device installs in mere seconds and functions perfectly. It’s an easy way to transform a standard or cut-down shotgun into a breaching tool. 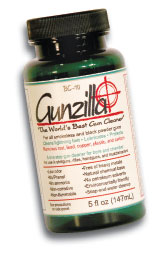 Gunzilla
While Gunzilla has been out for a few years, I hadn’t heard about it until my friend,Sergeant Mark Jacques, enthusiastically mentioned it to me. Mark is the lead firearms instructor for the University of Massachusetts police force, a 60-plus strong department that is probably one of the best trained in the state. Mark maintains an armory of over 100 weapons comprising seven different weapon systems so he’s tried just about every cleaning and lubrication product on the market, and he raves about Gunzilla.