by Rich Grassi
in Uncategorized
0

Wilderness Tactical Giles Single-Point Sling
Popular for some years, the Giles Sling from Wilderness Tactical Products was innovative and extremely well crafted. I’ve used one for a Vang-Comp Systems Remington 870 for many years. It was followed by a Giles Sling and a GO Pack 20-shot magazine carrier for the Bushmaster carbine. 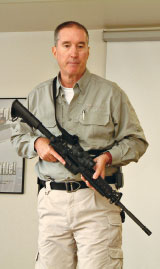 Around since 1989, I was late to the game as I came to my appreciation in the mid-1990s. During a fall trip to Gunsite, I was exposed to the Giles Single-Point Sling.

Patented by Wilderness Tactical Products and by Giles Stock, the newer Stock design has been seen on weapons used by Army, Navy, Marines and Air Force elements as well as in law enforcement. The Single-Point Sling is a globetrotter, used in hotspots around the world.