Smartphones could become the next weapon in the United States’battlefield arsenal, as defense companies seek to cash in on the rapidly growing use of sophisticated mobile applications.

Raytheon, which makes the Patriot missile defense system, is developing software which could enable a soldier to find enemies in his or her surrounding terrain using a mobile phone running Google’s Android operating system.

The software could potentially be powerful enough to pick up aerial images from an unmanned aircraft or satellite and then focus in on details such as license plates on cars or a person’s facial features.

“We’re trying to take advantage of smartphone technology to tailor for what soldiers may need in the field,” Mark Bigham, vice president for defense and civil mission solutions at Raytheon, told Reuters.

So far Raytheon have added their software to handsets made by Motorola and HTC Corp. Google has been instrumental in helping the company access and understand its Android platform, which is in aggressive competition with Apple’s iOS platform for the iPhone.

“Google has helped us push the limits of the phone,” Mr. Bigham said, adding that the U.S. internet giant would stand to financially benefit once the Raytheon Android Tactical System (RATS) is rolled out to the defense market.

The U.S. Army is a potential customer for the software and some members of U.S. Special Forces teams have tested the product and advised Raytheon, Mr. Bigham said, adding that the Indian military was also a possible huge market for Raytheon.

Each handset, which has a color touchscreen, would cost about $500, in line with prices for unlocked consumer smartphones, but Raytheon would be responsible for providing the encryption software and communications system necessary for the application to work in remote areas where signals do not exist.

Source: Golnar Motevalli for Reuters via The Globe and Mail. 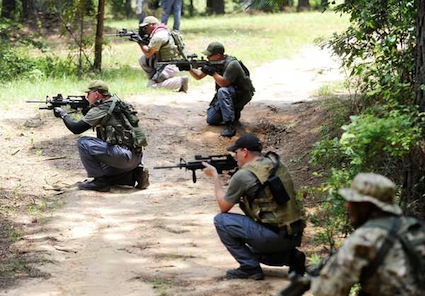 Smartphones could become the next weapon in the United States'battlefield arsenal, as defense companies…