MARINE CORPS BASE CAMP PENDLETON, Calif.  —  On any given business day an estimated 1,300 government vehicles operate on or near Camp Pendleton with the Marine Corps’ mission in mind.

“Camp Pendleton is a large, busy installation with a considerable number of government vehicles being operated on its roadways,” said Joe A. Grabman, manager, police administrative services support services division, Provost Marshal Office, Marine Corps Base Camp Pendleton. “We need every operator’s help, cooperation and adherence to traffic regulations to make this environment as safe as possible.”

Approximately 2,500 vehicles make up the busy installation’s commercial vehicle fleet excluding those used by Marine Corps Community Services, nearby installations- and the Navy.

Possible government vehicle violations range from speeding and talking on mobile phones while driving, to not wearing seatbelts. These violations are outlined by federal, state and base regulations, according to Base Order 5101.3R addressing the Disposition of Traffic Violations.

“This inappropriate behavior reflects directly on the Marine Corps,” said Samuel J. Seaman, fleet manager, Garrison Mobile Equipment, Southwest Region Fleet Transportation, Marine Corps Base Camp Pendleton. “You have to remember that a large percentage of the time there are others in the vehicle or on the road with you, and your actions affect them as well as yourself.”

From a safety standpoint, government vehicles are likely have a greater potential for causing harm or a more severe accident if one were to occur, said Grabman, who retired as a master sergeant in the Marine Corps with more than 20 years of experience in the military police force. Some Government vehicles, due to their size and mass make adherence to traffic regulations all the more important.

“These devices are installed to enhance vehicle operator safety awareness and to modify driving behaviors,” said Seaman, who has spent more than 30 years working with government transportation. “We want drivers to know we are monitoring their activity so that they will operate the vehicle in a responsible manner.”

Many senior leaders and other motorists often wonder what they can do to assist Camp Pendleton’s PMO, said Grabman. You can help by reporting suspected violations online at http://www.pendleton.usmc.mil/base/ses/pmo/violation.pdf.

Validated traffic violators are then required to appear in traffic court overseen by the base magistrate. Depending on the nature of the offense, violators may have their government vehicle or base driving privileges revoked, according to BO 5101.3R. Awarded punishments do not limit other eligible jurisdictions from prosecuting with additional charges.

This order applies to all civilians and military personnel who are permitted to drive government vehicles on Camp Pendleton and Naval Weapons Station Seal Beach, Detachment Fallbrook at any time, for any reason.

“These regulations are put in place to help maintain safe conditions,” added Seaman. “Violating these regulations puts yourself and others on the road in dangerous situations.” 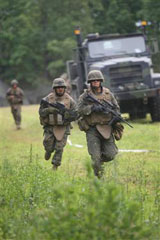 Building an FOB from the ground up

MARINE CORPS BASE CAMP PENDLETON, Calif.  —  On any given business day an estimated…