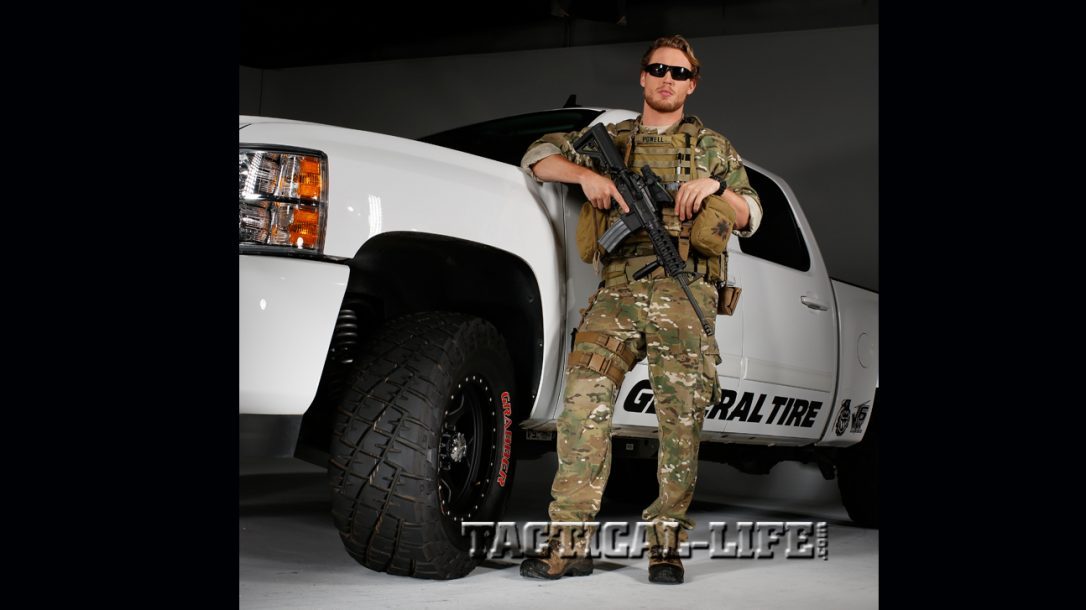 Most Americans today know about the ’66 British Invasion, when the Beatles and the Rolling Stones landed on our shores and started a musical revolution. But few remember that, in that same year, The Ballad of the Green Berets topped the charts for five weeks and was 1966’s No. 1 single. This writer remembers it well, and the 45 RPM single still sits prominently among his collection of vintage vinyl. And when John Wayne starred as the Hollywood version of a Special Forces commander in Vietnam, he forever established the Green Beret soldier as an American icon.
Epitomizing the modern soldier is Grady Powell, a five-year veteran of the Green Berets. Since getting out of the Army last year, Powell keeps busy. He’s the head weapons instructor for Asymmetric Solutions USA and a spokesman for General Tire. His tough-as-nails persona and movie star looks won him a role in the show Stars Earn Stripes. Teaming up with celebrity Eve Torres, they won the overall competition.

MY FIRST GUN: It was a Marlin .22 bolt-action rifle. You can’t beat a .22 long rifle. Basically, you shoot it for free. I paid $100 for it and got it from my buddy. It still has the cruddy paint job that was on it when
I got it. The paint covers up the scope,
so I don’t even know what brand it is.

MY MENTOR: I can’t really say I had a mentor growing up. My instructors through the Bravo course were very influential. Since then, Chris Kyle, he was a very good friend. He taught me patience. He had a whole hell of a lot of patience.

SHOOTING SCHEDULE: I shoot every week. Now, I’m an instructor in Potosi, Missouri, training people to shoot at Asymmetric Solutions USA. There are a lot of people buying guns these days because it’s a cool thing to do, so I’m training people to know how to handle firearms. My father is buying a lot of guns, too, and I told him “I’ll teach you how to be proficient will all of them, but you’ve got to leave them to me in your will.” I gave my girlfriend a Glock 19, and I take her shooting every weekend.

FAVORITE SHOOTING: I used to be big on speed target shooting, but I don’t see the point of that any more. I like dynamic shooting, through houses. That’s practical. You’re not going to get too far shooting standing in a static position. The other day I took a bunch of IDPA guys shooting and they did real good at stationary targets. Then I took them through a house, and their groups were measured in feet.

INFLUENCES: Firearms in general. As far as security goes, I always carry concealed. Shooting is stress relief. In my house, there are weapons placed strategically throughout.

GREATEST SHOT: When I was on my team (in the Army), we would do long-range training. I’d have to say hitting steel at 1,500 yards with a .300 Win Mag. I had never done anything like that before.
IF I ONLY HAD ONE: That’s hard. I‘ve got to be honest: I love my Marlin .22 bolt action. If there were zombies attacking us, then it would be an AR variant.

ADVICE FOR A YOUNGER YOU: You’re doing it exactly right. I’m just kidding. Have a lot of patience. Anybody can charge through situations and find their way out, but take your time and think your way through and save yourself a lot of heartache.

IN ANOTHER LIFE: “If I had not entered the military, what would my occupation be today,” is a good question. I was born with the military in my blood. My father was in Special Forces. If I hadn’t gone in the Army, I would probably be a graphic designer. That was my major in college. I guess that I would be a troubled artist. I got a full scholarship ROTC at Mizzou.

BIGGEST ADVENTURE: When I got out of the military, I backpacked through Europe for a while. I slowed down and took things one day at a time. It helped. Life is too damn short to take it too fast. We get one shot at life, and I want to do it right.

MY CHOICE OF FOXHOLE PARTNER:
Chris Kyle, because we wouldn’t stop laughing. Everybody knows he wouldn’t miss. It would be wonderful to spend just one more day with him. 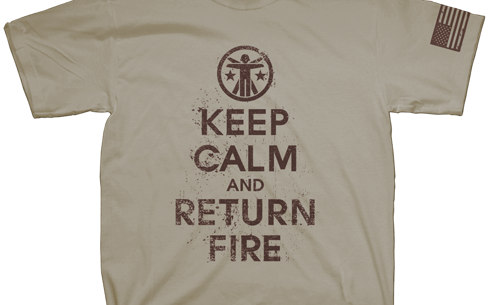 Most Americans today know about the ’66 British Invasion, when the Beatles and the…