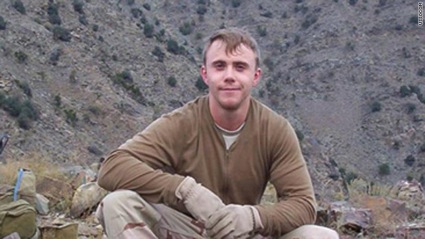 Staff Sgt. Robert Miller was killed in 2008 while taking fire from Taliban insurgents to protect his team, the Army says. Photo CNN.

President Barack Obama will award the nation’s highest military honor to a Green Beret who died after willingly taking fire to protect U.S. and Afghan soldiers.

Staff Sgt. Robert J. Miller, killed on January 25, 2008. will be the seventh service member to receive the Medal of Honor during operations in Iraq and Afghanistan, The Army said. He fended off fire from Taliban insurgents to allow his team to fall back to a safe position. The battle took place in the village of Barikowt, near the Pakistani border.

“We were fish in a barrel,” said Sgt. James Odyga, Miller’s commander in Afghanistan. “Enemy on right, on the left. Robby immediately started firing.”

By “exposing his position repeatedly, he drew fire from more than 100 enemy fighters,” and saved the lives of his fellow Green Berets and 15 Afghan soldiers, the Army said.

Miller’s parents take consolation that their son gave his life so that others could live.

“If it wasn’t for Robert’s actions, they could have easily been killed,” said his mother, Maureen Miller.
Said Miller’s father, Philip: “We have a sense of awe and amazement of what he did and a feeling of pride.”
The Army commendation notes the young man’s character.

“Only 24 years old, Miller impressed everyone on his team. Although the youngest member of A Company, 3rd Battalion, 3rd Special Forces Group (Airborne), Fort Bragg, N.C., he quickly earned a reputation for taking on difficult challenges,” the Army said.

Staff Sgt. Robert Miller was killed in 2008 while taking fire from Taliban insurgents…