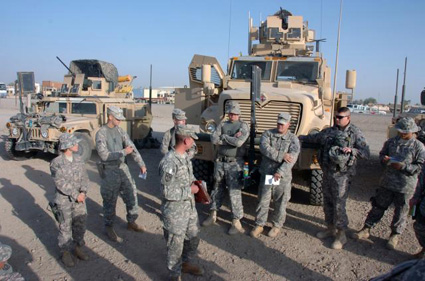 ARLINGTON, Va. (Oct. 26, 2009) — National Guard equipment will be returned from Iraq to the United States and Guard units can fill shortages with equipment currently in use in Iraq, Defense officials told Congress members Oct. 21.

“Reserve-component equipment will not be used as a source for Iraqi security forces requirements,” Undersecretary of Defense for Policy Michele Flournoy told a House Armed Services Committee hearing on redeployment. “In fact, reserve units serving in Iraq are being offered the opportunity to take theater-provided equipment back to their home station to fill any authorized shortages.”

More than 143,000 troops were serving on the ground in Iraq in January, the committee heard – fewer than 120,000 are there now; plans call for 11 combat brigades totaling about 100,000 personnel at the end of the year.

“In August 2010, our combat mission in Iraq will end and our military presence … will consist of six, advise-and-assist brigades, with about 50,000 American military personnel,” Rep. Ike Skelton said. “Assuming this phase of the redeployment goes smoothly, we will slowly withdraw the remaining brigades until … there are no U.S. military personnel on Jan. 1, 2012.”

Some 3.3 million pieces of equipment are in Iraq. Some of that equipment is scheduled to be given and/or sold to the Iraqi security forces. Members of the House Armed Services Committee have expressed concern that National Guard equipment that is needed for domestic missions not be left behind.

Lt. Gen. Kathleen Gainey, director of logistics on the Joint Staff, told the committee that the National Guard Bureau is one institution she’s working with as she oversees the process of equipping the ISF.

“We were able to arrive at a previously stated recommendation … for sourcing Iraqi security forces without having to expend National Guard … equipment,” Gainey testified. “National Guard … units currently serving in Iraq have the opportunity to take theater-provided equipment back to their home station to fill any authorized shortages.”

Rep. Gene Taylor, who represents Mississippi, said that one of his state’s National Guard units that had returned from Iraq had only 60 percent of its equipment to use when Hurricane Katrina hit. He asked if equipment currently in Iraq will be made available to state and local agencies.

Acting Deputy Undersecretary of Defense for Logistics and Materiel Radiness Alan Estevez said that agencies will be able to request surplus equipment from Iraq.

“The National Guard and Army Reserve and all forces reserve have performed incredibly well,” Gainey said. “They are truly part of the total force. … They will redeploy with their equipment that is there. … All of the services are working very hard to continually review the requirements for our National Guard and Reserve units to look at what are their shortfalls and to identify if there is any equipment that is currently in Iraq that could be used to fill their shortages.” 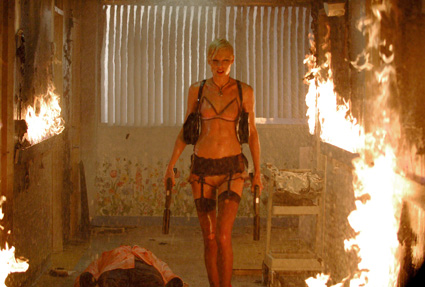