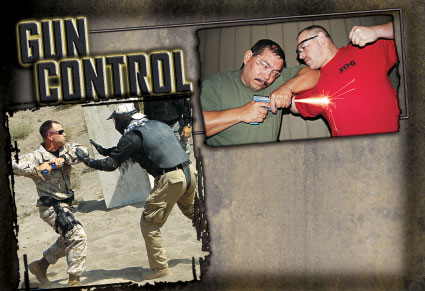 Don Gulla will tell you that getting your handgun out and on target is sometimes the hardest part of an armed confrontation. 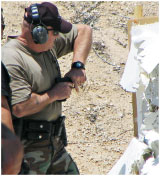 The veteran S.W.A.T. officer and Master Defensive Tactics Instructor and founder of the no-nonsense LE mixed martial art of “Arrestling,” also knows that because you do what you practice, most police officers, let alone civilian shooters, aren’t as well prepared as they need to be for a gun-struggle scenario.

“In those critical moments knowing how to hold on to your handgun is just as important as knowing how to use it,” he explained during an Officer Safety seminar in Seattle, WA. “You can’t let your opponent strip it away and use it against you.”

Because Gulla subscribes to the belief that action not only speaks louder than words but that a hands-on demonstration cranks up the volume, he invited a burly volunteer from the seminar participants to put it to the test.
“I want you to protect your handgun,” he told the volunteer, who nodded his response and took an FI (Field Interrogation) stance for the traditional weapons retention method.

“Ready?” Gulla asked and the volunteer nodded again. In short time Gulla stripped his opponent of his handgun and not only surprised the man in the process but genuinely shocked more than a few participants who were watching on as well.
“As you can see, the natural reaction of officers when a suspect is trying to grab their duty weapon is to grab the handle of their gun and push it back down into the holster,” he said back to the audience.

“One of the biggest problems in defensive tactics today is that officers are still doing weapon retention katas (martial forms) in a mixed martial arts age. They seldom, if ever, practice against someone who is really trying to take their weapon, and quickly find out that holding on to their handgun is harder than they think,” he added to a now less-than-skeptical group.

The G-WRAPS System
To emphasize the point, Gulla then invited the officer to go after his holstered handgun while the four-time Gold medal winner in the World Police and Fire Games in the martial arts employed the G-WRAPS (for Gulla’s Weapon Retention and Positional Shooting) technique.

The officer, a former college wrestler, quickly took Gulla to the ground only to discover that the Master Defensive Instructor had not only protected his handgun, but managed to effectively bring it back up and around the back of the wrestler’s head.
“Bang!” said Gulla as the wrestler released what he thought was a good hold, smiled and swore.

The man’s reaction is a standard one for seminar attendees. Most weapons retention training seldom goes beyond the theoretical. Since 1990, the 49-year-old Gulla and his Arrestling cadre have been successfully demonstrating the G-WRAP
method against all comers. The driving force behind the handgun retention method and practical seminars isn’t about ego or coming up with the latest martial art flash: It is about what works and what can save lives.

“Six percent of law enforcement officers who die in the line of duty are killed when their own handguns are ripped away and used against them,” he said, telling the seminar attendees that in one 18-month period, three officers in Washington State were shot and killed after being disarmed.

“As a member of the critical incident debriefing team in one of those deaths I had the dismal task of having to inform the officer’s wife and daughters of what had happened,” he added solemnly. “It’s not something I want to do again.” Gulla said that it was those violent encounters and others that told him that there had to be a better and more practical method of handgun retention. And whatever it was it needed to be more realistic and effective in both defensive tactics training situations and the street.

Joining the Master DT Instructor in the pursuit was Police Sergeant Jim Detrick who well understood the importance of finding a better method of training for sudden, violent encounters. Off-duty and in a restaurant, Detrick’s attention was drawn to a disturbance at the counter where a belligerent customer was threatening a waitress. When Detrick stepped in to try to calm the man down, the man pulled a handgun and fired.

Detrick was hit in the stomach but managed to grab the handgun. In the difficult fight that followed he was shot four more times before he disarmed the attacker, who was then taken into custody.

The long recovery process and serious contemplation about defensive tactics training programs brought him to Gulla and the search for a better system. Other concerned officers, deputies, and state troopers who had been in other sudden violent street situations soon followed.

What came out of studying such dangerous encounters and more than a little sweat-based training formed the foundation for Arrestling’s 12 principal core techniques.

The G-WRAPS System
G-WRAPS is the 12th core technique that was adapted and modified from the WRAP system that some S.W.A.T. officers had relied on in such dangerous encounters in the past.

“One drawback we found with it was that officers had a tendency to stab at an attacker in ‘close’ situations, which threw the handgun out of battery both for real and in training,” said Gulla. “So we worked at it until we came up with something that would work for the average officer and not just those of us with martial arts backgrounds.”

To make this point, Gulla pitted a large male officer to take on a much smaller female officer with the same outcome and result. Once those on the training mat had an opportunity to become familiar with the concept, Gulla and his cadre moved them on to another important aspect of sudden violent confrontations.

This is where the positional shooting portion of the training takes place. After a series of drills with practice red guns the attendees move on to an outdoor Simunition phase. From the Simunition phase, Gulla takes the participants through a live fire on the range to drill the procedure home.

“Because most people are brainwashed by the movies, many believe that once you pull the trigger, the problem is gone. It doesn’t always work that way nor is the fight over if you get shot.” 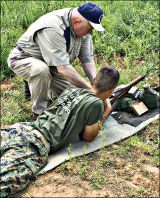 The Father of USMC Sniping