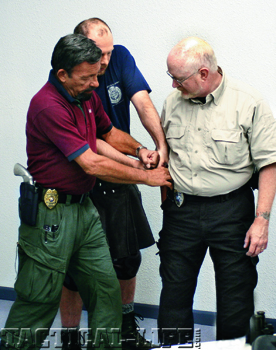 A  well-trained officer will have been taught to retain his weapon when a criminal is trying to snatch it from his hand or holster. But what does that officer do when he sees another officer being disarmed? Four actual cases below show the options, and the terribly high stakes.

Case One, September 2009, in the Midwest. Two investigators from the district attorney’s office are transporting a career criminal shackled with cuffs and leg irons when he manages to snatch one investigator’s pistol from its holster. At gunpoint, the second investigator is forced to surrender his weapon and unlock the restraints. Stealing their guns and one lawman’s clothing, the felon escapes and remains at large for some time before being recaptured. Already humiliated by the incident, the two detectives are relieved of armed enforcement duties pending complete investigation of the incident, but at least neither one has been shot.

Deadly Grab
Case Two, shortly prior to Case One above, in a bordering heartland state. Two uniformed officers respond to a domestic dispute.  Unexpectedly, a male subject suddenly appears and throws a flaming rag onto the male cop’s head, and then grabs the service pistol out of his holster. He shoots and kills the disarmed officer and then engages in a gunfight with the female officer who, though wounded, valiantly returns fire and kills the cop-killer. One good officer tragically slain, and another seriously wounded, but she has managed to stop what would very likely have been a series of further killings.

The snatching of the good guys’ guns by the bad guys, with homicidal results, has been a concern for as long as police have been armed. Modern security holsters designed by such brilliant experts as Bill Rogers have done much to mitigate this, and so has the splendid handgun retention training pioneered by Jim Lindell for the Kansas City Regional Police Academy, and still spearheaded by Jim and his current training organization, the National
Law Enforcement Training Center in Kansas City, Missouri.

Traditionally police handgun retention training has focused on teaching the officer what to do when his or her weapon was under attack. We cannot overlook the importance of teaching our personnel what to do when another officer’s weapon is the subject of the deadly snatch attempt. 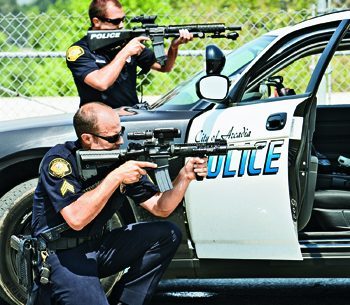 Setting Up a Patrol Rifle