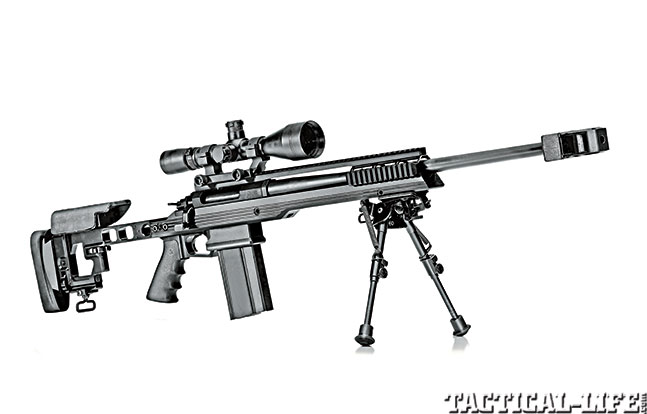 1 of 4
Gun Review: Armalite 7.62 AR-31
The AR-31, chambered for 7.62mm NATO/.308 ammo, has proven to be a serious player in the precision bolt gun market. With a well-thought-out design, it is sure to be a popular law enforcement rifle. Shown with a Leupold Mark 4 LR/T scope and a Harris bipod. 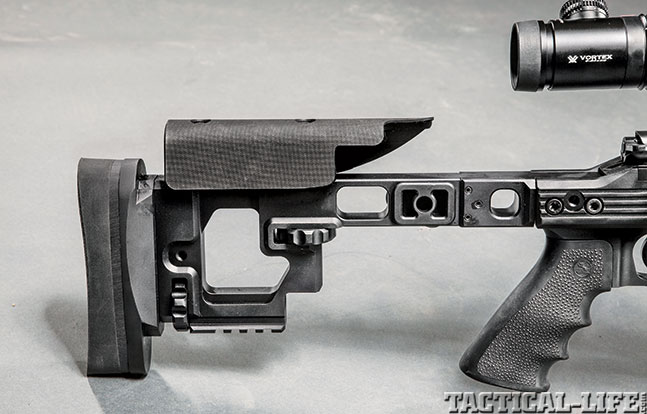 2 of 4
Gun Review: Armalite 7.62 AR-31
The AR-31’s skeletonized buttstock is adjustable for both length of pull and cheek height. Also note the large buttpad and bottom Picatinny rail. 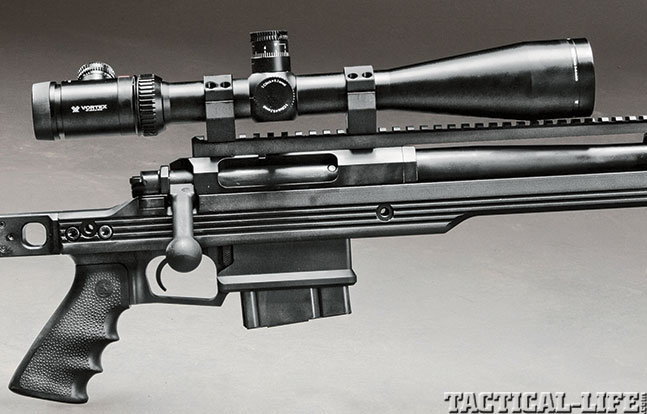 3 of 4
Gun Review: Armalite 7.62 AR-31
With its smooth, solid bolt action and double-lapped precision barrel, the AR-31 proved to be exceptionally accurate on the range. 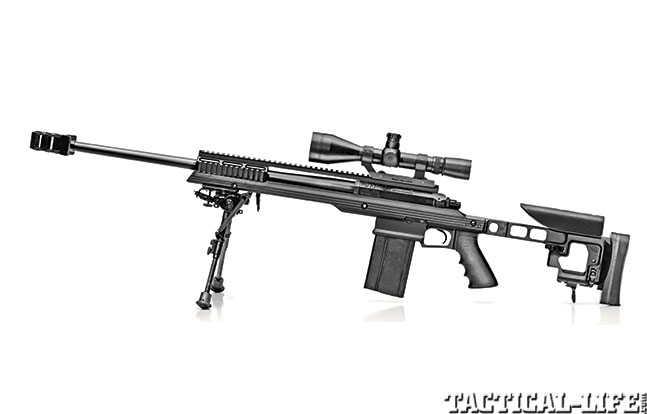 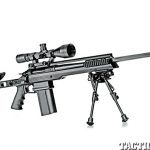 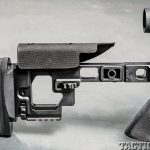 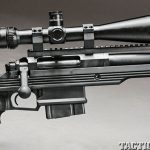 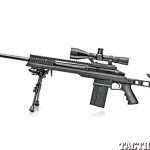 Armalite has been in the rifle business since the 1950s and a major player in the bolt-action precision rifle world for over a decade.  The Armalite AR-31 is the most recent addition to the company’s precision rifle family. Following in the steps of the successful AR-30 and AR-50, the new kid on the block does not disappoint. Chambered in the much more cost-friendly .308 Winchester/7.62mm NATO, it is a reliable short-action bolt rifle that will certainly catch the eye of law enforcement and civilian marksmen.

The rifle is available with either an 18- or 24-inch barrel, and I received the former for testing. It comes with what could be called a space-age-looking stock system. The buttstock offers a wide range of adjustments. The cheekpiece can be raised an inch, and the length of pull can be adjusted from 13 to 15 inches. The buttstock is one of the best I have come across. The easy-to-turn adjustment wheels are designed with a ball detent. This is a helpful addition that keeps the wheels from turning due to recoil or long shooting sessions. The cheekpiece is unique in that it is covered with mildly padded, non-slip nylon material. At the range, this proved to be helpful in eliminating any slippage while getting a cheekweld. Additionally, the buttstock has pre-threaded attachment points for sling swivel studs and a Picatinny rail bottom to attach other sling swivels or a monopod.

On top of the chassis is a continuous, 20-MOA Picatinny rail that will allow shooters to get out to longer ranges. Measuring a full 18 inches long, the top rail is also a perfect fit for law enforcement officers who may need to mount night vision or other targeting enhancements on the rifle. The forend also comes complete with Picatinny side rails for mounting lights and other required devices.

The rifle is obviously built for serious shooting. It features an 18-inch, double-lapped, chrome-moly barrel that is capped with a highly effective muzzle brake, and the barrel is threaded so users can install other accessories. The AR-31’s octagonal action is nestled firmly in Armalite’s patented V-block receiver system. The AR-31’s bolt utilizes a floating bolt-head design to ensure the lugs always maintain even contact with the action, further helping with accuracy. Weighing in at 14 pounds unloaded—and about 16 pounds with a scope and ammo—the rifle is not something that makes you think of long hikes. There are benefits, however, but more on that later.

One feature that I really enjoy is the fact that the rifle runs standard AR-10B magazines. This gives operators the ability to run 5-, 10- and even 25-round magazines. Along that same line of thought, it is notable that the magazine release is indexed along the side of the magazine well—the same as you would find on the AR-10 or any AR-15-style rifle. While some may argue the pros and cons of such placement, I found it to be comfortable and easy to run.

The safety on the rifle sports a stiff, 180-degree flip at the back of the bolt—a unique design that will take time to master. The trigger is mechanically clean with a crisp break.

For the range, I outfitted the AR-31 with a Harris bipod and a Vortex PST 6-24x50mm FFP scope with an EBR-1 MRAD reticle. Mounted in Vortex rings, the PST would prove to be a great piece of glass for the rifle.

After a brief sight-in period, it was time to start shooting groups. The AR-31 did not disappoint. Since I was looking to measure the AR-31 as a law enforcement rifle, I stuck with 168-grain match ammo for the test. Being the most common round found in the law enforcement community, it seemed appropriate to run it like most officers would. I gathered three solid choices for ammo and ran them side-by-side: Federal’s 168-grain Gold Medal Match, Black Hills’ 168-grain Match HPBT and Hornady’s 168-grain BTHP Match.

To measure the AR-31’s accuracy, I fired five-shot groups at 100 yards from a stable prone position using the Harris bipod and a sandbag at the rear. The weather was standard Arizona fare—sunny and warm. Being early in the day, there was no wind whatsoever, which was helpful for gathering data. Firing groups, it quickly became apparent that the AR-31 liked the Federal Gold Medal Match ammo. My best group came in at just 0.3 inches, and the rounds were essentially stacked on top of each other. What’s more, the results of the Hornady and Black Hills ammo were both slightly under 0.5 inches each as well. After the hard data was recorded, it was time to push the targets out and start punching steel at greater distances. From 100 to 800 yards, the gun was easy to run and held its exceptional accuracy. The clarity of the Vortex glass made shooting at distance a pleasure. Ignoring a few obvious mistakes made by the shooter, the rifle performed as a tack driver.

On the functioning side of things, the gun ran flawlessly. The weight of the gun became an asset, as the recoil was minimal, allowing for faster follow-up shots on target. One unique aspect of the gun that the bolt will hold open after a magazine is empty, similar to what we see on AR rifles. It took some getting used to. While the ejection port is ample in size, the locking made single-round feeding a bit of a wrestling match. While it may be helpful in eliminating running the bolt home on an empty chamber, it presents some interesting training challenges.

The AR-31 is a fantastic rifle, and it’s one that law enforcement agencies and civilian shooting competitors should consider. With an easy-to-manipulate, 18-inch, threaded threaded barrel, it can truly work well in tight spaces. Easily accessorized with a sound suppressor, optics, night vision and/or thermal gear, it is a solid platform for any agency. Add to that exceptional accuracy, and the AR-31 may be one of the best rifles that has hit the market in some time. 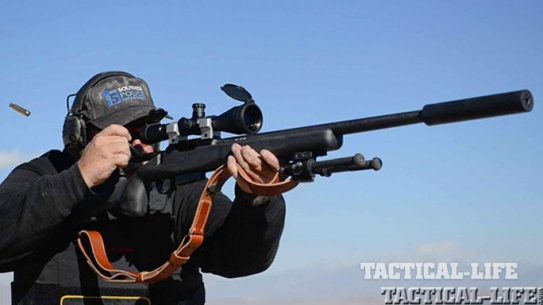 The new TFM, or Tactical Force Multiplier, lives up to its name with a...