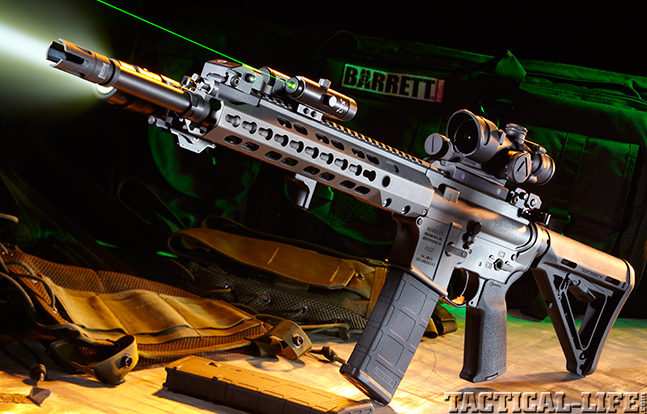 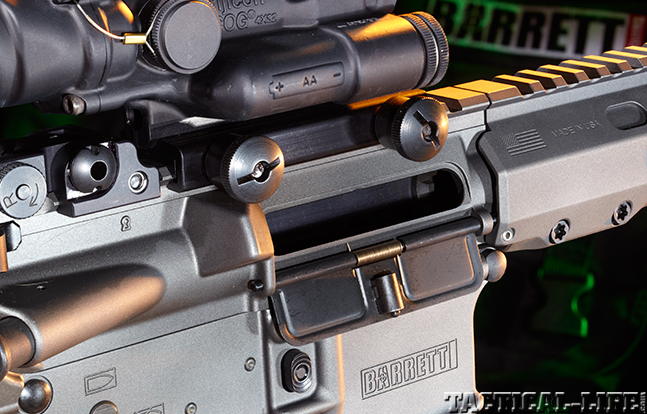 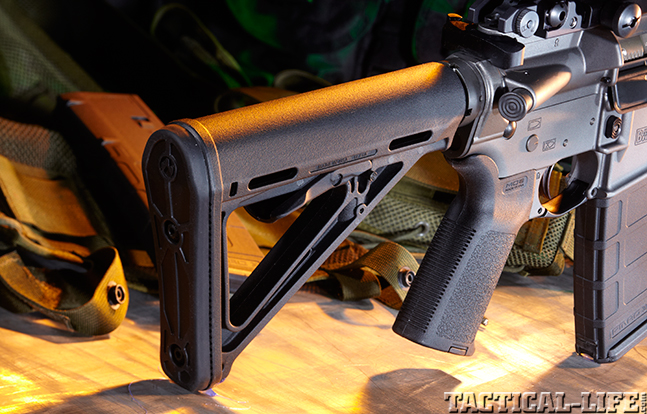 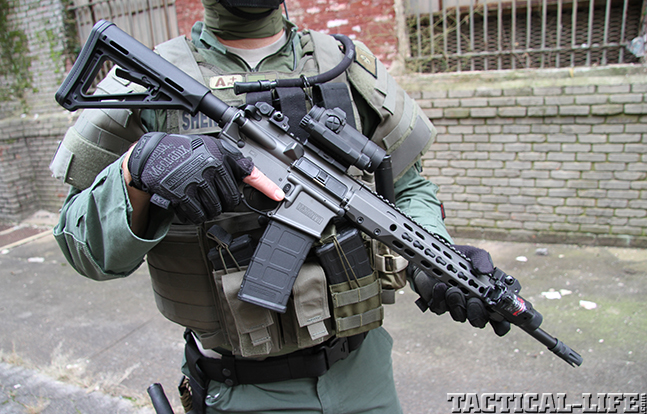 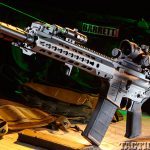 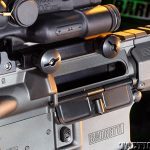 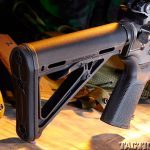 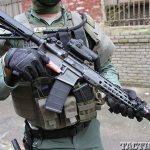 Barrett has been well known among police and military precision rifle-shooters for years. Its .50 BMG rifles remain popular for those taking them into harm’s way. Barrett’s M82A1 forever altered the heavy sniper rifle, bringing a simple, robust and operator-friendly .50 BMG to soldiers in the field. As terrorism continues to escalate, many police agencies have acquired the same platform. Later designs, including single-shot and box-fed bolt rifles, have brought Barrett to the civilian market. The introduction of the MRAD in 2011 took the intermediate precision rifle market by storm. Starting with the .338 Lapua Magnum, it is easily one of the most popular magnum precision bolt rifles on the market—especially within the police world. What many don’t seem to know is that Barrett also builds fine AR-platform rifles, including one of the first in 6.8 SPC.

In 2007, Barrett introduced the REC7 (Reliability Enhanced Carbine, 2007) chambered in 6.8 SPC. It was one of the first short-stroke-piston-driven carbines in this caliber. Barrett’s first attempt was the M468, which used a standard direct gas impingement operating system, and it was replaced by the REC7 and its piston-driven system. Designed originally as an upper receiver that could be easily attached to existing military lowers, it was built to military specifications and standards. Everything Barrett makes is rugged and built for use in the harshest conditions. Chambered in 6.8 SPC, the REC7 offered increased range and firepower. Barrett built its own magazines, too, to ensure proper functioning. Designed to carry 30 rounds and made from steel with a metal follower, these remain the best mil-spec 6.8 SPC magazines I have ever used.

Over the years, the REC7 has been improved and offered as a personal-defense weapon (PDW) chambered in both 6.8 SPC and 5.56mm NATO. My early REC7 remains one of the most reliable in my inventory, and I’ve tested the PDW in 5.56mm, which upheld Barrett’s standards of quality, reliability and operation. Barrett avoided the AR frenzy of the past few years, staying focused on its precision rifle platforms. The company waited to introduce a high-quality AR, and the new REC7 Gen II is just that.

Talking to Bryan James, Barrett’s vice president of marketing and sales, this rifle was designed to be of the highest quality and “not just another AR.” In keeping with Barrett’s philosophy, it had to be rugged, reliable and able to go to work almost immediately. Along with top-notch parts from proven companies, the new REC7 Gen II would include some innovation from Barrett. Built with the modern operator in mind, it would feel equally at home in the hands of a police officer or on the battlefield. Handling one of the first production models, it’s clear that those goals have been met. 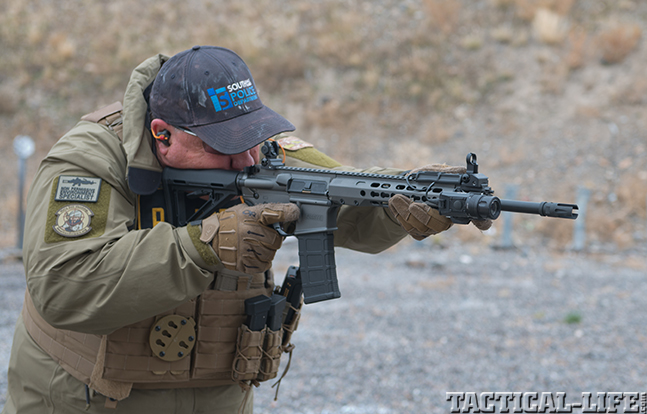 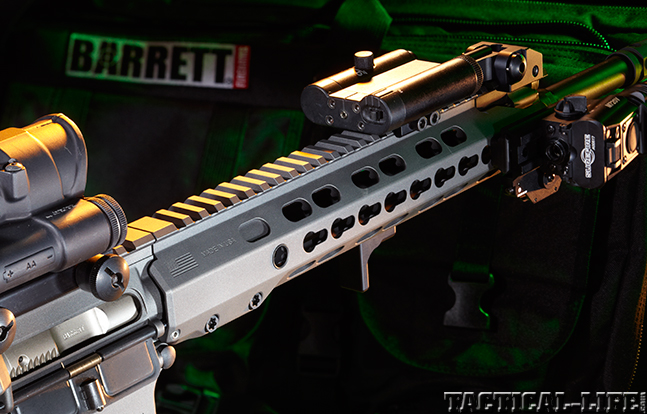 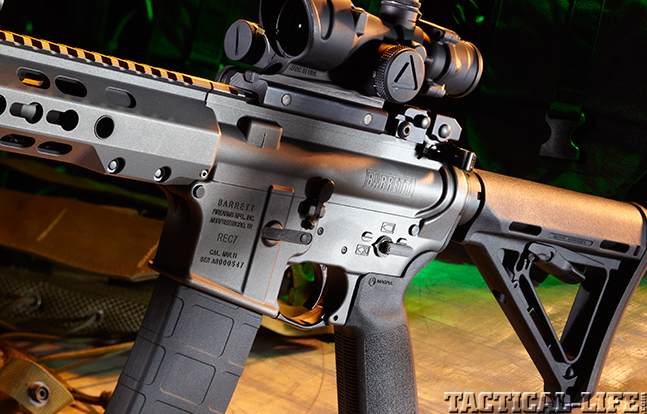 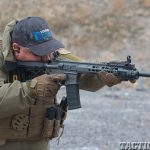 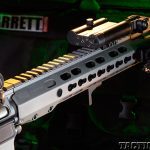 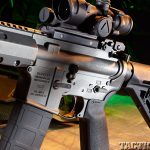 I’ve tested dozens of rifles over the years, so I usually meet marketing hyperbole with a bit of skepticism. Sure, it’s a marketing director’s job to sell their products; my job is to be open minded, impartial to brands and practical in testing. When this new REC7 arrived, it was immediately evident that James was not kidding—the REC7 Gen II is a nice rifle, one of the nicest out-of-the-box AR rifles out there.

Handling the REC7 Gen II, the first thing I noticed was how smooth it feels. Barrett designed and builds the new Gen II handguard in-house. It uses the now-prolific “KeyMod” system, allowing you to add rails and accessories as needed. The handguard is octagonal and narrow, providing a comfortable handhold, with a flat bottom where it attaches to the upper receiver. A continuous top rail offers plenty of real estate for sights and optics. The remaining surface is smooth with no sharp edges, making it very comfortable to hold. Key-slot holes are in the 3, 6 and 9 o’clock positions. Sling-cup slots sit at the rear on both sides. Inserts protect the aluminum, which is a really nice touch.

The new handguard covers a Barrett-built, 1-in-7-inch-twist, chrome-lined, hammer-forged, medium-contour barrel chambered in 5.56mm NATO with M4 feed ramps for reliability. Primary Weapons Systems’ Triad flash suppressor caps the barrel, making it immediately suitable for LE duty use. A large nut threaded to the barrel holds the three-position gas block in place. With no pins or screws to come loose, the gas block can be removed using standard tools. A bullet can be used to adjust the gas system, with positions for standard firing, suppressed and disassembly.

Forged from 7075 aluminum, the upper receiver houses Barrett’s high-strength 9310 steel bolt and purpose-built bolt carrier. Built from one piece of steel, there is no gas key to come loose or break. Coated for smooth operation, it uses an anti-tilt design. A BCM Gunfighter charging handle also comes standard. Precision Reflex flip-up sights sit atop the upper receiver and forend, providing some of the best iron sights on the market.

Also forged from 7075 aluminum, the lower contains mil-spec internals along with a Geissele Automatics Super Semi-Automatic (SSA) two-stage trigger. A semi-automatic version of Geissele’s Super Select-Fire trigger, it may be the most field-proven two-stage AR trigger available. Mapgul’s MOE pistol grip and triggerguard are also equipped, providing solid control and allowing for glove use. The six-position buffer tube holds a Magpul MOE buttstock. One short Picatinny rail for the KeyMod handguard was provided, along with two Magpul Gen 2 polymer magazines.

Finally we have the rifle’s finish. The entire rifle is coated in a nice grey Cerakote. Rather than shop it out or apply it improperly, Barrett built a state-of-the-art facility to apply and bake it correctly. Factory-trained Cerakote professionals even came out and assisted in the setup and provided proper training. The effort paid off, as I’ve never seen a better factory-applied finish. 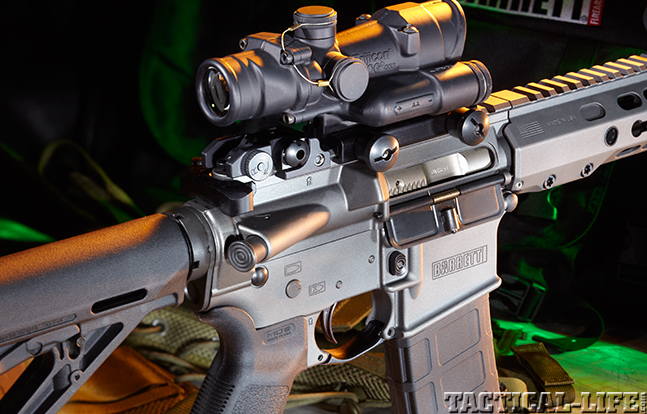 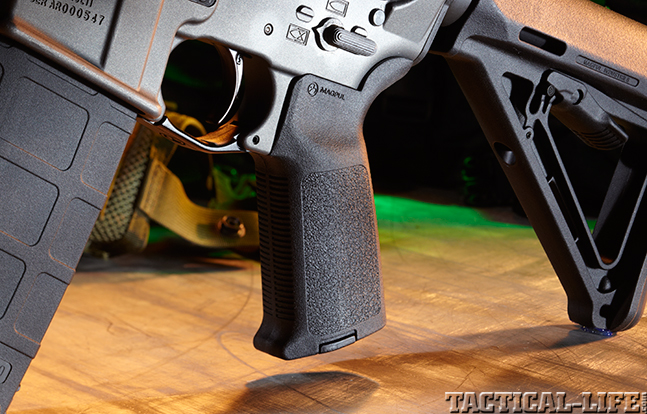 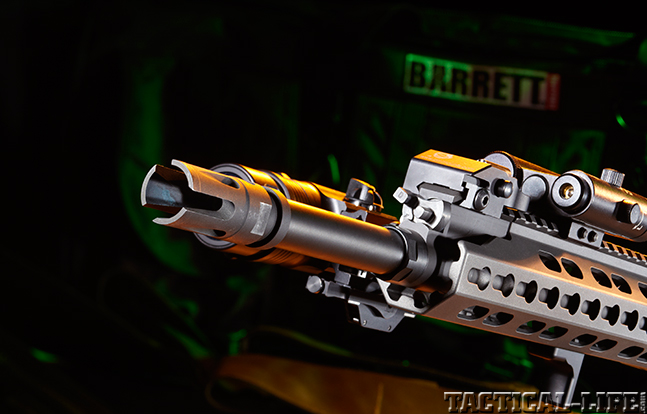 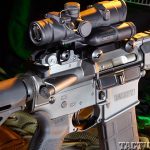 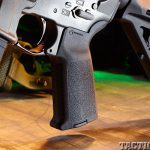 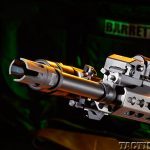 I kept the performance evaluation for this rifle simple—the same way an officer or working professional may use it. Precision Reflex’s backup sights are, in my opinion, among the most user-friendly sights on the market. A complete circle covering the front post makes for very fast CQB operation. Centering the front circle in the rear aperture keeps things fast and easy to see. The majority of officers will use iron sights on the gun, so I tested the REC7 Gen II the same way.

I attached a few different lights to the rail, including a Streamlight TLR-1, a SureFire X300 Ultra, as well as the top-notch SureFire M720V with both white and IR illumination. I also used my Blue Force Vickers sling and an Impact Weapons Mount-N-Slot Hand Stop for solid off-hand control.

I shot the REC7 from prone using a railroad tie as a front rest—about as “real world” as it gets. Optics and red dots are great, but most officers don’t have them. Shooting at round targets (typical in the real world), these Precision Reflex sights are excellent, allowing for solid aiming and consistent holds. With the 1-in-7-inch twist rate, the 77-grain bullets were the most accurate, although not by much. Silver State’s 77-grain OTM ammunition produced the best group at 1.75 inches, with Hornady’s 75-grain match a close second. DoubleTap’s 55-grain FMJ BT ammunition grouped at just under 2 inches. Nothing grouped outside 2 inches; given real-world testing without optics, the REC7 is about as accurate as you can shoot an AR. It was also consistent, something that is not always true with piston-driven AR rifles.

Shooting from kneeling at 50 yards, the REC7 was well balanced and maintained superb accuracy. Sporting a heavier barrel, you might expect the carbine to be heavy, but that’s not the case at all. It rested nicely and balanced perfectly in my hand, allowing for solid accuracy from a braced kneeling position. Hits on a 6-inch steel target at a bit over 100 yards from kneeling were almost too easy.

Barrett has tuned this rifle perfectly; it barely moves while making fast repeat shots. The PWS Triad flash suppressor offers some muzzle control, making it an excellent choice for duty rifles. Working around my truck, barricades and other barriers at 25 yards, it provided excellent control, even on rapid fire. The Precision Reflex sights lock in place, making them useful in almost any position, even the most field expedient. The REC7 Gen II was very accurate and repeatable—it should prove useful for traffic stops, working perimeters or any situation involving typical police ranges.

Operating the REC7 Gen II in a shoothouse, its superior balance was especially clear. It pointed quickly and worked around corners well. Short barrels are handy if this is all you do, but a 16-inch barrel is more than manageable—the REC7 was no exception. Barrett equips the rifle with an H2 buffer, and it is one of the softest-shooting piston-driven ARs I’ve ever tested. Just to be sure, I tested a couple of my other piston guns side by side, and it took the day. It even rivaled my custom-tuned direct impingement rifle. Its balance, coupled with the Geissele trigger, Triad flash suppressor and smooth operation, made for accurate, rapid fire. The REC7 just did not move; it was almost like shooting with a competition muzzle brake but without the annoying noise and debilitating overpressure.

Barrett was looking to avoid “just another AR,” and the REC7 certainly accomplishes that goal. To make sure it wasn’t just me, I gave several officers the chance to handle and shoot this rifle. One officer stated, “It just kind of melts in your hands.” They all commented on its “perfect balance.” A good friend, new to guns and rifles in particular, said, “You can just feel the quality in this rifle. There is some serious attention to detail here.” That pretty much says it all.

Sure, it’s an AR, which isn’t earth-shatteringly new, but it’s built to Barrett’s standards with incredible attention to detail. This was done without adding bells, whistles and gadgets—just solid and proven components. While I have tested a few factory rifles that match the quality of this rifle, none have been better. The build quality comes very close to my hand-built custom rifles.

If you are looking to buy one AR you can take on duty that will last a lifetime, the Barrett REC7 Gen II is a solid choice. One thing is for sure: It will be hard to send this one back! 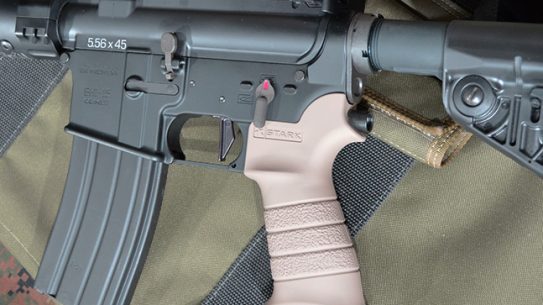 The SE-2 ANG pistol grip and its integrated ambidextrous sling mount is available in... 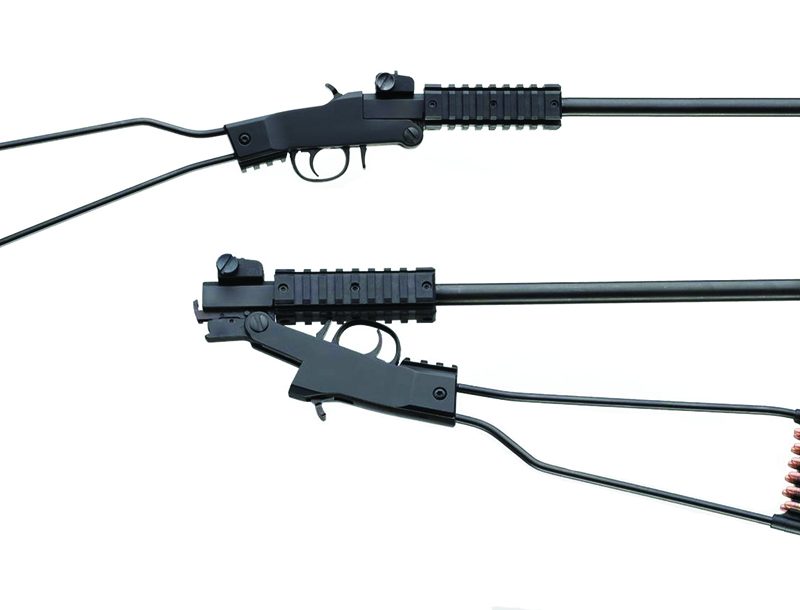