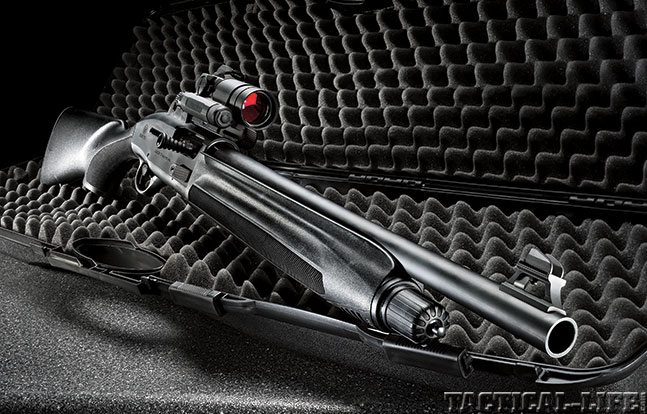 1 of 6
Gun Review: Beretta 1301 Tactical 12 Gauge
The 1301 Tactical’s controls, including the safety, bolt release and charging handle, are enlarged and easy to use with gloves. 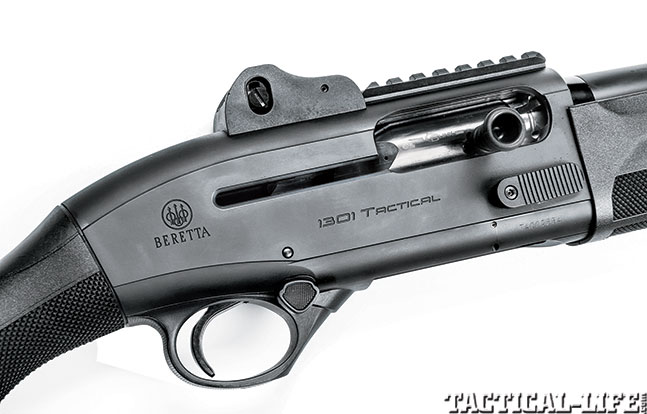 2 of 6
Gun Review: Beretta 1301 Tactical 12 Gauge
The 1301 Tactical’s controls, including the safety, bolt release and charging handle, are enlarged and easy to use with gloves.

3 of 6
Gun Review: Beretta 1301 Tactical 12 Gauge
The receiver is made of aluminum for the perfect balance of light weight and durability, while the forend is checkered for enhanced control. 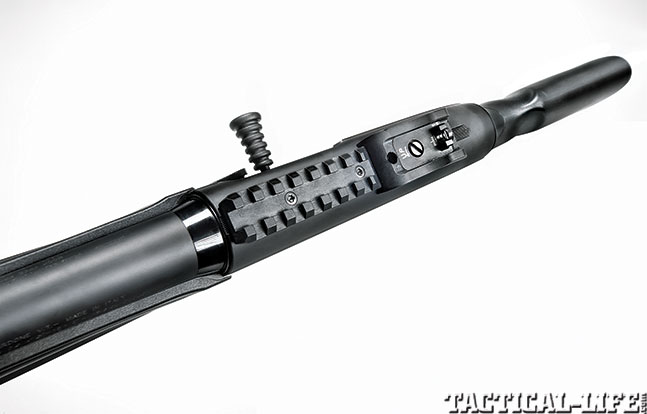 4 of 6
Gun Review: Beretta 1301 Tactical 12 Gauge
The top of the receiver features a Picatinny rail for mounting sights, as well as a ghost-ring rear aperture for fast targeting. 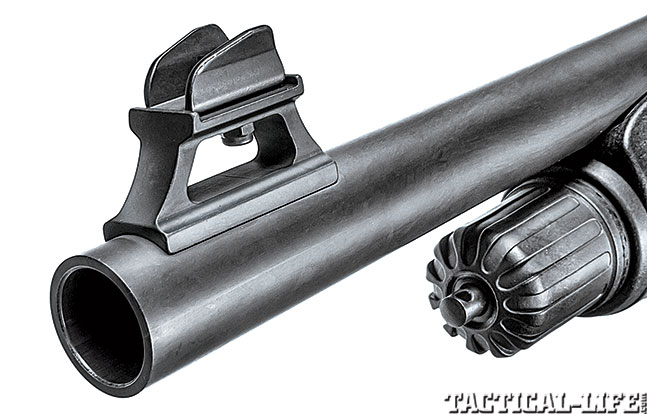 5 of 6
Gun Review: Beretta 1301 Tactical 12 Gauge
Beretta has lowered the 1301 Tactical’s front sight from its predecessor, the TX4. This makes getting a good cheekweld easy and instinctive.The barrel features a fixed cylinder choke for duty use. 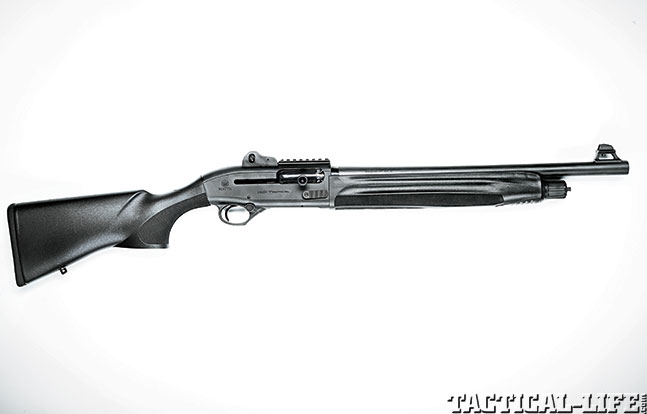 6 of 6
Gun Review: Beretta 1301 Tactical 12 Gauge
The 1301 Tactical’s controls, including the safety, bolt release and charging handle, are enlarged and easy to use with gloves. 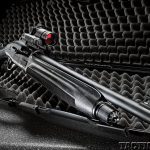 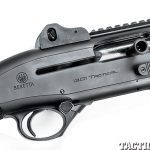 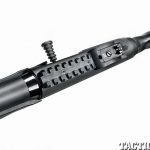 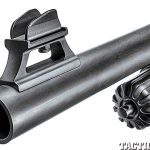 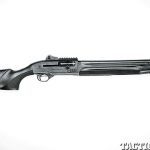 A couple years ago, my agency decided to look into replacing its pump-action shotguns with semi-automatics. The guns, Remington 870s, were decades old. However, they were, and still are, 100-percent reliable. I have trusted them with my life on countless raids, arrests and enforcement operations. They cycle every type of shell, and I can literally count on one hand the number of times I have seen one break, which is special considering I have seen tens of thousands of shells sent downrange with them. The 870s are also fantastically versatile and easily configured with lights, shell carriers, sights and stocks. The feature we wanted that the 870 didn’t provide was being semi-automatic.

“Starting from a low-ready position … I was able to get four shots off in under a second—0.91 seconds to be exact.”

Because we are a large agency and would purchase more than 1,000 guns, a lot of companies were interested in winning our business. Three major manufacturers sent us semi-auto shotguns to try out and determine which features would be most important in our selection. A lot of people put a lot of shells through these guns for months before we all compared notes. Here is what we learned: Everything comes second to reliability. It has to go bang every time you pull the trigger. We appreciated a lot of different features, but nothing trumped the ability to cycle any shell we put in it.

Police shotguns simply need to cycle 00 buckshot and slugs, right? Wrong. They need to cycle 00 buckshot and slugs in the field. They also need to cycle birdshot for training. Slugs and buckshot can be expensive. They also tend to be punishing on the shooter. Virtually every police agency uses light birdshot shells for training on the range. When we tested the shotguns from those three manufacturers, they all proved reliable with 1-ounce slugs and 00 buckshot. However, some had problems cycling birdshot, and they all had problems cycling reduced-recoil buckshot. In fact, some jammed almost 50 percent of the time with those shells. I had saved up my money to buy whichever shotgun we chose. In the end, I didn’t buy any of them.

At the same time that we were doing the testing, I acquired a Beretta A400 Xcel shotgun for my wife to shoot sporting clays. I was amazed by it. It cycled faster than my Beretta 391 and had zero malfunctions with any shells we ran through it. It utilized what was called the “Blink” rotating-bolt gas operating system, and I was more impressed with it than any of our test shotguns. I was thrilled when I found out that Beretta had a tactical shotgun called the TX4 that used the same Blink system. I bought one and was amazed. It cycled everything, including slugs, buckshot, reduced-recoil buckshot and birdshot. The few times it has ever failed to cycle were shooter induced. It became clear that the folks at Beretta realized the versatility and amazing dependability of the Blink operating system in a shotgun and have now introduced it in the Beretta 1301 Tactical.

The 1301 Tactical has a short 18-inch barrel, a fixed choke and ghost ring sights. I looked closely and found a few improvements from the old TX4. The 1301 Tactical has aggressive stippling in the stock and forend to help with handling under stress, when your hands are sweaty, bloody or the gun gets wet. The oversized safety is also larger on the new 1301. The ghost-ring iron sights sit slightly lower on the 1301 than the TX4, which makes it much easier to get a good cheekweld. Best of all, a large, tactical charging handle and a large, paddle bolt release come standard, right from the factory. On my old TX4, I had to buy these as aftermarket parts. Getting them standard saves about $100.

The 1301 Tactical has a fixed choke that is bored out to 0.73 inches (or “cylinder”). This is very important on any tactical shotgun. If you put any choke more restrictive than cylinder, you risk splitting the barrel when slugs are shot out of it. Also, tactical shooters are not in the habit of changing or checking their chokes. I have seen more than one barrel ruined when a choke got loose and eventually fell out without the shooter ever knowing. The accuracy dropped off and the internal choke threads were ruined before the shooter realized what had happened.

At the heart of the gun is the Blink operating system. First introduced on Beretta’s A400 Xtreme, Beretta says it is 36 percent faster than any other shotgun operating system. It has a rotating bolt, similar to an AR rifle and many Benelli shotguns. I already knew the Blink system was utterly reliable from running it on personally owned shotguns, but I had never checked its speed. I couldn’t wait to put it up against the shot timer. But first, I wanted to check its performance capabilities.

After breaking the 1301 Tactical down and lightly lubricating it, I headed to the range and set up a target at 25 yards. With no bench, I decided to shoot five Federal 1-ounce rifled slugs from a prone position with an MTM K-Zone shooting rest for support to check the shotgun’s accuracy. I quickly learned two things: First, your clavicle, commonly called the collarbone, takes 100 percent of the abuse when shooting a 12 gauge while prone. It hurt enough that I shot the rest of my groups while sitting. Secondly I learned that the 1301 Tactical is plenty accurate. The sights were a little off initially, but all five holes from the slugs were touching—pretty impressive for a smoothbore weapon.

“I patterned 10 shots and was amazed at how little felt recoil came from the 1301 Tactical.”

From there I moved on to patterning with 00 buckshot. My first choice was Remington’s 8-pellet Reduced Recoil 00 buckshot, a common round carried by law enforcement throughout the U.S. I patterned 10 shots and was amazed at how little felt recoil came from the 1301 Tactical. I had dug through my closet of ammo and found some Italian buckshot from Clever Mirage. I thought it was fitting to shoot Italian shells out of an Italian shotgun. The recoil was only slightly more, but the patterns opened up considerably. In my experience, most tactical shotguns have a specific brand of 00 buckshot that will pattern far better than the rest.

After patterning was done, it was time to put the 1301 Tactical through its paces. I practiced loading and firing both with and without gloves. I also practiced transitioning between targets and shooting while moving, both right- and left-handed. For most of these drills, I used 7½ birdshot. The shotgun pointed and swung easily. Weighing a mere 6.3 pounds empty, it weighs about the same as an empty, barebones M4 rifle. The Blink gas operating system sucked up recoil and made it far faster and easier to shoot than a lot of heavier tactical shotguns that I have trained with in the past.

Finally, it was time to dig out the shot timer and put Beretta’s claims to the test. Starting from a low-ready position, by the third try I was able to get four shots off in under a second—0.91 seconds to be exact. On the fourth try, I got four shells off in 0.98 seconds, and all of them were on target from 7 yards. I switched from birdshot to 00 buckshot and did it again, getting 0.98 seconds again, with every pellet on the target. I started checking my split times to see just how fast I could get consecutive shells off. I started at 0.24 seconds and soon got down to 0.2 seconds. I doubt I could keep five shells on target in one second, but the 1301 Tactical cycles fast enough that it is possible. These are the kinds of times that I typically get when trying to race with my Glock. I never dreamed I could do it with a 12-gauge shotgun.

Throughout the testing I had zero malfunctions. This is pretty impressive for a brand-new shotgun that did not get a break-in period. I did have a few loading errors where I failed to push the shell far enough into the magazine tube and it sprang back on the shell carrier. The gun will still fire and cycle, but it makes it impossible to load any more shells into the magazine tube. I quickly learned to be more assertive when loading. I have pinched my thumbnail repeatedly on semi-auto shell carriers (or lift gates as they are sometimes called) that have a large, round opening at the end. I have almost had my thumbnail torn off enough times that I will not buy a shotgun that does this. Thankfully, the shell carrier of the 1301 Tactical seems pretty snag-proof. I tried to catch my thumb in it and could not.

As someone who has carried and tested a lot of different tactical shotguns, I know what I like and I know what works. The number one feature should always be reliability. The Beretta 1301 Tactical proved that it was 100-percent reliable with every shell I threw at it. On top of that, it handled like a dream. If you are looking for a new tactical shotgun, pick up the new Beretta 1301 Tactical and compare it to everyone else. I have and, if given the choice, this is what I would be carrying today. 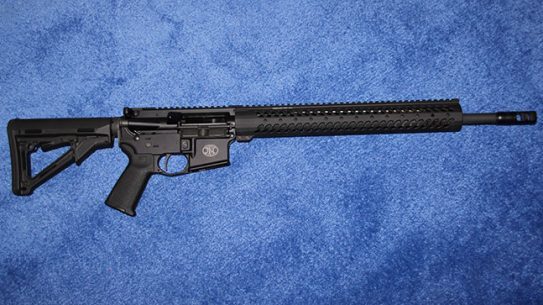 FNH USA has set its sights on the the tactical and competition markets with...