by Massad Ayoob
in Guns, Handguns
0

The newest offering from Beretta is its 92G Brigadier Tactical pistol, but it’s a good bet that it will become known as the Wilson Combat model. That’s because Bill Wilson of Wilson Combat convinced Beretta to manufacture it, and it incorporates many of his innovations and suggestions.

The Brigadier Tactical comes on the heels of the recent announcement that Wilson Combat, a company whose signature gun has always been the 1911, would be offering customization packages on customers’ Beretta 92 (9mm) and 96 (.40 S&W) handguns. It has generated a lot of interest among the many fans of this iconic design. I expect those fans to be placing advance orders, as each gun will literally be “one of 1,000,” with only four production runs of 250 guns being offered initially. All will be in the 9mm 92 format.

To those of us who have known Bill Wilson a long time, “Mr. 1911’s” appreciation of the Beretta 92 has never been a secret. Bill Wilson has stated publicly that you couldn’t beat a 92 for reliability in an out-of-the-box, semi-automatic pistol. A co-founder of the International Defensive Pistol Association, Bill Wilson shot a 92 in the very first IDPA Invitational, and also in the 1997 IDPA National Championships, where he earned Second Place Master in the Stock Service Pistol division. “It has always been my choice of all the ‘wonder nines’ and still is,” Bill Wilson told me recently.

He added, “I’ve been interested in the Beretta 92 platform ever since Jack Robbins told me about their reliability and accuracy back in the 1980s. More recently, I have become quite a Beretta collector and probably have the largest collection of 92/96 model pistols of anyone outside the Beretta family. While I still love my 1911s and shoot them a lot, I also shoot B92s a lot, too.”

How did this particular collaboration come together? According to Wilson, “A good friend of mine who used to be on the Beretta shooting team, Will Fennell, and I were talking and I was telling how I had an idea for the perfect B92. I’ve always felt that the 92G SD was as near a perfect 92 as Beretta has ever produced, just too rare and expensive to shoot, and I wanted to do an ‘enhanced’ 92G SD. Since he’s also a big 92 fan, I went over my idea with him and he got excited enough to ask if I wanted him to see if he could get any interest from the factory.”

The idea caught on at Beretta, and the project snowballed from there. The “92G” denotes the decocker-only style of this pistol, with the thumb lever spring-loaded so the pistol immediately returns to firing condition instead of staying on “safe” if the lever is left down, as it does on the more common 92F, 92FS and M9 series. The SD variation, produced from only 2001 through 2005, incorporated a light rail and the Brigadier slide, which was built for extreme durability. The “SD” designation stood for “Special Duty.”

The new pistol has the integral light rail on the dust cover of the frame, of course, which means it’s unlikely to fit holsters for standard 92/96 pistols. The next most obvious change, in addition to the rising silhouette of the Brigadier slide partway down the pistol, is the shortened barrel. At 4.7 inches, it just looks better to many shooters, and it is also counter-bored at the muzzle to protect the barrel’s crown and preserve accuracy.

Beretta armorers and aficionados have long put the “D-series” mainspring from the double-action-only (DAO) models into traditional double-action/single-action (DA/SA) 92s like this one, to lighten the trigger pull. It worked then, it works now, and it is part and parcel of the new Wilson-influenced Brigadier Tactical.

The sleek, skeletonized hammer from the late, lamented Beretta Elite series is also part of this new pistol. And, according to Beretta, so are its “extra-tight-fitting tolerances for improved accuracy.” The grip frame is factory checkered, front and back. The magazine well is effectively beveled for faster loading and reloading. The pistol includes three of the improved, gray, “sand-resistant” magazines refined from lessons learned in our nation’s most recent military conflicts. And then, of course, there are the Wilson components.

Wilson Combat provides its excellent Battlesight, with its big U-shaped notch, at the rear and a dovetailed front post. Both are driftable for windage adjustments. There is also a Trijicon night sight module up front. The front edge of the rear sight allows a wounded shooter to catch his or her belt or holster at that spot to rack the slide one-handed.

A Wilson Combat steel, fluted guide rod is part of the package. So is Beretta’s oversized (but not too oversized) magazine release. The WC motif is rounded out with the Wilson Combat logo engraved at the rear of the slide and in a medallion on the G10 grips. Additionally, every serial number will have a “WC” prefix.

Each gun, as I understand it, will be inspected by Wilson Combat before shipping to make sure its action is as smooth as a factory-produced pistol’s can be. 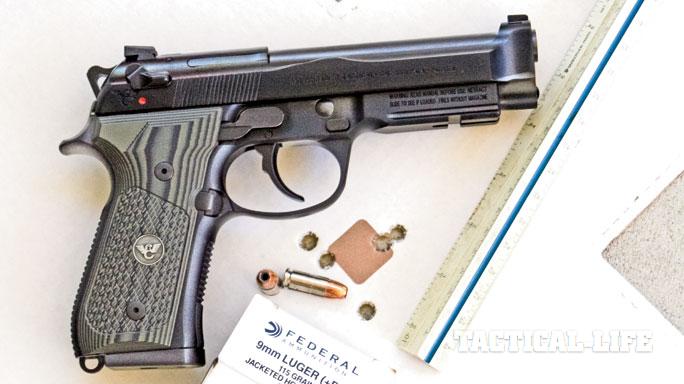 Bill Wilson told me one reason he liked the Brigadier slide was that he felt it reduced recoil. I shot the test gun next to a standard Beretta 92FS, with the same ammo; the “kick” did indeed feel a wee bit less. When things are serious, of course, every “wee bit” helps. There was a tradeoff, though: The calipers showed that the Brigadier slide on the test pistol was 29.54mm wide, compared to 28.79mm on the standard 92, which was just enough difference to cause fit problems with some rigid Kydex holsters. If you get this gun, order a holster that accommodates a Brigadier slide and an SD-style railed frame.

Trigger pull, I’m told, is tested by Wilson Combat staff. It was certainly smooth on the test pistol. Measuring from the center of the trigger, where the finger normally lies when actually shooting, pull weight averaged 9.2 pounds in DA, with a smooth, consistent stroke that allowed the desirable “surprise break.” The SA pull weight averaged 4.97 pounds. There was a very slight, palpable roll that let the shooter know it was about to break, and when it did, it broke cleanly. These are good “street” trigger pulls, and conducive to good shot placement.

I benched the new Wilson-influenced Beretta at 25 yards from a Caldwell Matrix rest, using three proven ammo brands that also represent the three most popular 9mm bullet weights. Each group was measured twice, center-to-center of the farthest flung bullet holes, to the nearest 0.05 inches. The first measurement (all five shots) gauged what an experienced shooter might expect from a very solid position in calm conditions. The second measurement (the best three hits) has been proven to factor out unnoticed human error to approximate what most shooters could expect for all five shots (same ammunition, same gun) from a machine rest.

Federal 9BPLE 115-grain +P+ JHPs have been street-proven for decades. DeKalb County, Georgia, cops relied on it out of standard Beretta 92Gs for many years, as did Illinois state troopers out of shorter-barreled Smith & Wesson designs. The test Beretta plunked five shots into 1.55 inches and its best three into 1.25 inches.

Black Hills’ 124-grain, standard-velocity JHPs are so accurate that military teams have issued them to their members who are shooting Beretta M9s in the President’s Hundred and distinguished events like the NRA’s National Pistol Championships at Camp Perry. In this Beretta, the Black Hills load punched a 2.3-inch group that might have suffered from an unnoticed shooter error, because the other four shots were within 1.25 inches and the best three were clustered in a mere 0.75 inches.

Remington UMC 147-grain FMJs are a subsonic training round that I’ve seen win IDPA matches. In this test, the load garnered a very evenly distributed group out of the Beretta, with a 2.25-inch five-shot measurement, and 2.2 inches for the best three shots.

In terms of pure handling, the Wilson-influenced Beretta got a unanimous thumbs-up from all testers. Retired U.S. Army Special Forces Command Sergeant Major Ray Millican has used the Beretta M9 for more serious purposes than most of us, and he fell in love with this pistol. In rapid fire, he planted everything in a palm-sized group. Five-Gun IDPA Master John Strayer was similarly impressed when he shot it. I ran the test Beretta over a 60-shot course designed for armed citizens and off-duty cops. Those sixty shots included one-hand-only shooting with either hand and rapid reloads from distances of 4 to 15 yards. The test Beretta put all the hits in the center zone in a 5.12-inch group, 0.25 inches tighter than a $3,000 custom 9mm 1911 by another maker that I shot over the same course on the same afternoon. Several shooters put hundreds of rounds through this pistol, and reliability proved to be 100 percent. 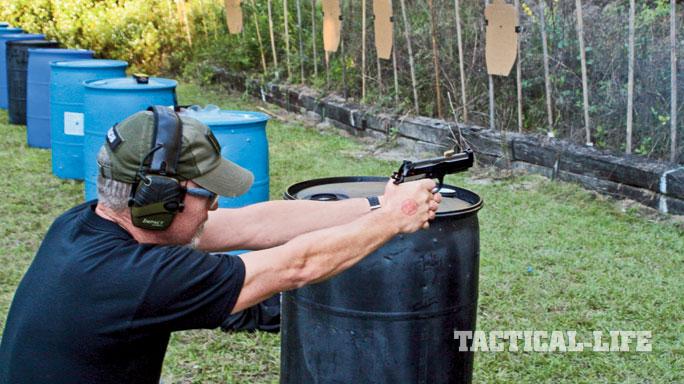 At $1,195, available exclusively from Wilson Combat, the shooter can have a new version of a gun going for the same price as a decade-old, used 92G SD pistol, but with fresh night sights, a sweeter trigger and Wilson Combat goodies installed. When Wilson Combat announced early in 2014 that master Beretta-tuner Ernest Langdon, who won many major championships with the 92 in combat shooting, had trained the Wilson staff to do action jobs and customization work, it revitalized the 92 in the eyes of today’s combat shooters. The new Brigadier Tactical from Beretta and Wilson Combat will undoubtedly do the same. Suffice to say, I sent a check rather than the gun back to Wilson’s shop.