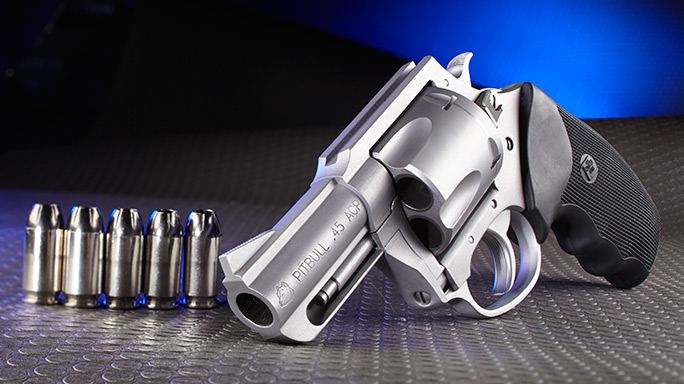 Photo by Steve Woods
Because of its unique design, the Pitbull would serve as a perfect backup to your everyday-carry .45 ACP semi-auto.
Comment(s)

1 of 6
Photo by Steve Woods
Gun Review: Charter Arms Pitbull .45 Revolver
Because of its unique design, the Pitbull would serve as a perfect backup to your everyday-carry .45 ACP semi-auto. 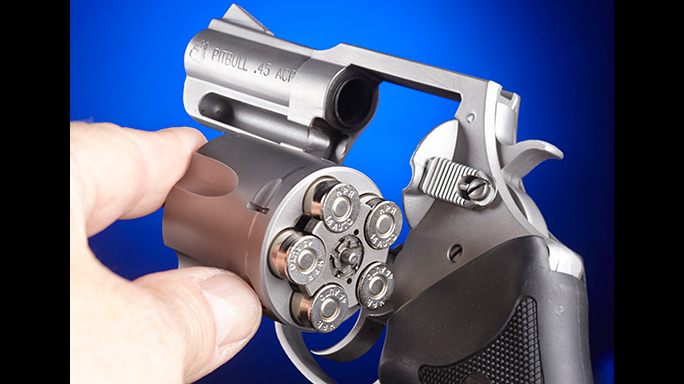 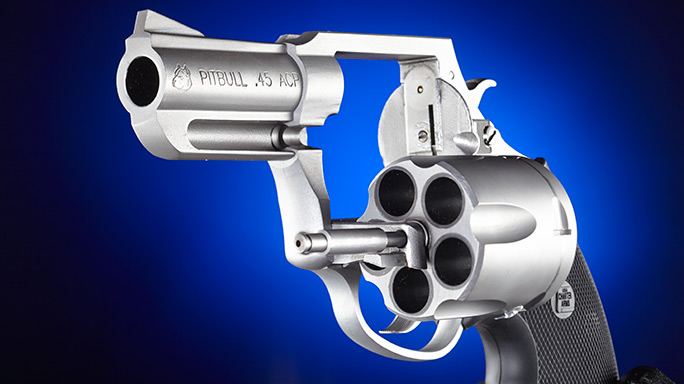 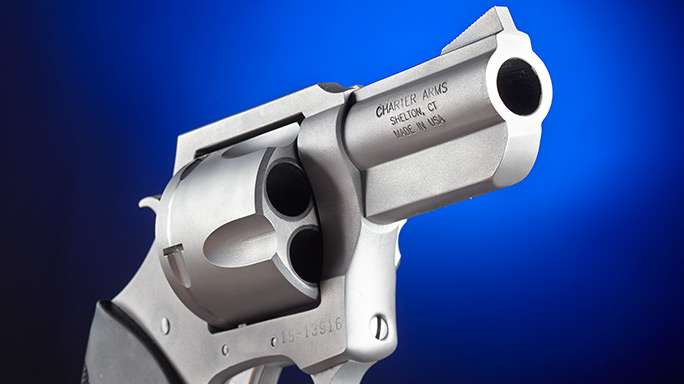 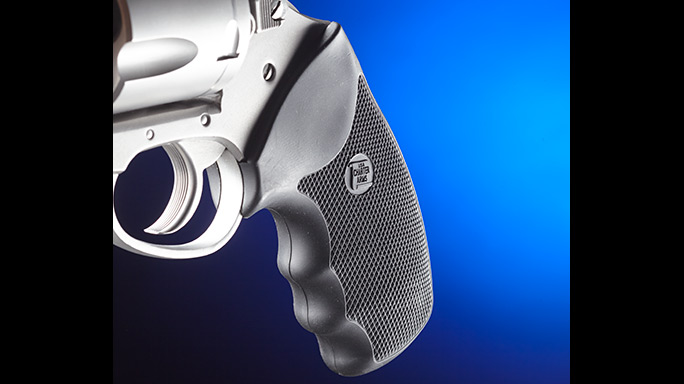 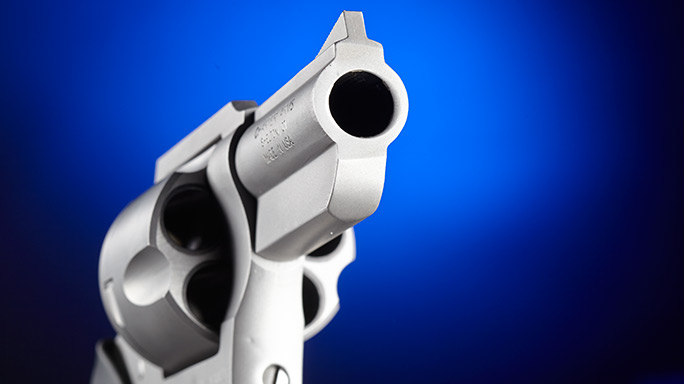 6 of 6
Photo by Steve Woods
Gun Review: Charter Arms Pitbull .45 Revolver
Because of its unique design, the Pitbull would serve as a perfect backup to your everyday-carry .45 ACP semi-auto. 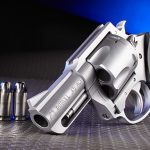 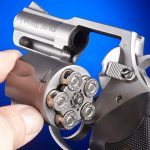 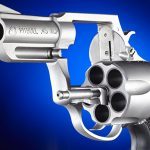 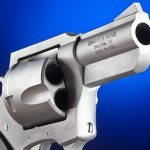 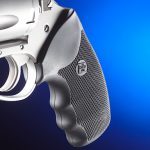 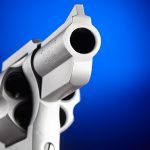 My first experience with Charter Arms began in the mid-1980s. Larry Deaton desperately wanted a Remington 722 in .244 Remington I owned and began working on me to acquire it. Eventually, Larry got my Remington and I walked away with $200 and a Charter Arms Undercover. That little revolver became my constant companion, riding in my locked glove box in the years before North Carolina had a concealed-carry law, and later in my kit bag in a soft Brauer inside-the-waistband (IWB) holster after. It traveled hundreds of thousands of miles, going for an accidental swim twice, and never skipped a beat. It killed snakes, a groundhog and numerous short-range flies on a bet. It’s still in the family, as my son-in-law keeps it in his truck now.

When I married my wife, Cherie, she got her concealed-carry permit and fell in love with a Charter Arms Pink Lady. She still carries it most of the time. We bobbed the hammer to make it easier to extract from a purse and added a Crimson Trace Lasergrip. It’s the darling of our CCH certification classes when we lay out guns for students to try after qualification. I also use a Pathfinder for training, and a Bulldog sleeps in a lockbox beside the bed. I suppose it would be hard to say that I’m totally without prejudgment concerning Charter Arms, as I’ve never had a bad experience with its guns.

I also happen to be a major advocate for revolvers for concealed carry since they come as close to being totally reliable firearms as you can get. In my nearly 50 years of shooting pistols, I’ve only experienced a handful of malfunctions from revolvers, and have only had a few semi-autos that never malfunctioned when subjected to really high round counts. Revolvers are simple and require no training for handling malfunctions other than the practice of simply pulling the trigger again when the gun fails to fire due to a dud round.

The .45 ACP Charter Arms Pitbull is a whole new frame size, a necessary upgrade because of the larger round and the revolver’s rimless ejection system. Most revolvers that fire rimless cartridges are either single action (SA) or require the use of moon clips. Charter, however, has designed a spring-loaded ejection system that allows normal chambering and ejecting rimless rounds.

The system works by using a spring-loaded plunger bar at the inside edge of each chamber. As the rounds are loaded into the cylinder, the bar snaps into the extractor groove of the cartridge and on ejection they simply slide out. There is a bit more resistance in loading rounds into the chamber, but by pushing them straight in or slightly inward it’s minor.

When I picked the gun up at my dealer, the owner asked me to give him a report on how the .45 Pitbull loads and ejects, and I can report it does just fine. I would like to see just a bit more ejector stroke, since I do the ejection stroke with the muzzle vertical and I worried that sometimes a case might get hung up between the ejector and the frame. Having said this, the Pitbull’s ejector worked as well as it does with rimmed cases. During testing, I intentionally found some rounds that would provide sticky extraction, requiring a firm bump on the rod, but they came out as if they were rimmed cases.

The cylinder on the Pitbull .45 is considerably larger than the 9mm, .357 Mag and .44 Special guns. The diameter is 1.617 inches compared to the 1.452-inch measurement of the other frame size. This, along with the large-diameter holes in the cylinder and barrel, gives the .45 ACP model an aggressive look. The sights are the standard grooved topstrap rear and front ramp. I found the Pitbull to shoot a bit high with 230-grain Winchester hollow points (HPs). I didn’t have any 185-grainers, but I suspect they’d be pretty close to spot on, based on past experience.

The trigger is crisp and precise in SA and a bit lighter than average in double action (DA). It’s not buttery smooth, but it’s easily manageable with a slight bit of stacking as the bolt drops into the cylinder cut. I like this kind of trigger because it allows for precise DA trigger control. The hammer can be cocked and the cylinder rotated as the gun comes back on target, and when the sights line up the last pressure can break the trigger. I test concealed-carry guns at 7 yards, and at this distance, firing deliberately in DA, my groups measured less than an inch. This is more than adequate for a CCW.

The finish on the test Pitbull is a matte stainless that gives the gun a neutral grey look. The parts are well machined and fitted for a functional working gun. The recoil was manageable but stiff. The black synthetic grips have enough checkering and tackiness to provide a good grip. The finger grooves fit my hands well and allowed a solid feel with all three fingers on the grip. For accurate DA shooting, the trigger finger must extend well into the trigger. I like the trigger to nestle just next to the first joint. With some gun grips, this arrangement can cause the trigger to pinch the flesh of my finger between the trigger and the frame. Standard Charter Arms grips fit me perfectly, however, in this respect with no pinching.

My .44 Bulldog sports a set of Crimson Trace Lasergrips, something I recommend for every concealed-carry handgun. Seventy percent of defensive situations occur in low light, and under many of these conditions seeing your sights is almost impossible. I recommend the laser be adjusted with the beam slightly lower than the sight plane, so the shooter can’t see it while getting a proper sight picture. This prevents the temptation to completely rely on the laser for sighting. Lasers are remarkably reliable, but I don’t want my ability to shoot well to depend on the life of a battery. Practice with the sights but rely on the laser when you can’t see them.

While I like the Bulldog .44, I see advantages in the .45 Pitbull. I have a friend who refuses to own a gun chambered in a caliber you can’t buy at a local “super store,” and I agree that this makes some sense. I suspect .45 ACP ammunition is offered in as many locations as any other caliber, except maybe 9mm and .38 Special. Also, finding high-quality defensive ammunition in .44 Special is problematic. There are probably more than two dozen excellent defensive loads available in .45 ACP, and even common hardball .45 is superior to the standard 240-grain lead .44 Special loading. I think the small difference in ease of loading is far out-weighted by this advantage.

For obvious reasons, I’m a fan of the .45 ACP cartridge. It’s powerful, offers great penetration, makes a large wound channel and is readily available in a wide range of loads from low cost to high performance. I’m also a fan of revolvers for use by those who practice concealed carry. Our needs are different from police and military operators with most encounters being closer range and with a lower round count.

The .45 ACP Pitbull is an innovative, accurate and powerful revolver that’s small and light enough for concealed carry. It would certainly be effective for self-defense and could serve those spending time in bear country. It’s reasonably priced and chambers one of the most popular rounds. Charter’s new .45 ACP revolver fills a legitimate gap in today’s extensive lineup of available handguns, and that’s quite an accomplishment. For more information, visit charterarms.com or call 203-922-1652. 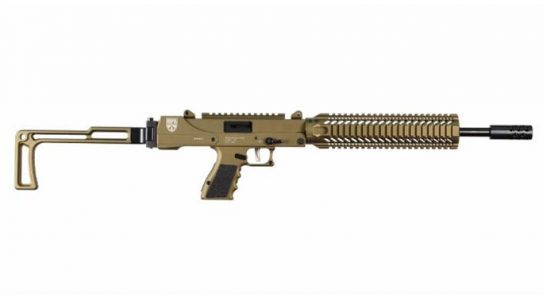 The all new MPA20DMG from MasterPiece Arms features a lightweight lower receiver that is...