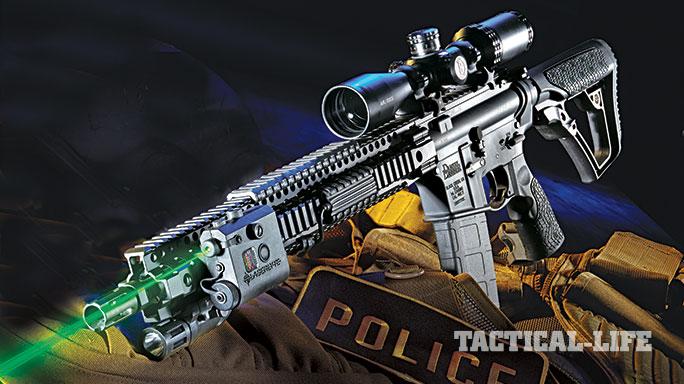 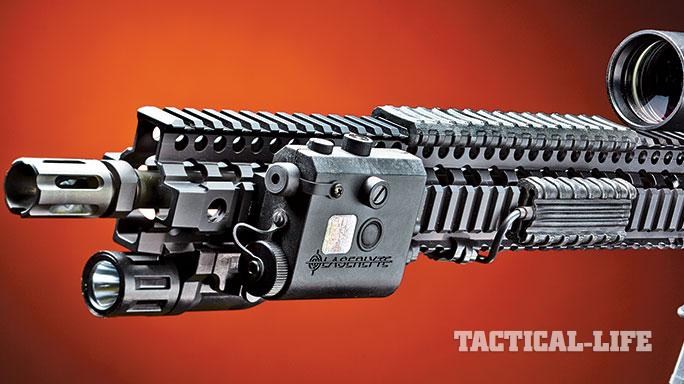 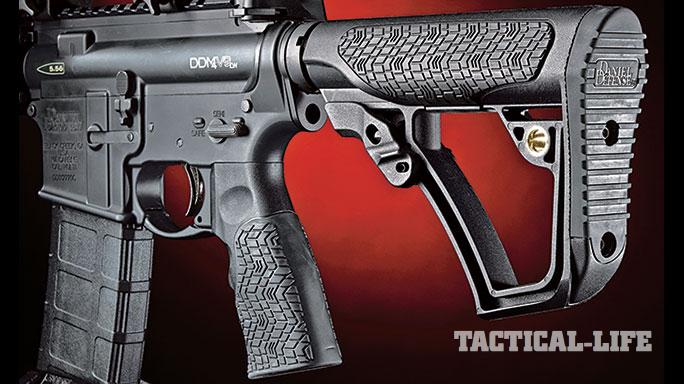 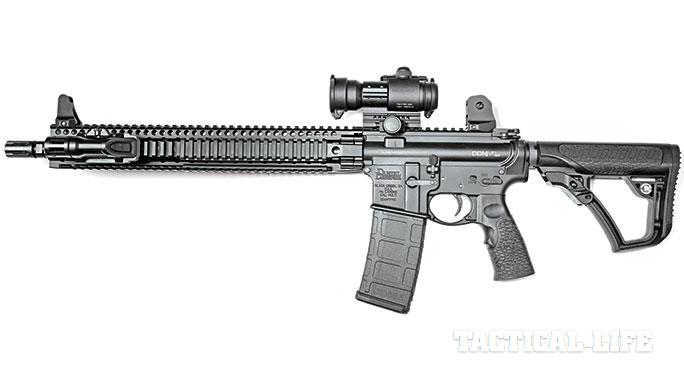 4 of 8
Gun Review: Daniel Defense’s DDM4V9LW 5.56mm
The carbine has a long top rail for mounting sights and optics like the Aimpoint PRO. 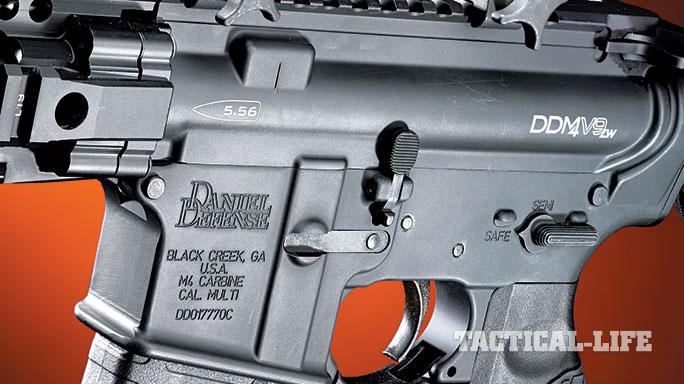 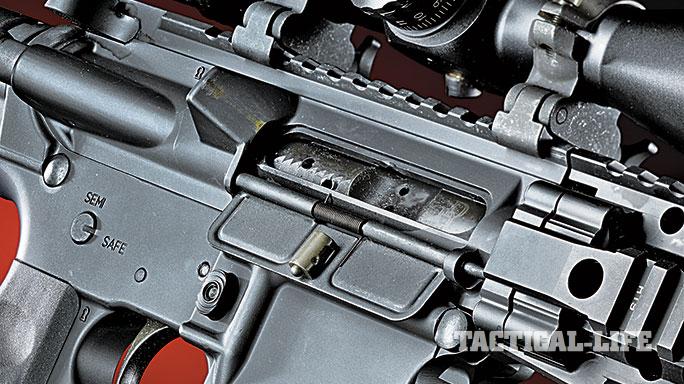 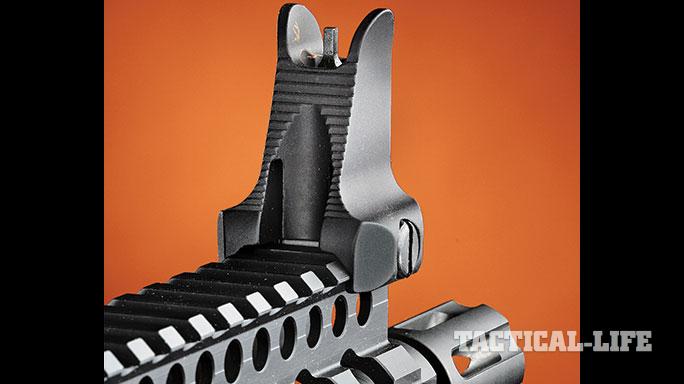 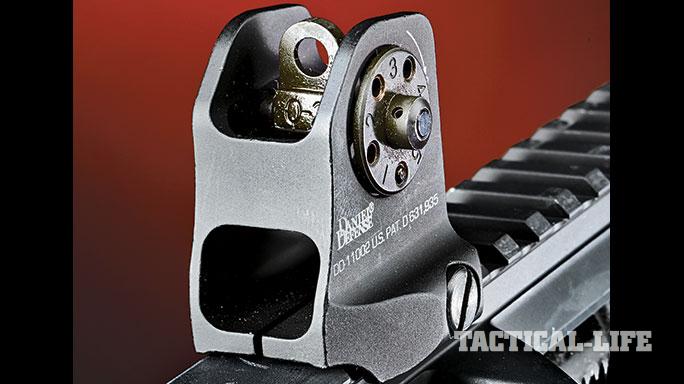 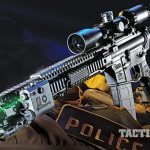 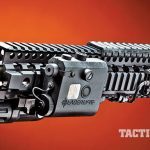 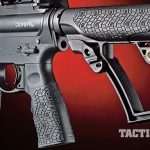 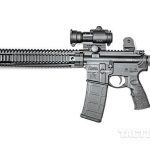 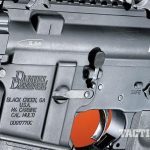 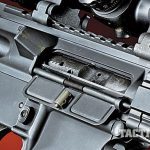 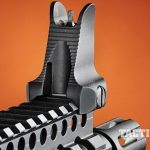 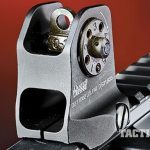 Of all the “black rifle” companies, Daniel Defense has established an identity and reputation that can be best described by the military term “Tier One.” In 2000, Marty Daniel founded Daniel Defense with only one product, a lowly sling adaptor. The company came to the attention of the military community when the Army Marksmanship Unit adopted the Daniel Defense free-floating, quad-rail forend for the new Designated Marksman Rifle (DMR) program. The company’s next big success was the Rail Interface System (RIS) II, which was designed to meet a USSOCOM requirement for a free-floated barrel with the ability to mount an M203 grenade launcher. After extensive testing, USSOCOM selected Daniel Defense as the sole source provider for the RIS. As this is written, Daniel Defense has delivered more than 30,000 RIS II handguards to USSOCOM and other military units.

Daniel Defense has grown from humble beginnings to having two production and assembly locations. While maintaining its original 38,000-square-foot production facility in Black Creek, Georgia, the company also has a 90,000-square-foot assembly and shipping facility in South Carolina. This has enabled the company to expand and be more efficient in meeting the demands of the market.

What sets Daniel Defense apart from others is the company’s total commitment to quality. To that end, Daniel Defense manufactures, in house, nearly every component of its rifles. This not only includes the barrels, upper and lower receivers and fire control parts, but also extends to pins and small components. Daniel Defense is one of a few companies in the United States that produces hammer-forged barrels. This capability also allows Daniel Defense to be the OEM supplier to other manufacturers. Recently, I received the new DDM4V9 Lightweight (LW) for testing.

The DDM4V9 series is the latest to represent Daniel Defense’s philosophy of “lighter, stronger, better.” The DDM4V9LW combines a mid-length gas system with a 16-inch, lightweight-profile barrel and a 15-inch DDM4 Rail handguard that is machined from 6061-T6 aluminum. The combination makes for an attractive and functional carbine. The DDM4 Rail, while being a traditional quad-rail, is designed to minimize bulk. Its 15-inch length provides room for accessories and an extended sight radius when using iron sights.

As previously stated, Daniel Defense’s components are manufactured to exacting mil-spec standards, with all of the major parts being produced in-house. The lower receiver is machined in-house from a forging to military specifications and features a flared magazine well. The upper receiver is also machined in-house and has the standard brass deflector, forward assist assembly, M4 feed ramps and a Picatinny top rail with indexing marks. The bolt carrier group is magnetic-particle (MP) inspected and chrome-lined, with a gas key staked per military specifications.

At the heart of every Daniel Defense rifle is its cold-hammer-forged barrel. The DDM4V9LW’s 16-inch barrel is forged from a chrome-moly-vanadium steel blank and features a lightweight profile and a standard 1-in-7-inch twist rate. The bore is chrome-lined, while the exterior has been coated with a phosphate finish. The flash suppressor is Daniel Defense’s own design, and it’s more efficient than a standard M4 unit. The internal fire control components are standard mil-spec, and the test rifle’s trigger broke at 8.13 pounds with an appreciable amount of creep. They now offer 2 upgraded Triggers: Geissele SSA two-stage (2.5 lb Take-up and 2.0 lb Break) and the SD-3G (3.5-4.5 lb).

My test rifle came equipped with optional Daniel Defense fixed iron sights. These sights are manufactured out of aircraft-grade 6061-T6 aluminum and then finished with a mil-spec hardcoat anodizing. The design of the sights minimizes the footprint on the rail, allowing space for additional accessories. The front sight utilizes a sight post, while the rear sight uses an A2 aperture with A1 adjustments. Both the front sight blade and rear sight aperture are protected by wings. These are rugged sights that are designed to withstand hard use. While flip-up sights are the rave, I grew to like Daniel Defense’s fixed sights for their clean sight picture and compact design.

In 2014, Daniel Defense introduced an OEM buttstock and pistol grip. The buttstock is designed with a modular buttplate that allows the user to select from two different shapes. The release lever is ergonomically designed for easy manipulation as well as ease in removing the buttstock. Its soft cheek inserts are overmolded to provide a positive and comfortable cheekweld. The pistol grip features an integral, oversized triggerguard, finger recesses and similar overmolded inserts. The grip has a reduced angle that I found more comfortable than a mil-spec grip.

The DDM4V9LW is approximately 5 ounces lighter than the standard DDM4V9 without sacrificing any of the other benefits and features. The DDM4V9LW, while being a standard-length carbine, is well balanced and easy to manipulate. My first trip to the range with the DDM4V9LW was very informal and designed to get the feel for the carbine. During the testing, the DDM4V9LW proved 100-percent reliable with a variety of ammunition. The rifle swung easily, and I benefited from the extended sight radius. Hitting informal targets the size of ping pong balls at 30 yards or so proved almost too easy.

For formal accuracy testing, I mounted my 2.5-8x36mm Leupold Mark 4 MR/T M2 scope with a LaRue SPR mount. The TMR reticle and brilliant light-gathering capabilities make the Mark 4 series of scopes ideal for the law enforcement community. I have found this particular optic to be extremely versatile, and it has become my go-to glass. I tested the rifle’s accuracy at 100 yards with three loads: ASYM Precision’s 70-grain Barnes TSX ammunition, as well as Hornady’s 55- and 62-grain TAP ammunition. The ASYM load averaged 2,593 fps and produced a best five-shot group that measured 0.86 inches. The 55-grain TAP, which is one of the best general-purpose duty rounds on the market, averaged 2,810 fps and produced a best group that measured 0.9 inches. The 62-grain TAP Barrier is designed to penetrate barriers and still provide effective terminal ballistics in soft tissue. The 62-grain TAP averaged 2,720 fps and produced the smallest group of the day at 0.79 inches. The DDM4V9LW exceeded my expectations with all three loads. This can be directly attributed to the Daniel Defense barrel and the company’s attention to detail and quality. The mid-length gas system softens the recoil impulse and enables faster follow-up shots.

For those who do not need a magnified optic, the Aimpoint Patrol Rifle Optic (PRO) is ideal for the DDM4V9LW. The PRO is designed to offer all of the advantages of the higher-end Aimpoint optics at a more affordable price point. As with other Aimpoint optics, the body of the PRO is machined from a solid billet of aircraft-grade aluminum. A single CR1/3N lithium battery powers the PRO, providing over 3 years of continuous runtime on daylight settings. The 2-MOA dot features four night-vision settings and six daylight-visible settings. The PRO comes standard with an integral QD mount and front and rear lens covers.

As a full-time law enforcement officer, I recognize the need for a white light on a patrol rifle. In keeping with the lightweight theme, I selected the WML from Inforce. The WML is a polymer weapon light that is only 4.1 inches in length and weighs a mere 3 ounces. An integral mount reduces both its profile and its weight. A single CR123 lithium battery powers the WML and its 200-lumen LED. My test unit was a white light only that was set up with a momentary-only switch. The angled switch is easy to manipulate and eliminates the need for tape switches. Other options are available, including a white/IR light for use with night-vision optics.

Every rifle should have a sling. For the DDM4V9LW, I chose Blue Force Gear’s excellent Vickers 221 sling. The 221 is equipped with both the Rapid Emergency Detachment (RED) swivel and the Burnsed socket. The RED is a QD system that allows the user to detach the sling by applying 7 pounds of force to the conical knob. The sling-mounted Burnsed socket allows the sling to be configured for single-point use. The sling is extremely versatile, and its length can be adjusted with only one hand. The patented design eliminates having a long tail.

The DDM4V9LW is ideal for general use or as a law enforcement patrol rifle. The combination of the lightweight, 16-inch barrel and 15-inch handguard gives the rifle excellent balance. The longer handguard also provides additional protection for the barrel during hard use and/or storage. Even with the long handguard, the DDM4V9LW only weighs 6.34 pounds unloaded. The DDM4V5, which has a 12-inch rail and a standard-profile barrel, actually weighs more at 6.44 pounds. For users that prefer a standard-profile barrel, Daniel Defense offers the DDM4V9, which shares all the features of the Lightweight model and weighs 6.59 pounds.

The absolute requirement for any weapon that is used by those who go into harm’s way is reliability. Daniel Defense is committed to building the best rifles humanly possible. I’ve visited the factory and met with many of the employees, and I came away with a feeling of pride knowing that my fellow Georgians were committed to Marty Daniel’s philosophy of “lighter, stronger, better.” The DDM4V9LW is only the latest in a long line of rifles that continues to set new standards for the industry. 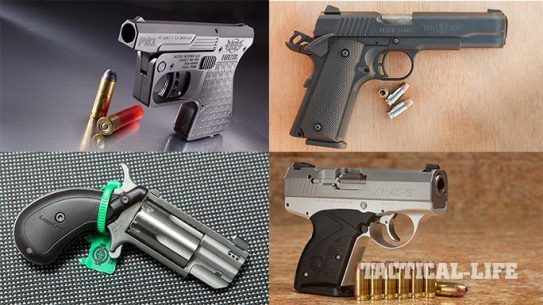 These subcompact pistols are built for the ultimate in deep-cover carry and concealment. Read...